A sting in the tail for the winner of Longman

Freelance journalist James Rose visits the Queensland seat of Longman and finds that whether pint-sized MP Wyatt Roy holds on or not, victory might not be all it's cracked up to be. 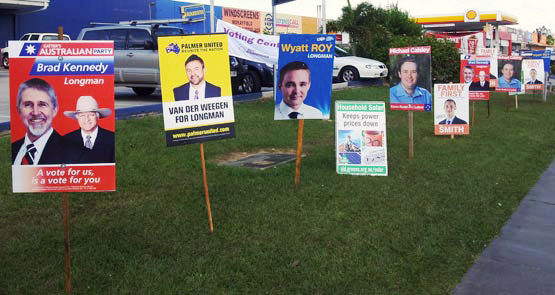 In King Street, Caboolture, just outside the police station, local member Wyatt Roy chats with a few coppers, at a slight remove from a cameraman with a mic. As I’ve just parked the car, having got lost looking for his office, this is a lucky break. I approach and introduce myself, and we set up for a chat. Around us, as the sun opens through the sky, the Longman electorate breathes. If Longman were a person, it would likely be a cranky old cocky who still has to go to work in his dotage because his grandkids are out of work and live with him. As one of the more marginal seats in the country, and in the hotly contested state of Queensland, Longman is crackling days out from an election. And Wyatt Roy may yet cease to be the world’s cutest MP.

Looking like Tintin has gone Mormon, with his tufty blond hair and in his blinding white shirt and tie, 23-year-old Roy seems to have absorbed the dark arts of politics without losing the sweet and shiny glow of youth. The Liberal lines are trotted out: carbon tax, unemployment, cost-of-living, homelessness, the mining tax and security — the latter a reference to a local CCTV initiative he has just announced to the media throng of one.

“This is where government is formed,” he suggested, shamelessly talking up the weight of the seat.

All done, the honourable member for Longman wanders down the street with his advisers in tow, and you have to wonder: looking like he fell out of a Herge comic? Coalition values? Could this be a love child of the two leaders? As a face for election 2013, you could do worse.

CCTV? Suggests a community that doesn’t trust itself, and perhaps doesn’t trust much at all, including politics. Election time gives everyone a chance to flick that reflex.

Down along Moreyfield Road, harsh, blustery Queensland light seems to toughen the environment and those that people it. Talking to folks going about their day about the Big Poll, there is a common response: a pause and then something like, “I’d rather not talk it, if that’s OK”. That, to me, suggests they’ve got a lot to say but would rather keep their counsel. It’s as if they are aware of the issues and aware of the value of their votes in this hot seat.

Some were willing, and what they offered suggested a well-informed and thinking electorate. Sam, a 20-something manager in a sports store, opened up that he’d be looking to vote Greens. “I’m worried about the big parties and the money they’re spending. They shouldn’t promise so much. The Greens seem more passionate. We need more jobs here and to find ways to bring the community together, so it’s not so divided.”

“Sarah”, a real estate agent over the road, says she is concerned about small business issues and unemployment, and will likely vote Liberal. “We need a change,” she offered, before answering her phone.

Whoever makes the For Lease signs here is onto a winner. Empty is a growth industry. They wobble in admonishment with every gust of breeze. Unemployment, according to Roy, is at 8%, and youth unemployment is as high as 12%. The For Lease signs are cries for help in a struggling town. The local rag, the Caboolture Shire Herald, reports on homelessness across pages four and five, along with a young family’s food crisis. There’s an editorial on homelessness on page 11 next to a letter to the editor on high water costs. There’s a piece about high demand in op shops on page 13. These are not golden times in Caboolture, and the electorate seems willing to reflect on that as the election cycle peaks.

“The Australian Electoral Commission classifies Longman as ‘provincial’, which seems a bit patronising.”

ALP candidate Michael Caisley’s store-front is an odd one for a campaign office. Well out of sight, round the corner behind an LJ Hooker, off the main drag of Morayfield Road, it’s in the shade when I arrive, like it’s too shy to come out. You’d miss it even if you knew it was there, which I nearly did.

The candidate is in, but he’s on the phone — was that him I heard saying uncomfortably “Yes, OK, of course, I’m sorry” to someone on the other end who apparently didn’t warm to the local wannabe troubling their lunch? His campaign guy is trotted out to tell me; they will have to check with Labor HQ before talking to media. Even the campaign boss didn’t want to go on the record without approval. Seems like the ALP doesn’t entirely back its Longman boy and would rather cotton-wool him, an odd strategy perhaps, given the tilt of the seat. Caisley’s slogan reads “Working Hard for Longman”, and you get the feeling he’ll have to. It looks like a non-campaign from where I’m standing.

I am told they will check with Sydney and call me back. They never did.

The Australian Electoral Commission classifies Longman as “provincial”, which seems a bit patronising. I guess it means it’s largely rural, with some largish urban centres dotted throughout, of which Caboolture is the largest. The AEC lists its industries as fruit and flower farming. And pineapples. Inexplicably, it doesn’t mention strawberries, giant fibreglass versions of which can be found along main roads and thoroughfares in the region, enticing gastronomes and jam freaks.

There are other farm types here too, like beef, pigs, chooks, prawns and grains. Proximity to the big smoke and the tight concerns of urbanity — Caboolture is only around 30 minutes north of Brisbane — and a farmer’s broad space conservative values seems to have crafted a particularly unpredictable voter here. Even the geese, as a sign in the local park informs, are nasty and not to be messed with. Lots of strawberries maybe, but no rubes here in Longman.

Both Wyatt Roy and the ALP guy (whose name I was asked not to record) tell me the race is 50/50. Most say that of course, but it seems there’s no spin in that statement just days out from the national poll. In 2010, on a two-party preferred split, Roy’s LNP fell over the line with 1.9% or roughly 1500 voters to spare. He gained just under 44% of the primary vote. And that was after his ALP opponent put himself in a cannon and shot himself out of the race when he publicly laid into a seven-year-old disabled kid’s dad for staying for two years on the Queensland Health wait-list.

Strawberries have an effect on some people of leaving a bit of a rash around the lips. It may have something to do with the pesticides used on them, which can be pretty frightening. On Saturday, Longman may have the same effect. Whomever wins the seat may carry a nasty memory of the pleasure and will be obliged to remember that the sweetness of victory in Longman may not last, well, long.

Thanks James, I’ve enjoyed your reporting in recent weeks.

James Rose. No surprise with Labor being struck dumb when confronted with a journalist toting a microphone. Labor know they have nothing but dated dodgy and tired spin. What is left of Team Labor are already suffering political wilderness shock. Edward James