Unsung policy issue: when you have no home to go to

Remember when tackling homelessness was a major priority? Well it hasn't been in this election campaign -- and the number of homeless people is rising. Freelance journalist Henry Belot asks some tough questions. 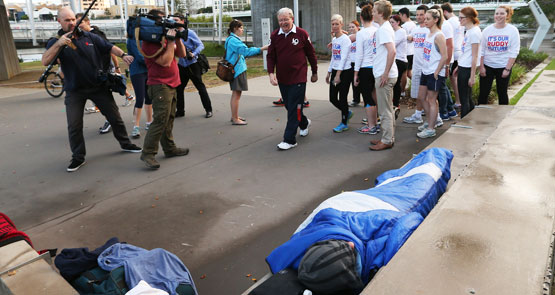 In Kevin Rudd’s first stint as prime minister he made much of his plans to help the homeless, vowing to halve homelessness by 2020 and offer supported accommodation to all rough sleepers who needed it.

In this election the issue has barely rated a mention, let alone extra funding. Amid this silence, the number of homeless people on our streets is rising.

Just 12 months after Rudd was elected in 2007, he and then housing minister Tanya Plibersek launched the white paper The Road Home, mapping out how to achieve Labor’s targets. Did it work? Almost 90,000 people considered themselves homeless in 2006. This rose by 17% in 2011, when 105, 237 people considered themselves homeless, according to the Australian Bureau of Statistics. More recently, the Australian Institute of Health and Welfare reported that 157,000 accessed homeless services in the six months between and July and December 2012 — an increase on the 2011 census figures.

James Farrell, a lecturer in law at Deakin University and former manager of the PILCH Homeless Persons’ Legal Clinic, told Crikey that while it was notoriously hard to measure rates of homelessness, there was evidence that the problem was worsening.

“Despite significant investments, particularly on housing through the economic stimulus package, over 100,000 Australians are homeless on any night,” said Farrell. “There’s more and more families becoming homeless, with almost one in five users of Australia’s specialist homeless services aged under 10.”

This disturbing trend was also noted in a 2013 study by the Salvation Army, which found that 33% of the nearly 3000 people who relied on the organisation’s homelessness services identified themselves as single parents, with 61% of the entire sample being women. The study also found that 13% of respondents identified themselves as couples living with one or more children.

Fast forward to the election campaign 2013. Neither Labor’s ambitious plans, nor the increasing rates of homelessness, have raised more than a passing mention.

On August 5, federal Minister for Housing and Homelessness Julie Collins reaffirmed Labor’s commitment to halving homelessness by 2020. A Labor campaign spokesperson told Crikey that $320 million of joint funding was provided through the transitional National Partnership Agreement on Homelessness in 2013-14. “This includes $150 million from the Commonwealth, which is accounted for in the 2013-14 budget,” the spokesperson said.

As for the Coalition, which is likely to win the election, it has not yet committed to signing another four-year agreement with the states and territories (the transitional National Partnership Agreement on Homeless will expire in 2014). This is despite the Coalition promising to combat the causes of homelessness.

“At the moment, if I’m frank, the potential for a new agreement doesn’t look good,” Toby Hall, the CEO of Mission Australia, told Crikey. “The various players almost outdid themselves not to sign the one-year extension of the original agreement with political point-scoring, delays and back-biting. It will be a small miracle if we can get all sides at the table to sign on to a new four-year deal.”

In June, the Greens announced their Homelessness Action Plan, which aims to provide accommodation for every rough sleeper by 2020 at a cost of $233.2 million per year, and to double funding for specialist homelessness services provided under the National Affordable Housing Agreement. That would cost $507 million per annum.

So there are some policies out there, but the general silence on the issue this election has been noted by homelessness services. “There has been practically no mention of homelessness in this election campaign,” said Farrell. “While the campaign has focused on make-up artists, missed baby-kisses and twerking, serious social policy issues like homelessness are being ignored.”

Hall agrees: demand for his organisation’s services had increased in recent years. “While I don’t doubt the Prime Minister’s earnest desire to tackle homelessness, nor the Opposition Leader’s passion for the same subject, it’s true that during this campaign, homelessness and housing have been conspicuously absent from discussion and that’s a disappointment,” he said.

The issue of homelessness is a complicated issue that cannot be resolved through government funding alone. But Zach Wheeler, executive officer at the Father Bob Maguire Foundation, told Crikey that the lack of a national discussion during the campaign is restricting public awareness of rising rates of homelessness.

“As the major parties avoid the issues that seem controversial, we avoid recognising a growing homeless population or rising poverty in Australia because it does not fit the vision of 21st century Australia,” said Wheeler.

In addition to unlocking commonwealth owned land and taking control of hospitals, tackling homelessness is yet another broken promise from the ALP.

Listen up, Duke – The Labor Party has a policy of on-going funding out to 2020 to deal with the homelessness problem. Would you care to let us know about the Coalition policy? No? Thought not, because THEY DON’T HAVE ONE.
Makes me sick that all these people contacted/quoted here, know this, yet they still want to sh+t all over the Labor Party, who is the only party who can realistically do anything about the problem.
Yes the Greens policy sounds wonderful, but it is easy to promise stuff, which costs money, when you are never going to be in a position to deliver anything. All care and no responsibility – that’s the Greens for you.
And if so many people want something done about the problem, Henry, why have you not floated the idea of increasing tax revenue to pay for it? All these ‘do-gooders’ are dreamers. Just ask how many people would like to pay a 5% tax surcharge for X years to fix homelessness? I reckon it would be about ZERO. Wank+rs!!!!!

I hope that was a staged pic – imagine being the bloke in the sleeping bag being woken from White Lady’s embrace by cameras, Krudd and the scrubbed claque of T-shirted young Ruddbots!