Seafood haunts Slipper. A Queensland tipster has been on the scout for Crikey:

“There used to be a fish and chip shop in that block of shops where Peter Slipper and Mal Brough’s electoral offices are. Was down there the other day and noticed it has closed. Funny how something as innocuous as going for take away fish and chips can get out of hand!”

Our stringer is referring of course to the trouble former speaker Slipper got into when it was revealed he had allegedly likened female genitalia to “bottle of shell less Mussells” in a text message.

The readers are revolting. This from a passer-by:

“There was a protest outside News Limited at lunchtime yesterday. About 20 senior citizens protesting against Murdoch’s domination of the election. But apparently they were so busy holding signs and taking selfies, they weren’t actually protesting.” 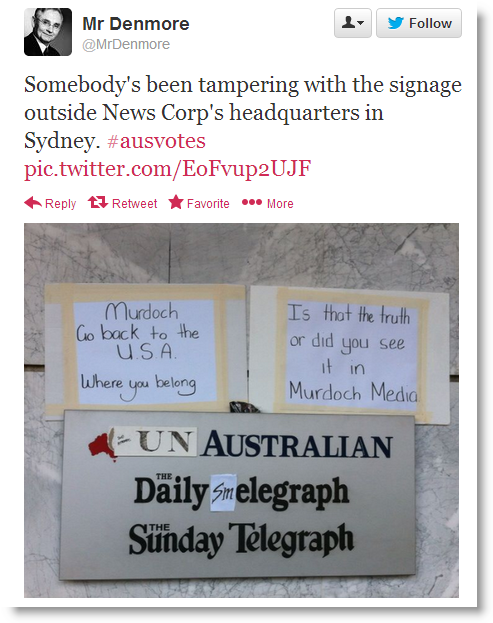 Dirty tricks in Melbourne. Oh dear, looks like the campaigners in the tense seat of Melbourne, where Adam Bandt and Cath Bowtell are fighting hard, are breaking the unspoken code of chivalry and good conduct that should govern the street teams.

It cuts both ways; apparently Labor corflutes were found “dumped next to a bin in Carlton Gardens. They put up way too many around the one area, but it is still an offence to take them down.” Play nice, Melbourne! But is it true that the same company, Plakkit, puts up posters for both sides?

Hey there, have you heard, the Coalition’s NBN is a real turd. What do you do to promote your party if you’ve got no money? You write some songs and sing them on the train. We enjoyed this vid of an enterprising Greens troubadour — his song about the NBN is better than the carbon tax, IMHO. He gets a few claps.

Election merch. Crikey had some fun yesterday bringing you the wackiest merchandise of the election campaign (a kind reader is posting us a freshly laundered Craig Thomson T-shirt). A reader found this on eBay:

DLP jacks up over gay marriage. Voters in Sophie Mirabella’s seat of Indi have been rocked by dubious campaign material mourning the erosion of “man-woman marriage” by same-s-x marriage agitators. The material hit letterboxes in Benalla this week and were authorised by Jim McCormack, a local DLP member who has written to the Border Mail campaigning for the return of the incumbent Liberal MP. McCormack told Crikey this morning that “the children are the main concern. All of us have seen instances of abuse, and that’s coming home to roost now.” The DLP is not running a candidate in the seat, but the material urges voters to put independent Cathy McGowan, Labor and the Greens last.

Clive “the Spam” Palmer. Plenty of readers have got in touch to say they’ve been spammed by the Palmer United Party. Can you send us the emails you’ve received? We’re looking into this issue for you.

… and now for something completely different. Enough of the election! A tipster reckoned the HMAS Canberra was being used as a “floating hotel off Manus Island” and hinted that “boat folk” may be being accommodated on naval vessels (at least that’s what they seemed to be hinting).

Now, we already know that the HMAS Choules is at Manus Island (PNG), providing floating accommodation for Australians working at the detention site — but is there more going on? We checked our tip with Defence, who promptly told us that the HMAS Canberra was in Victoria, it was not going to be sent to Manus Island, and no Defence vessel was being used to house asylum seekers at Manus Island or Nauru. About 230 civilian personnel were “embarked” (whatever that means) on HMAS Choules, Defence added.

So we rate that tip as a bum steer.

The aftermath of terror

Given Crikey’s based in Melbourne, I thought you may have seen that great grey block sitting at the Williamstown dockyard, the one that formed a backdrop to the PM’s defence industry speech last week. Bit hard for it to be at Manus as the damned thing’s not finished yet.

Dirty tricks in Melbourne. it is about time the political shonks and cheaters stopped conducting their political campaigns outside the law. How do these hypocrites and their supporters go about asking people to give there votes in trust while actively campaigning outside the law? That being the Graffiti Control Act 2008 Section 6 in NSW. I expect there will be similar legislation being ignored in other States and Territories. It is not funny to have party leaders like barry o’Farrell telling shock jocks he wants to crack down of graffiti when the Premier has no problem with Liberals putting core flutes on railway fences, power and light poles. The penalty is four penalty units for each offense much better revenue than parking fines for lazy councils. Edward James