Moving briskly on from the current election, which is all-but-decided anyway, the media are wondering what will happen when an Abbott government tries to repeal the carbon tax.

Campaign reading. They really have moved right on from predicting what will happen on Saturday. Consider these stories from the morning’s papers. “Labor threat on tax could trigger poll” projects us forward to the possible election after this one. Then there’s “Election wipeout could be catalyst to start Labor’s healing” speculating about Labor’s leadership successor to Prime Minister Kevin Rudd.

Paul Kelly in The Australian takes us in “Labor trapped on carbon price” forward to a Senate where an Abbott government does not have a majority:

“It is time to confront the post-election reality — within months of any Tony Abbott election victory the Australian Parliament will vote for the carbon tax, an emissions trading regime and pricing carbon in defiance of Abbott’s mandate.

“Labor intends to fight Abbott on climate change after the election …

“The consequences of Abbott’s legislation being defeated in the new parliament, via the Senate vote, will be immense, wild and bitter. Anybody who thinks this election will resolve the great climate change conflict is dreaming.”

Michelle Grattan at The Conversation also turns her attention to how a Labor opposition would react to Coalition moves to scrap the carbon tax. “What you think about mandates depends on where you sit” differs from the Kelly view because “what position Labor in opposition actually took would depend on who was leader, what condition Labor was in and how an Abbott government was travelling”.

The economics writers for the Fairfax stable take their normal considered and sensible look at the past and make some predictions about the future as well. For The Age’s Tim Colebatch there is more than a hint of sympathy for Labor in his “Taking the prize, losing the plot“ — “The Labor government oversaw one of the world’s best economic performances and then lost its way. Where is Tony Abbott heading?”

Colebatch expects the Coalition MPs to switch from being wreckers to managers. On many issues, he sees, its differences with Labor have shrunk as the election has drawn near.

“Let me make a fearless prediction: should the Coalition win the election, we’ll hear precious little more about the evils of ‘debt and deficit’ …

But once the Coalition was back in power its need for fear-mongering about debt and deficit would disappear and it would face the same struggle to get the budget back to surplus that Labor faced.”

Back to the present. Jared Owens and Ean Higgins in The Australian write of “Tales of murder, corruption and political intrigue: when smears get out of control” in the battle for the Sydney electorate of Treasurer Chris Bowen.

“A fortnight after Chris Bowen attempted to smear one of his state’s most esteemed police commanders by tying him to convicted criminals, the Treasurer is himself the target of a smear linking his record as a local councillor to the killer behind Australia’s first political assassination.”

Other views: blogs and tweets of note. Some 42% of 3MMM listeners do not know how the other people in their household intend to vote.

Campaign listening: 3MMM Melbourne. Ah, how things can change. There this morning pounding the footpath through Federation Square was Kevin Rudd and over in New York Lleyton Hewitt was cruising along leading 5-2 in the fifth and final set. Eddie McGuire suggested it might be an omen for a political comeback kid.

But as Kevin proved that he could both walk and talk at the same time, while he and his crew proceeded on towards the Cathedral with the PM stressing that if you have doubts about Opposition Leader Tony Abbott then don’t vote for him, Lleyton fell in a heap. Yesterday’s hero remained just that as the talk turned to broadband and how arrogant it was of Deputy Opposition Leader Julie Bishop to be talking of pulling the appointment of former Victorian premier Steve Bracks to New York as consul general before she even was the foreign minister.

Then there was the missed opportunity for the plodding PM to make a promise that would not cost a dollar while appealing to a Melbourne audience entering into its footy finals hysteria. 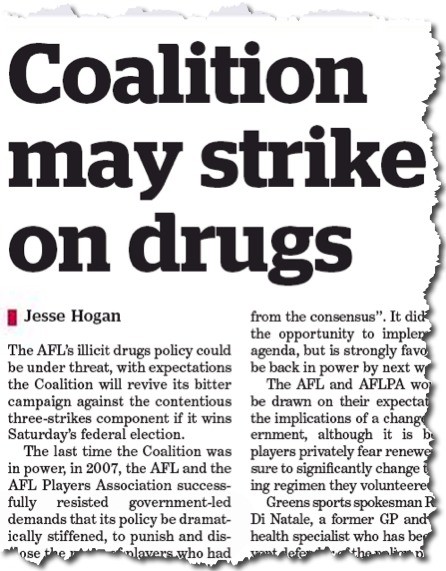 A free kick if ever there were one to say that Labor would not be meddling with that AFL policy. The Coalition campaign team were aware of the danger. They phoned in with a statement from Opposition Leader that the story was not right. There was no intention of changing the three strikes and you are out component, and that assurance met with the approval of the MMM breakfast team.

The nightly television news. Perhaps Abbott was just doing a promo yesterday morning when he appeared in the suburban Adelaide kitchen for a cuppa with the touring media pack in tow. For tonight is his appearance on ABC television in his own kitchen for a chat and cook-up with Annabel Crabb. A better choice for a campaign finale on the national broadcaster than Q&A would have been whatever the policy purists might think. And safer too, as Rudd discovered last night when the television had religious dignitaries accusing him of wrongly quoting the Bible the night before.

Go for the election bragging rights. Yesterday’s entries by bites readers in our pick the winners survey followed the guide offered by the pollsters and moved towards expecting a Coalition victory on Saturday. The expectation now is for the Coalition to win 83 seats, Labor 64, Greens 1 and others 2. To submit your prediction Enter HERE. There is a Crikey prize pack for the first correct entry received along with some very prestigious bragging rights.

If, as Abbott has called his election, it is a “Carbon Tax referendum”, wouldn’t you think he’d need a 50%+1 of the primary vote as verification of his bona fides to scrap it?

On the question of mandate, Mark Butler made a good point yesterday in pointing out that both Labor and the coalition had a “mandate” following the 2007 election, but the Libs rejected it. Bit ironic that Rabbit now wants to insist on a mandate.

Sorry – meant to be clear, the mandate was to introduce an ETS – a price on carbon!

“It is time to confront the post-election reality…”

What a fatuous statement from Paul Kelly. Does it really need saying that the time to confront post-election reality is, manifestly, after the election? Kelly appears to be trying so hard to get ahead of the curve that he’s disappeared up his own proverbial.