As the dust settles on Labor's time in office, we can see Australia's economic growth performance under Labor was a stand-out. 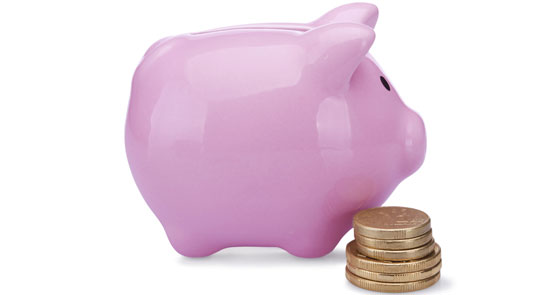 While the complete economic picture from Labor’s time in office will continue to filter in over coming months, today’s GDP numbers are last major economic evidence before the election. GDP performance up to and including the current quarter won’t be available until December, by which time it looks like an Abbott government will have released its first mid-year economic and fiscal outlook.

Labor’s performance on economic growth has been a strong one compared internationally. Although we trailed high-growth economies like South Korea and the broader G20 grouping for much of the last five years of the Howard government, Labor maintained growth during the financial crisis, when we critically avoided two quarters of negative growth. After the GFC Australia performed more strongly than most other developed economies, certainly in comparison with the eurozone, which has endured a depression, and the United States, which is only now starting to recover from the deep slump that began in 2007. Also notice that Australia’s out-performance of the eurozone and the US didn’t begin with the financial crisis, but in the last year of the Howard government. 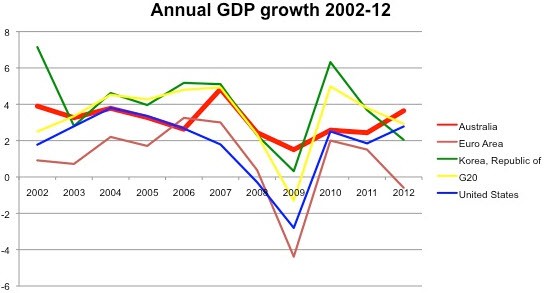 Australia became the 12th largest economy in the world last year, buoyed by a strong dollar, and even at its current valuation we likely still hold 12th spot. This isn’t unprecedented, as we explained last year: Australia has occupied that spot before, and even reached 11th in 1983. In its favour, Australia had not merely close links with China and the Rudd government’s stimulus package, but a rapidly growing population compared with most Western economies, particularly as expatriates fled collapsing overseas economies and returned home. But even when adjusted for both population increase and a strong dollar, Australia’s performance under Labor remains a good one. According to International Monetary Fund data, in 2007 Australia ranked 14th in GDP based on purchasing-power-parity (PPP) per capita. This year, we’re forecast to be ninth. All under a government derided as economically incompetent and reform-averse.

As today’s data indicates, however, Australia’s strong performance has begun to peter out as the transition from the mining investment boom proves more difficult than expected. Other, quite different, economies such as South Korea’s have also been struggling in recent quarters. Australia’s June quarter result of 0.6% and 2.6% for the 2012-13 year, however, still compares well to recent results from elsewhere — the eurozone produced 0.3% (Germany 0.7%, France 0.5%), UK 0.7%, US 0.6% and Canada 0.4%, while the South Koreans expect slightly stronger growth, having recently raised their forecast from 2.3% for the year to 2.7%.

So it seems likely Labor will end its period in government having come back to the pack in terms of economic growth. But in the interval, it has produced a stand-out performance while even other high-growth economies have struggled.

*Tomorrow: how the economy changed in six years under Labor

It won’t make a difference. Telegraph, Herald Sun, Australian, Courier Mail readers are convinced that the last six years have been an economic disaster and thus will vote for the party that, had they been in power, would have made sure that this had been the case.

But surely, if they have “delivered”, the mainstream viewsmedia would have relayed that, if they had any integrity?

And in another fairytale Roger Corbett declared his membership of the Liberal party today before slagging off Rudd too…….

Last w/e SMH’s Readers Poll has 86% of respondents considering the economy to be stronger or much stronger than 6 years ago yet the tories are surfing in as economic managers.

Apparently approx 52% of Australians are eager for Hockey to improve the AAA credit rating and raise the middle class standard of living. Can’t wait to see that.