Fairfax has posted a net loss of $16 million, prompting a major shareholder to dump some stock. 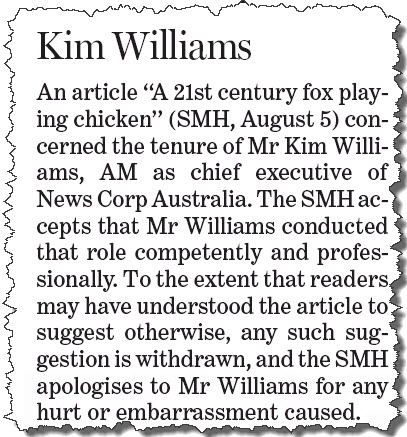 The article that so offended Williams was a August 5 piece by the SMH‘s Paul Sheehan. The conservative commentator wrote he could “attach credence to the widespread dismay within News Corp at the management style of Williams”. It seems Williams, now firmly ensconced in enforced retirement, has at least been talking to his lawyers regularly …

Fairfax shareholder selling up. A major shareholder in Fairfax Media has given the company’s weak 2012-13 result a big thumbs down by unloading more than 60 million shares in the past 10 days. In a filing with the ASX yesterday afternoon, MLC, the National Australia Bank’s funds management arm, revealed it had cut its stake in Fairfax to 7.010%, or 164.869 million shares, which is still a considerable holding. But that is sharply down from the 9.625% on August 23, when MLC selling started the day after Fairfax revealed a $16 million loss for 2012-13, thanks to another round of impairments and plunging ad revenues, with no sign of the company’s grim situation improving. All told, MLC sold 32.4 million shares from August 23 to August 29, and then a further 29.8 million shares from August 29 to yesterday, September 3.

UBS has been buying and then selling Fairfax stock over the same period. On August 27, UBS popped up again as holding a substantial stake of exactly 5% (the disclosure level), and two days later sold enough shares to drop below that level to no longer be a substantial shareholder. The selling and the indifferent reception to the result forced Fairfax’s shares down from the 58.5c on the day of the profit announcement to 52.5. They recovered to 56c yesterday.

The net loss of $16 million reported on an after tax basis was after impairment charges of $444.6 million (mostly on the goodwill in its rural and regional papers) and reported revenue of $2.03 billion for the year. In 2011-12, Fairfax posted a net loss of $2.7 billion on the back of write-downs of its mastheads. What worried  analysts was the weak performance of the Domain property business. Domain reported a 31% jump in digital earnings before interest, taxes, depreciation and amortisation (EBITDA) for the year to $29.4 million, compared with $22.5 million a year ago. But the print side of Domain recorded a 45% drop in EBITDA to just $12.1 million as print property ads plunged 33%. — Glenn Dyer

Selling off local news. News Corp has sold off 33 local papers in the US, thereby exposing the weakness of the Australian Stock Exchange, which last Friday gave News a month’s extension to file its 2012-13 results. The sale of the 33 papers to investors, led by hedge fund Fortress Investment Group, was announced overnight. The newspapers will be merged into GateHouse Media, one of the largest publishers of local print and online media in the US, with 400 community publications and approximately 350 related websites.

But not a word from News Corp CEO  Thomson on when News expects to release its results. Under US rules, it has until the end of September to release its results (in Australia a listed company has two months after balance date). News balanced on June 30 and 21st Century Fox, the bigger part of the Murdoch empire, filed its results and accounts in early August (a month ago this week). But Mr Thomson and the News Corp board and management could decide to sell these small newspapers and do a deal, but not compile the accounts of the company (which had been prepared up to March 31 this year, ahead of the split on June 28). — Glenn Dyer

Abbott’s for Sydney! No, wait, Melbourne! No, wait … Opposition Leader Tony Abbott has been giving a certain Australian capital his love, showering it with promises and telling its hometown Murdoch paper that it is his very favourite. Which city? Well, The Daily Telegraph today has an “exclusive” on its front page today saying Sydney will be the big winner in this election …

Sounds like he’s playing both sides against the middle …

Photoshop artists sharpening their styluses. It’s been very quiet around The Daily Telegraph‘s ridiculous graphics department lately, with no digitally altered images of Prime Minister Kevin Rudd as Rambo, a bank robber, Kermit the frog or anything else appearing since Paul Barry gave the Tele a serve on Media Watch almost two weeks ago. But they’re back. First up this morning is Deputy Prime Minister Anthony Albanese as a disheveled bureaucrat, with tasks piling up in his in-tray.

And later in the paper is a drawing of Rudd as Kermit the frog, again. The Tele seems to like the Rudd-as-Kermit motif — it first used it to show Rudd wooing Greens leader Christine Milne, and now to illustrate a Miranda Devine piece, “Kevin looks like a bit of a Muppet“. 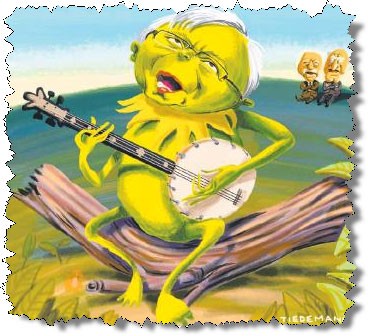 Re the Kim “bollocks” Williams’ apology. It seems he is happy to dish it out to assorted political targets as directed by Rupert but can’t take it.

A great crusader for press freedom against Labour’s proposed media regulator but calls in the lawyers when he feels he has been attacked. The word hypocrite comes to mind.

It’s like their idea of “the free market” – it’s only good when it works their way.
Like cultivated bacteria on the Right medium – “Murdophiles” grow on hypocrisy.