James Button on the death of the campaign speech

As the election campaign winds up, former political speechwriter James Button speaks to Crikey on the death of the campaign speech, the dangers of language, and why politicians steer clear of poetry. 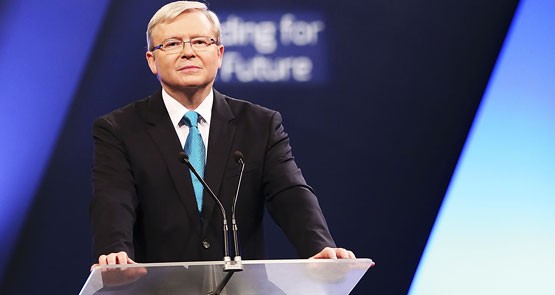 In 2008 during the Democratic presidential primaries, Hillary Clinton repeated an adage made famous by former New York governor Mario Cuomo: “You campaign in poetry, you govern in prose.”

She didn’t mention Barack Obama by name, but her audience knew the comment’s target. It was intended as a rebuke to a man who was regarded as one of the greatest orators America had seen in decades, whose mesmerising orations were the glittering markers of the 2007-08 primaries.

His poetry helped win the nomination, the presidency, and then a second term in office. While Clinton has undoubtedly been correct about the importance of prose, it’s the fate of the poetry that has been troubling in our own federal election campaign.

It’s something of a cliche to bemoan the lack of inspiring contemporary political discourse. George Orwell’s 1946 essay Politics and The English Language, in its despair at “phrases tacked together like the sections of a prefabricated hen-house”, is still depressingly relevant today.

Neither Prime Minister Kevin Rudd nor Opposition Leader Tony Abbott, both educated and erudite, have established themselves as gifted rhetoricians, though each possesses a distinctive style.

Abbott, though articulate, has fashioned himself into a man almost devoid of rhetorical style, who speaks so haltingly he appears — like Poe’s protagonist in The Tell Tale Heart — almost too nervous to utter a full sentence lest something politically damaging escape.

Rudd has discarded his “detailed programmatic” admin-speak in favour of almost breathtakingly outdated phrases: “with your energy, we can start cooking with gas”.

As we slouch slowly towards election day, I spoke with former political speechwriters on the state of speechwriting in this election campaign.

“I am the word man,” James Button writes somewhat dispiritedly in his diary on the first week of his year as Kevin Rudd’s speechwriter, in his memoir Speechless.

Button worked in 2009 as a speechwriter for Rudd, and his father, former senior Labor minister John Button, has an oration held in his name. James had worked previously as a Europe correspondent for Fairfax and as deputy editor and opinion editor for The Age. But in late 2008 he received a phone call from the head of the Department of Prime Minister and Cabinet, an invitation to be the writer “to help simplify and lift” the Prime Minister’s prose.

When I meet Button for this story, we talk about the difficulties of life as the “word man,” in terms of access to the leader, and the ability to mimic Rudd’s voice. “There’s this weird relationship that people in political life have with language, they’re mostly not confident in themselves as writers, so they bring in outsiders to be the writers, and often they don’t trust the writer enough to let them right in,” he said.

Button speaks of the difficulties for speechwriters of this mistrust, of the ability to write authentically when those expected to create a speech aren’t given access to the decision-making process. He recounts an evening when he and colleague Tim Dixon were working on a particular economic speech and one of the advisors “handed us a bunch of documents and said ‘Off you go guys, weave your magic’,” he laughs.

“I think there’s no doubt that politicians are aware that language is dangerous. It creates hostages to fortune.”

“I used to describe it as like polishing the silverware as the meal is being carried to the table. You haven’t been in the kitchen, you’ve just been given the meal with the silverware on top, give it a bit of a polish before it goes out. And it’s just really hard to write in a way that’s authentic.”

I mention the “poetry v prose” line to Button and ask if he thinks politicians are afraid poetry will somehow trap them. “Poetry traps them,” he says, citing Rudd’s “the greatest moral challenge of our time” comment on climate change, and Obama’s “the seas will stop rising” — both infamous phrases that came to dog each leader. “There’s a danger if your words stick out too much, they’ll be remembered and possibly used against you.”

“I think there’s no doubt that politicians are aware that language is dangerous. It creates hostages to fortune. Whether they’re aware of that or not, you are accountable for everything you say, including an off-the-cuff thing said to a reporter, and things get misquoted.”

Button speaks of the way in which language becomes compromised by the furnace of political office. “They have to start spinning and pretending they did more than they did. They’re compromised by the nature of power and the things that haven’t worked. It just becomes that much harder to soar … it’s a business that disappoints. It has such high ideals and such a low element as well.

And yet, Button notes, the speech doesn’t appear to hold as significant a place in modern political campaigning. “If you go back 50 years, the campaign was speeches all around the country. But speeches really don’t figure anymore. Now it’s more the supermarket visit, the doorstop, the on-the-bus report. Abbott gave a speech to launch the campaign, Rudd will give a speech to launch Labor’s campaign. I can’t think off the top of my head of any other major speeches in the campaign. It’s like they’ve become secondary, third, fourth order issues.”

Discussing the way politicians deal with the changed media environment, Button highlights something conservative political strategist Mark Textor said recently: “in the future, the leader that will control the landscape will be the leader that will be able to slow the debate down”.

“I thought that was really interesting, because we are in a phase where politicians are still struggling to make sense of the 24/7 cycle, Rudd has worked it very assiduously, probably more than any politician has done, with the whole selfies and all of that stuff, but people will get tired of that in general and they’ll want to know, so we have this 24-hour exposure to the leader — what do we get out of that?”

I ask whether he thinks the picture is now the means though which politicians tell their thousand words — given Rudd’s notorious use of Instagram and selfies, and Abbott’s focus on images for the nightly news, appearing in hard hats and high-visibility vests. “I think it has been for some time. I studied at Columbia in New York, and a Washington senior journalist came to talk to us, she was a television journalist, and she had done a very tough series on the Reagan administration, and afterwards someone from Reagan’s office rang up and thanked her, and she said, ‘but you know it was pretty tough?’ And he said, ‘yeah, but the pictures were fantastic! We loved the footage.’ And that’s in the 1980s … We read the world differently now.”

We talk about the first leaders’ debate, which Button describes as “so frustrating to watch, I found them wooden and rehearsed.” Though we agree that those who decide the debates aren’t watching, how do you reach the disengaged voters? “It’s a really difficult thing to do when people no longer perceive that much is at stake for them in lives with politics. That their lives won’t change if Abbott gets in or Rudd.”“Great speeches come out of great truth. And what we have in this country now is this sort of hyper-partisanship, which is kind of fake because the parties aren’t that different on a whole lot of stuff. I’m not saying there aren’t significant differences, there are, but over the years they have converged much more.”

Part of the cynicism certainly is the belief that there isn’t much at stake. But it’s only possible to use soaring language when there are big issues being discussed. Button says: “I thought about this when I was a speechwriter, what’s the point of soaring language if the thing you’re doing is quite small? Your language should be small to reflect that. Don’t cry wolf when there’s no wolf. So my wish and ideal would be that you do the bigger things and then you find the language to reflect that, but if you’re not doing the bigger things, it’s inauthentic, and it won’t ring true anyway.”

I ask Button if he feels the language of a speech is important at all these days. That great speeches are more about the historical moment, the occasion, the agenda that’s being pursued, and the reason we’re seeing a hollowing-out of language is not because the speechwriters are any less talented, but that the parties are not fighting on those great issues.

“I always go back to what Peggy Noonan, Reagan’s speechwriter said about what a great speechwriter is — it’s not the rhetoric, ‘it’s the hard true recitation of the facts, and how we’re going to deal with the facts.'”

“You need the honesty to describe the problem correctly, and perhaps failures that led to it, including failures on your own side, and then you need the policy that is the right policy, that is a bold policy to address the big problem. If you don’t have those things, you won’t have a great speech.”

“Language follows reality, it can’t paper-over a makeshift policy or a timid policy. You might paper over it for a short time, but it will be found out very quickly, and you’ll be exposed more because your language was too soaring for a small thing, so you’re better off not having the rhetoric, because it will come back to haunt you later.”

“So the thing I think you’re asking is — is it something in the times we live in that militates against powerful language? Because it seems that the political solutions being provided are inadequate, and just timid, and so language will reflect that.”

“You know if we were invaded tomorrow — I’m sure we’d hear some great speeches [laughs]. You cannot hide in language, you cannot hide.”

Depressing as all get out.

Imagine a leader in the current age who didn’t come out and meet the press, or selfie, or tweet, every 5 minutes. Imagine a leader who only came out to speak when he had something to say.

I wonder if they would be trounced in this ridiculous world of ‘just get your face out there’, or would they ultimately come to be respected, maybe even loved.