iSentia index: where the hell is Kevin07?

It's all over, and the media has turned its attention to what the Labor Party will be like in opposition. One thing is for sure -- the Comeback Kid has not resurfaced. 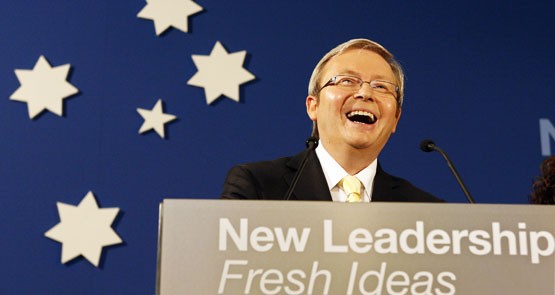 We bring you a remarkably static media coverage list, week on week, given that we go to the polls on Saturday, with Prime Minister Kevin Rudd and Opposition Leader Tony Abbott light years ahead of the pack for media mentions. It reflects the presidential and personal nature of one of the flattest federal election we’ve seen and is likely the last time K-Rudd will top this list.

It also reflects that since turning his messaging to defensive mode a couple of weeks ago we’ve seen little new policy offerings from the PM. We’ve certainly not seen the long-awaited Liberal Party policy costings, which account for so many mentions of Abbott and would-be-treasurer Joe Hockey this week. What we’ve seen instead is Abbott defending himself against the likes of Finance Minister Penny Wong on his foreign policy credentials, and sighting after sighting of his daughters, who have done much to help soften their father’s image as the electorate comes to terms with Abbott as likely next PM.

And with pretty much every pollster and therefore journalist in the country reporting the election is already over, we move into yet another bizarre phase of reporting about whether the ALP will block a repeal of the carbon price (Climate Change Minister Mark Butler assures us it will), forcing Abbott to a double dissolution election. (Abbott’s commitment to pursue such a strategy is probably to the dismay of most of his party room who’d prefer to settle into the government leather for more than nine months before having to do it all again.)

Thus, despite finally offering a bit of rousing oratory in the last few days of the campaign, K-Rudd has had to face down a barrage of questions about the fundamental proposition that he has little chance of victory; while his unstated response on climate change is that Rudd probably doesn’t care too much what stance a Labor opposition would take on carbon price. It doesn’t get much worse for a PM in an election campaign than that. One thing’s for sure, this ain’t 2007 Kevin. 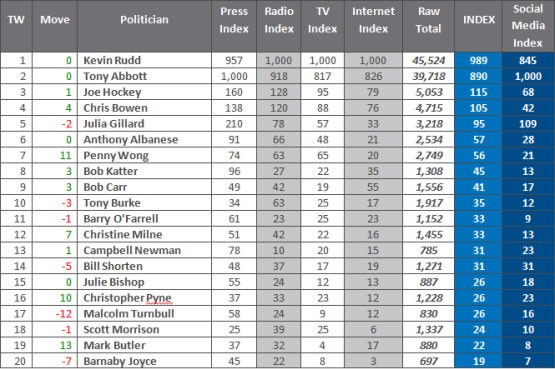 No surprise that perennial talkback favourite Abbott rules the airwaves this week. Interesting to see ousted PM Julia Gillard ahead of the Treasurer in the conversation.

The Twitterati mirror the airwaves with an Abbott, Rudd, Gillard one-two-three, reflecting that when push comes to shove the nation has probably made up its mind, no matter the medium.

President Barack Obama has won backing from key US political figures on his plans for a military strike on Syria with Congress expected to vote next week.