WHO WON THE DAY ON TUESDAY?

Bernard Keane, Crikey Canberra correspondent: Kevin Rudd‘s Q&A response on same-s-x marriage, which went viral, was the sort of moment Rudd needed to fill his campaign with, rather than producing it at the death. It was reminiscent of Gordon Brown, who produced an astonishingly impassioned performance in a town hall debate just days before the last UK election. With both leaders in Tasmania it was a rare spark of life in a final week that is grinding to a halt rather than rushing to a climax.

Richard Farmer, Crikey election analyst: Tony Abbott had both the hard hat and the fluoro vest for his television appearance of the day; Kevin Rudd just the vest. Somehow it seemed to symbolise the campaign for me. The Liberal going the whole hog and the Labor man just doing it by halves. The Abbott appearance with the workers fitted the message perfectly too. Getting rid of the carbon tax would help save manufacturing jobs like theirs. When you have a good thing going for you, stick with it. A Coalition win.

John Connolly, founder of John Connolly and Partners public relations firm: After a great ALP campaign launch where even Anthony Albanese looked like he had a personality it’s back to the boring grind. On the only poll that counts, the News Corporation most-read list, the “boot burglar” is a foot in front of “director having teenager’s son”, with “teen too fat to shop” a slim third. LNP by at least 21 seats. Winner: not us.

Nick Economou, lecturer in the School of Political and Social Inquiry, Monash University: Rudd losing his cool and caught up in a silly debate with clerics over gay marriage. Note to Rudd: it’s the economy … Another successful day for Abbott and the Coalition. A landslide is looming.

No significant change from yesterday, though Labor splashed some cash around seats in Sydney, Adelaide and in Queensland and Tasmania (see the full list online) …

No new announcements since yesterday.

Kevin Rudd: The Prime Minister started the day with a walk along Melbourne’s Yarra River, followed by a large contingent of supporters (and someone else’s dog). He’s spent the morning in the Melbourne, checking out National Broadband Network cabling in Clayton and the progress on the Ringwood Aquatic Centre in the ultra marginal seat of Deakin. The Rudd camp will fly to Adelaide before ending the day in Canberra, ahead of his National Press Club address tomorrow.

Tony Abbott: The Opposition Leader is spending the day in Sydney, starting by auctioning the season’s first tray of mangoes for charity at Flemington market. His welcome was significantly warmer than Rudd’s last week, with Nino Barbaro planting a big wet one on Abbott’s forehead. The Abbott bus then moved to the Botany Bay Industrial Estate where someone handed him a mozzie candle — perhaps the one Rudd forgot to pick up? Abbott will also appear on Big Brother tonight, where he tells the contestants to vote for the one “with the not bad looking daughters”.

Christine Milne: It’s another day in Canberra for the Greens leader, including her lunchtime speech at the National Press Club. Milne can also be found tonight making her pitch to the contestants of Channel 9’s reality show. Along with the other major leaders, Milne recorded a message especially for members of the BB house who will get their own polling station on Saturday.

Over at Gene Ethics, they decided to ask the major parties (and some minor ones too) what their policies on GM foods are. You can find the parties’ replies and questionnaire results here, but scroll to the end to find this colourful message from the Liberal Democratic Party:

Here at Crikey, we’re missing the Liberal candidate for Greenway Jaymes Diaz. Looks like we’re not the only ones… 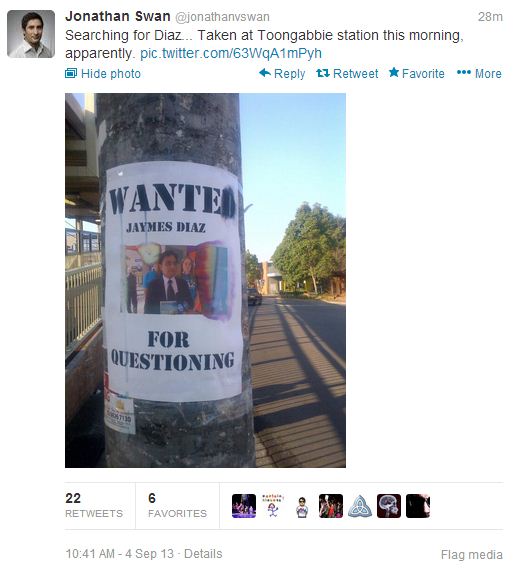 [Abbott will also appear on Big Brother tonight, where he tells the contestants to vote for the one “with the not bad looking daughters”.]

Stop the world I want to get off now.