Pork barrelling writ large. Here's our Crikey guide to where the major parties have promised to spend money -- and Queensland is the hands-down winner, while SA gets next to nothing.

Queensland is certainly basking in the sun of election-time largesse — the two major parties have pledged a whopping $19 billion between them for the state in campaign promises. Meanwhile, South Australia got just $16.3 million in spending promises. And no, that’s not a typo — that’s million, not billion.

Is the election campaign about providing a helping hand to areas which deserve greater funding — or is it pork barrelling? Crikey has used our online Cash Tracker, which keeps track of every promise made by the major parties, to map out where the major parties want to spend your money.

We’ve found all roads lead to Queensland this election, in large part due to promises to fund highway upgrades (funnily enough, there are plenty of must-win seats there too). New South Wales is doing very well by the Liberals (there’s quite a few seats up for grabs in western Sydney, by the way), and the Coalition has also pledged a significant amount of money to Victoria, Western Australia and Tasmania (the Coalition could pick up three or four seats in Tassie).

Labor is being a little more sparing with its state-based promises, with a few bob for NSW, a bit for Victoria and a little taste of sugar for SA (less than what the ALP has promised for Tasmania, mind you).

So what did the poor old Northern Territory do wrong? It has  largely missed out on promises from both sides.

Here’s our Crikey map, showing promises made by the major parties of more than $1 million, which relate to a particular state or geographic area (we’ve left out general nation-wide policies). It’s current as of this morning:

And here’s the same information shown in interactive form. We’ve dropped a pin for every promise so you can drill down into the detail. Click on the image below; when you’ve done that, use your mouse’s scroll wheel or the on-screen controls to zoom in on the map, and click the pins to see the details of the promises made for that location … 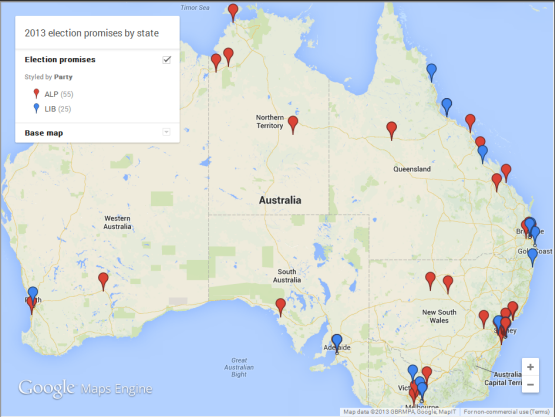 Surprising that The Greens, the first party to have their policies costed by the Parliamentary Budget Office, aren’t included in this interactive map.

In spite of what Sophie Benjamin says in her article, I think there is a whopping error with regard to South Australia. When I went to the interactive map it stated that the Libs have promised $500 million rather than $500k on the map above. One of these amounts must be wrong and my reading of what Abbott announced is that it is indeed $500m. That still leaves SA being pretty much ignored when it comes to buckets of money. Par for the course. No wonder Nick Xenothon and the Greens are so popular here.

There’s $7.5 million missing in SA for the Campbelltown Leisure Centre supported by the Libs and Christopher Pyne and Tony Abbott in particular and also by the Greens.

there has always been a lack of foresight by federal government in relation to SA. On a recent visit, in my view, SA is starting to move along nicely, with very little federal assistance, and is probably close to my favorite capital city. With the largest Uranium deposits in Australia, a burgeoning resource industry and potentially, the biggest oil deposit in Australia, a little bit of foresight wouldn’t go astray!