Sydney stringer needed. Tips’ ears perked up at this delightful election sighting from a reader:

“I was driving north between Mosman and Seaforth (in Tony Abbott’s electorate in Sydney) at the beginning of peak hour, and just before the spit bridge there was this guy playing a drum kit on the middle of the footpath next to the traffic lights! Which was odd in itself, but behind him there was a sign saying ‘Vote 1 Rise Up Australia Party’. I couldn’t take a photo because I was driving. I thought Rise Up Australia was a conservative racist party, and conservative racists tend to object to young people playing loud music (he looked to be 20-something). He was doing a basic rock beat as I drove past.”

Crikey urgently needs readers to go out and take a photograph of this fellow. Better still, record some audio! Email us here.

Irresistible candidate. Another Crikey stringer snapped this election poster in the quirky NSW township of Collector, near Canberra. 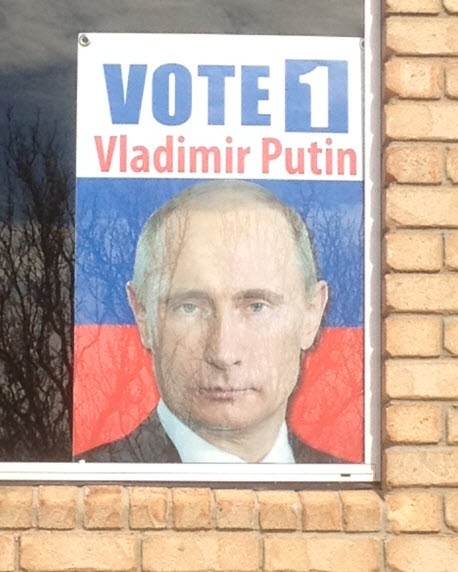 You’ve been Clived. We’re hearing reports of people being spammed by Clive Palmer — and maybe it’s working. Today’s Age reports the PUP is polling 8% in Queensland, putting it in contention for a Senate spot. Here are some of the claims:

“I have been inundated with spam from the PUP for the last week. Two to three emails per day, all to my work email account. Interestingly, the generic account I monitor for work is getting the same spam. So, is Clive Palmer phishing all the .edu.au email addresses?”

Another person wrote on Facebook that the PUP was spamming work email and suggested the PUP’s IT folk had worked out the workplace’s email username convention and were scouring Facebook for people who listed their employers.

Have you been spammed by Palmer? Let us know (and tell us what kind of email address was spammed). Is this against the Electoral Act?

Thomson goes for the jugular. Nice to know, Craig, nice to know … but will this be enough to win the seat?

Childcare name still in the business. Following up on a tip from the public we can confirm that yes, Le Neve Groves, the co-founder of defunct childcare chain ABC Learning, is still working in the industry. She’s at a Brisbane childcare centre. Groves, the ex-wife of Eddy Groves, has been in court this year over the sale of $33 million of her shares in 2008; she has alleged her signature was forged on the guarantees for the loans and sued the lenders to recover the money. It appears those involved in the case are waiting on the judge’s decision.

Cuts to the ‘Tiser? Looks like there could be redundos at the Adelaide daily’s print site …

“Adelaide Advertiser cutting their afternoon shift and asking for 23 voluntary redundancies next year. Layoffs if redundancies not taken. Package may be four weeks pay for every year of service up to maximum of 25 years.

A News Corp spokesman said: “As part of our ongoing transformation, we are currently consulting with staff and unions about potential changes at our Adelaide print site. No decisions have been made yet.”

Incidentally, we continue to hear rumours from Fairfax (and ex-Fairfax staff) that the relatively generous redundo packages offered of late will be pared back at some point, giving worn-out journos food for thought about departures …

Carbone on leave. Age gossip queen Suzanne Carbone hasn’t written for a few months; a tipster wondered if she had left. We called her, she’s currently on leave. The horse racing season is all but upon us, so we’d expect some trackside gossip soon …

Palmer spammed me too, several times. I’m on Gmail