The media has given up on pretending this election campaign is actually a contest and is now focusing on what Tony Abbott will do when he is prime minister.

Campaign reading. Journalists have moved on from writing about who will win to consider how Opposition Leader Tony Abbott will actually be able to govern. Laura Tingle gives her version of “Abbott may be forced to reap what he’s sown“, behind the paywall in the Financial Review:

“After Tony Abbott’s hard line in opposition, the prospect of Labor taking an equally no-holds-barred approach to respect for mandates is pretty strong.”

Back in the days when rugby league players worked for a living before going off to training, Glenn Lazarus was a used car salesman in the national capital. Come July next year he might return as the senator who prevents the Laura Tingle horror scenario for Abbott from coming about. 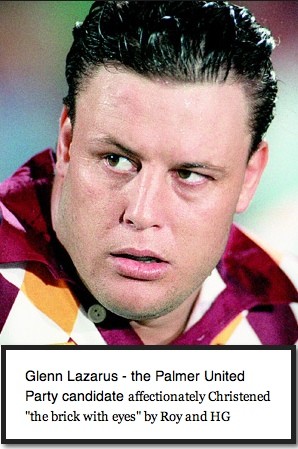 That at least is one interpretation of the latest Nielsen poll of voting intentions in Queensland by Tingle’s Fin teammate Phillip Coorey as he asks “Could Clive Palmer really be a force in the Senate?”

“Former rugby league player Glenn Lazarus has an outside chance of winning a Queensland Senate seat for Clive Palmer’s new party, and Labor is clinging to its eight seats in the Sunshine state and will struggle to pick up more.

“If the former Brisbane Broncos prop is elected, Opposition Leader Tony Abbott will be a step closer to being able to abolish the carbon tax without relying on the agreement of Labor or the Greens.”

The country’s deep problems, such as a budget stuck in deficit, will not change just because the government changes on Saturday, says The Age’s Tim Colebatch. “Labor’s problems will soon be Abbott’s woes“, he cautions, saying the difficulties the Opposition Leader has exploited against Labor will become his to manage:

“One reason Labor had so much trouble governing is that the problems are so tough, and it did not control the Parliament.

“From Monday, these will be Tony Abbott’s problems. Wish him luck.”

The 1991 defeat of John Hewson’s Liberals after they told the Australian people in a 650-page manifesto exactly how they planned to govern has influenced our political parties ever since, explains Peter Hartcher in “Fearful leaders can’t see voters seek truth“. According to this analysis, the evasions of the politicians are all our own fault.

“We had shown the political parties, as clearly as possible, that we were not interested in the truth. ‘Don’t tell us your real plans. We prefer political fairy tales. Tell us that story again, the one where we get lots of goodies at no cost.’

“This is precisely what Tony Abbott and Kevin Rudd are telling us today. Fairy tales.”

“Goodies, baddies and the ugly ALP” — Defence correspondent Ian McPhedran in the Sydney Daily Telegraph believes if there were a moment in this election campaign when Prime Minister Kevin Rudd, Labor Senator Penny Wong and Labor’s brains trust proved how far out of touch they had become, it was their ludicrous over-reaction to Abbott’s “baddies versus baddies” Syria comment.

“PM’S interests too vested for comfort” — Jacqueline Maley on the trail with the fluoro vest-wearing PM for the SMH finds a man who, despite the message of the polls, for the moment at least is still “the Man” with young Australians.

Other views: blogs and tweets of note. Peter Brent at his Mumble blog this morning looks at the latest examples of differences in the findings of statewide polls and those taken in individual electorates. He points out that both categories of polls can’t be right without being able to explain which. As he concludes: we’ll know more on election night.

“Rudd v Abbott: Who’s winning the Facebook votes?” The Canberra Times examines the question and finds with less than a week before Australians go to the polls, new social media data shows Abbott might be winning in the key digital battleground of Facebook.

And coming in at number 10 last night on the news.com.au list of most read stories was the important political news: “There’s no flies on Kev… oh, wait“. Yes, a fly landed on the Prime Minister’s head during a press conference.

Campaign listening: 1233 ABC Newcastle. A civilised debate this morning between the sitting Labor member for Shortland Jill Hall and the Liberal candidate John Church on paid parental leave schemes. Two articulate representatives of their parties’ view that justified the compere’s comment that they both gave a good account of themselves and that the Hunter was blessed with quality candidates.

When it came to news, the interesting revelation was that Labor plans for a Singleton boat people centre will not go ahead. From AM came the interesting snippet from Kevin the newsagent at Donald that people stop buying the capital city papers a bit during election campaigns.

The nightly television news. Abbott as the military man and Rudd the hairdresser. Plenty of variation in the television pictures but no new themes.

The daily election indicator and other measures. Labor 4.7%, Coalition 95.3%

The bites readers who have entered our pick the winners survey are on balance expecting a Coalition victory on Saturday but seem slightly less pessimistic about Labor’s chances than the opinion polls would indicate. The expectation is for the Coalition to win 80 seats, Labor 67, Greens 1 and others 2. To submit your prediction  Enter HERE. 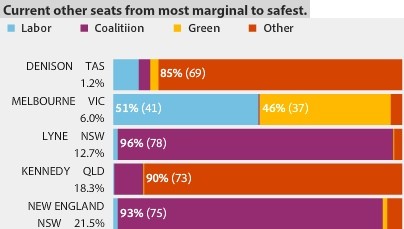 Richard – Re: the article by Tim Colebatch which you mention: I have no sympathy for Abbott in relation to the state of the current federal budget. If you want to know why, read Alan Austin’s article in the Independent Australia newspaper, ‘We really must talk about the Howard and Costello economic disaster’.
The previous Coalition government, in which Abbott was a senior minister, caused the current mess, so it is only fitting that he (Abbott) should clean it up! Why is it that not even in Crikey do we hear the FACTS this comment piece contains?
There are a lot of misguided LNP drones parroting a lot of nonsense it seems, particularly in the MSM!!

Could the coalition numbers be broken into National and Liberal, after all Mr Abbott has refused to do deals with minor parties to firm a government. We need to know the Liberal numbers.

Then there’s Katter and Tony Crook (a “WA Gnat”)?

AR -Quite right. I just cut and pasted from the SMH without thinking.
Thank you.