Markets rally across the world in response to improving conditions in China and the UK. 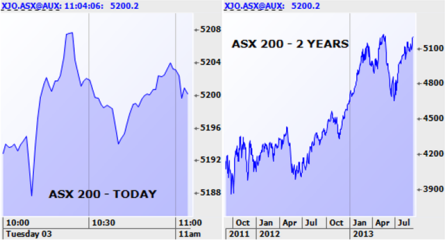 The market is up 13 points. ASX 200 Futures were up 24 this morning following a 53 point rise in the ASX 200. The lift is coming on the back of better than expected Chinese numbers over the last couple of days suggesting China is “on the mend”. There may also be an element of an “election rally” coming early as the polls suggest a decisive Coalition win.

European markets saw strong gains on better than expected PMI numbers in the region which suggest Europe is coming out of recession. UK up 1.45%, Germany up 1.74%, France up 1.84%. Biggest rise in European markets in two months.

UK market up on a 3.37% rise in Vodafone after they sold $130 billion of Verizon stock and will return money to shareholders.

The Dow Jones closed for the Labor Day holiday.