Labor, Liberals, the Greens and the Sex Party have all been caught out by new rules on how-to-vote cards, with all parties incorrectly formatting some of their cards. It could be a costly mistake.

Australia’s major political parties are facing millions of dollars in fines after distributing how-to-vote cards that fail to meet the requirements of the Electoral Act.

Under section 328B of the act, parties are required to include authorisation details on each printed face of their HTVs at either the top or bottom of the card. They are also required to include the name and address of the person who authorised the card and the name of the registered political party.

However, Crikey can reveal that the Liberals, Greens, the Labor Party and the S-x Party have all fallen foul of the law after illegal cards were distributed at hundreds of pre-poll voting centres across the country. HTVs examined by Crikey show that all have failed to comply with at least one element of the legislation in multiple instances.

Each breach attracts a fine of 50 penalty units or $8500. The major parties have printed unique how-to-vote cards in all 150 lower house seats and additional Senate cards in each state and territory, meaning fines could skyrocket to over $1.3 million per party.

For example, the HTV of the Liberal candidate for Throsby, Larissa Mallinson, contains an authorisation on the front from NSW Liberal Party state director Mark Neeham. But Neeham’s political party is not included. There is no authorisation on its other face.

In Bendigo, Liberal candidate Greg Bickley has a correct authorisation on the front, but nothing on the back.

The Australian S-x Party’s statewide HTV is authorised by Robert Swan on both sides, but Swan’s party is not listed.

Labor’s statewide Victorian HTV, picked up by Crikey from the Queen Street pre-poll station in Melbourne late yesterday, is correctly authorised on both sides, but on the front of the card, the authorisation is on the side, not the top or bottom.

Crikey understands Greens volunteers are hastily affixing thousands of stickers to the HTVs to make them compliant. Things got so dire for Liberal campaign workers in Bendigo on Friday that the party was having to urgently photocopy their HTVs to make them single-sided. And both Liberal and Labor have been warned by the Australian Electoral Commission over the breaches.

The changes to authorisation requirements were legislated prior to the 2010 election under the Electoral and Referendum Amendment (How-to-Vote Cards and Other Measures) Act 2010 in response to concerns voters were not being told who was really behind multiple feeder tickets designed to bolster the vote totals of other parties.

According to the AEC, the intention of the amendments was “to clarify who will benefit from the preference flow suggested on the how-to-vote card, to reduce the potential for voters to be misled and to give voters the means to make informed decisions by ensuring that the political source of how-to-vote material is clearly stated”.

AEC spokesperson Phil Diak confirmed that “the AEC has ongoing contact with the political parties including reminding them of the requirements for how to vote cards under Commonwealth Electoral Act provisions. This includes if an HTV card is brought to the AEC’s attention that is in breach and requires withdrawal or remedy.”

Greens national campaign director Chris Harris told Crikey that there had been “a high level of confusion and that a number of parties had been misled”. He said the party had been previously relying on an out-of-date handbook provided by the AEC. However, Diak informed Crikey that the “handbook” is actually updated online, with the last change made in July. Harris said he was confident that the material distributed on Saturday would be “legal under the act”.

“The AEC advised both the Liberal and Labor Parties that they considered some of their HTV cards were in technical breach of new electoral rules that have commenced to apply at this election … we always have two runs of cards — a small run for early pre-poll and a much larger runs. We note that an ALP card for the Attorney-General’s electorate has no authorisation on the front of the card at all.”

Meanwhile, Labor has been taking extra precautions, producing a hoodie for select campaign staff containing the slogan “If in doubt, authorise!” with its own authorisation from ALP national secretary George Wright below. But is it also in breach of the rules? The ALP is referenced on the back; we’re not sure what’s on the front … 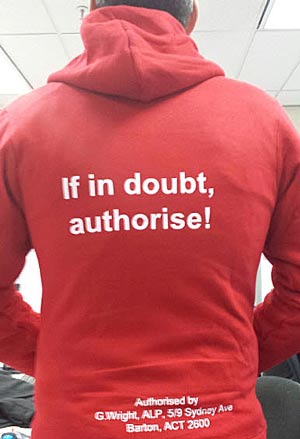 A slap on the collective wrists is what I predict they’re gonna get.