Phone hacking has cost News Corp hundreds of millions of dollars so far.

Free speech free TV style. The Nine Network had dumped a GetUp ad criticising News Corporation’s anti-Labor campaign despite it being approved for broadcast by Free TV Australia’s Commercial Advice Unit and broadcast over the weekend. Seven and Ten have both refused outright to run the ad, which is a direct-to-camera address by a male about The Daily Telegraph and The Courier-Mail‘s propaganda campaign directed against Labor during the course of the election. Despite accepting GetUp’s payments, Nine withdrew the ad from broadcast yesterday. The Seven and Ten networks refused last week to run the ads.

This isn’t the first time GetUp’s ads have been rejected despite passing the free-to-air industry’s own ad vetting processes. Last year the networks refused to air an ad about Coles and Woolworth’s links to gambling. This is despite the networks’ insistence they are stout defenders of free speech. “Freedom of speech is one of the fundamental pillars of a free and open society. It is as important as parliamentary democracy and the rule of law in guaranteeing the freedom and rights of all Australians,” said David Leckie in his role as head of Free TV Australia in 2007. — Bernard Keane

Bully lives up to its name. Stellar work from The Gold Coast Bulletin on its front page today as it turns a fly-on-the-wall Palmer Unity Party campaign yarn into one of the biggest beat-ups since Kevin Rudd’s non-hairdryer blow-up in Afghanistan. The story, by intrepid Bulletin reporter Matthew Killoran, reports that party leader Clive was annoyed his cab was going to arrive at the same time as banners in another cab to be set up for a press conference. “Wait, wait, wait here. Just stop here,” Palmer apparently “shouted”. “Wait. Just stop. Don’t go off.” 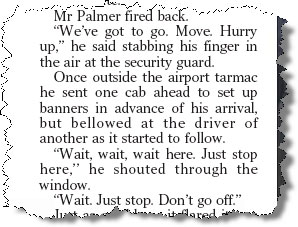 And that’s it. Stop the presses! — Andrew Crook

Malcolm on the end? Liberal Party ads currently running on Fairfax news sites seem to be missing someone: Malcolm Turnbull has been covered up by the Liberal Party logo. He never really looked like one of the gang in the original, but now he’s gone missing entirely. Is this retaliation for Turnbull not putting the Liberal Party logo anywhere on his own campaign material and running for the “M Party”?

Mounting cost of phone-hacking at News. Rupert Murdoch’s 21st Century Fox can’t seem to shake the lingering tendrils of the News of The World phone-hacking scandal. It has already cost the empire hundreds of millions of dollars in lost revenues, legal costs, asset impairments and other charges. Now it’s going to cost a further $US110 million, at least in the next year. On top of that the share buyback scheme that was restarted in the wake of the scandal and has cost more than $US7.2 billion so far has been bolstered by another buyback scheme, this one to cost $US4 billion.

21st Century Fox is still buying shares in itself, which helps support the share price (and allowed News to pay top dollar for those performance shares that vested to senior executives such as Rupert and James Murdoch last month).  The company last month announced a $US4 billion buyback, which will link with the existing $US10 billion buyback. Under the latter, News had spent $US7.211 billion to buy back more than 358 million non-voting shares up to last Friday. The company suspended the buyback originally started in 2005, then reintroduced it after phone hacking hit the fan in mid-2011. The new buyback is intended to bolster the existing scheme.

And, not contained in the August profit report was news the company has put aside more money for legal and other costs in the phone-hacking and other inquiries in London. 21st Century Fox has increased by $US110 million the amount it is budgeting to cover additional legal costs tied to News Corp’s UK newspapers (The Sun and the defunct NotW). As part of the split of the old News Corp, 21st Century Fox undertook to cover future legal costs in London.

In May, News put the amount for future claims in London at $US60 million and in early August said it had recognised around $US40 million of such costs. The new amount was not explained. On March 31 News Corp said it had incurred $US389 million in costs linked to the London investments (there are three police inquiries and charges and court appearances have already started). That means half a billion dollars has been the direct cost of the scandals so far, with up to $US1 billion in other costs associated with the closure of the NotW, the loss of advertising and newspaper circulation revenues since July 2011, plus impairment charges taken in 2011-12.

On top of this, there’s the yet-to-be-announced fine and other costs associated with the US government’s investigation of the Murdoch empire for claimed breaches of America’s tough Foreign Corrupt Practices Act. And further details from the proxy statement reveal that Lachlan Murdoch was paid $US240,000 for his work on the boards of News Corp/21st Century Fox. Sister Elisabeth was paid $286,245 in salary for her service from July 2012 to September 2012. And for Rupert Murdoch there was another nice little earner disclosed in the fine print: around $US875,000. — Glenn Dyer

Oh, Canada: papers cut by ads. Papers across the developed world are under pressure. But there’s one country where the future seems especially grim — Canada — where two major paper groups cancelled the holiday Monday editions overnight (Labor Day) due to the collapse in advertising.

Toronto Globe and Mail (Canada’s biggest paper by readership) publisher Philip Crawley said the decision was due to a shortage of ad revenues to cover the cost of creating, formatting, printing and delivering the paper for a holiday Monday, plus “vacation stops” by subscribers for the day. To try and offset the impact of plunging ad revenues the paper erected a paywall late last year and has reported a 40% drop in visits to its website (which was started back in 1995). And Post Media, the largest publisher of English-language papers in Canada, didn’t publish editions in Calgary, Edmonton and Ottawa. Post Media owns the National Post, which stopped Labor Day Monday editions back in 2008 in the depths of the GFC. The company hasn’t published Labor Day editions on other holidays for some of its papers in the last couple of years because of weak ad revenues and sales.

A nation in trauma, the PM takes a break. Sound familiar?

How to make an incumbent PM call an early poll: first, live in vaccine-happy Canada

You wouldn’t want to offend Rupert would you? Look what he does back – with his Limited Interest?

It seems that freedom of the Press only applies if you own the medium.

And did Andrew Bolt complain or act to defend free speech?

Not running the ad does more damage to the TV companies than it would have to Rupert or the Libs had they agreed. Next time Big TV play the free speech card all their critics need do is remind them of this.