How Australia should use the UN to lead on Syria

With the US poised to launch military action against Syria, can Australia's UN Security Council presidency make a difference? Retired diplomat Bruce Haigh assesses the options. 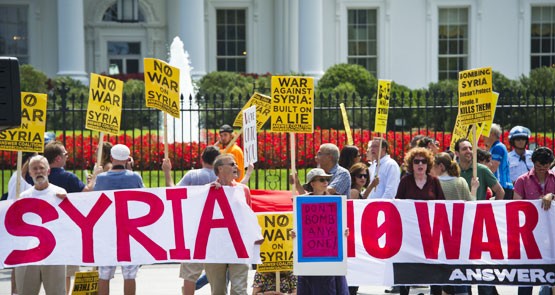 The United States is determined to carry out a punitive attack against Syrian President Bashar al-Assad’s regime for its alleged use of nerve gas against civilians. Should Australia, since Monday the president of the UN Security Council, support military intervention?

US President Barack Obama has approached Prime Minister Kevin Rudd to ask that very question. Rudd has not taken the Australian people into his confidence, but apparently he has made all the right noises to Obama. The Australian Department of Foreign Affairs has reportedly not been briefed on specifically what those noises were, and the professionals are less than pleased.

Australia is lucky to have Gary Quinlan as Australian ambassador and permanent representative to the UN; he is the new president of the UNSC. Quinlan, an experienced and intelligent diplomat, is unlikely to blanch at accepting the challenge of responsibilities thrust on him by the difficult situation in Syria, a US administration giving short shrift to the UN, and a change of government in Australia.

This is a unique opportunity for Australia to demonstrate some creative leadership of the UNSC. It is open to the new president to refer the issue of Syrian transgressions to the UN General Assembly, which would allow for free and open debate. Thus far there has been no mention from the US of seeking to work through the UN for a possible solution. Critics of the UN and those favouring a direct US attack are quick to cite the ineffectiveness of the UN, but undermining and bypassing the organisation creates self-fulfilling outcomes.

The power of dialogue, networking, influential connections and on-the-ground information-gathering has been subsumed by a belief that outcomes favouring the US can best be achieved by electronic surveillance and the use of force.

“Obama’s ‘solution’ is bereft of imagination and subtlety. It is a frustrated, angry response from a tired and diminished superpower …”

Opposition Leader Tony Abbott, likely to be prime minister after Saturday’s election, said on the ABC’s Insiders on Sunday and again on 7.30 last night that he did not favour an armed response along the lines being mooted by the US administration. After Saturday he might seek to give Quinlan the brief he needs to demonstrate Australian leadership and diplomatic mettle. Such leadership might help get America out of the bind it has created for itself and force a measure of respect for Australia hitherto lacking in the bilateral relationship.

Australia should not feel compelled to support the Obama administration’s planned intervention, which many of America’s close allies have refused. The British Parliament voted against support for such a course of action, and Obama could struggle to secure approval from his own Congress. French President Francois Hollande is seeking armed intervention but says France will not act alone.

Obama’s moral authority against a leader who has allegedly used sarin gas is diminished when set against his administration’s use of drones over the past six years in Pakistan, Afghanistan and Yemen, which have killed as many if not more civilians, including women and children, than the Syrian nerve gas attack.

Obama’s “solution” is bereft of imagination and subtlety. It is a frustrated, angry response from a tired and diminished superpower, intent on demonstrating that it still has the strength to determine international outcomes. On past performance a US attack on Syria, however much is claimed for weapons capable of delivering payloads with surgical precision, is likely to kill civilians.

If a punitive attack, which has been referred to as a shot across the bows, fails to deter the Assad regime from further nerve gas attacks on Syrian civilians, does the US then up the use of force and if so by how much? This is poor strategy, one fraught with danger and one which the lessons of Iraq and Afghanistan appear already lost or not taken on board. It also carries the possibility of conflict spreading in the Middle East, with Israel looking for an excuse to attack Syrian ally Iran.

There is no doubt that the cruel attack on innocent civilians by the Assad regime deserves the strongest condemnation and sanction. As a course of action before the use of force was contemplated, the matter should have been brought before the UN General Assembly. The revulsion over this attack by the international community could then be demonstrated to the Syrian regime and its backers, Russia and Iran, by what would likely be the vast majority of delegates. This would provide leverage for further combined UN action.

Obama has criticised what he terms the “incapacity” of the UN Security Council over Syria. However, part of that incapacity is due to Obama’s desire to act unilaterally. The US has little respect for the UN and its agencies. Australia has the opportunity to put the question through the proper channels.

WE have just been labelled cruel, inhuman, degrading and lawless and we are trafficking Syrian refugees to Nauru and Manus Island.

Why the hell would anyone listen to us.

“There is no doubt that the cruel attack on innocent civilians by the Assad regime deserves the strongest condemnation and sanction.” It’s ballsy making such a statement when it hasn’t been irrefutably proven to be the case. But it seems to be the current trend within most media outlets. I am disappointed that a Crikey writer, especially a former Australian diplomat has succumbed to the hype.

You must also remember that the US wasn’t the first to call the hounds of war on this one. Nor were they second. France and the UK take those honours. Turkey a very close third. What really brought the US into this mess is Obama’s “red line” statement in 2012, and the UK, French and Turkish hawkers used that to their advantage incredibly well. This did not start out as a US proposal and although I am no fan of Obama or his administration to be fair, and as we have seen – at any time the US enters a coalition, it becomes the leader of that coalition.

And although you accurately state that Russia and Iran are Assad’s major backers, they would also like to see the US bogged down in another protracted, hugely costly war. They have been enjoying it for the past decade plus. So the Russian/Iranian issue then becomes a moot point (theoretically – it still won’t stop them thumping their chests in opposition).

Until it is absolutely proven that the Assad Government used chemical weapons against it’s people a couple of weeks ago, I think our position on the UNSC should remain resilient against any type of military intervention.

But then the real question that begs to be asked is “why now?”. Why now after decades of the same family slaughtering his own people does any Western Coalition want to act? I ask you.

It’s disappointing that that any rational informed person would believe anything the US says about geopolitics in the Middle East.

There has been no evidence provided to date.

Well said Dan and Kevin. The conflict has the potential to escalate into WWIII.