Tony Abbott is right to cap his worthless Direct Action plan on carbon emissions. If only he'd go further and dump it altogether, writes our man in Canberra. 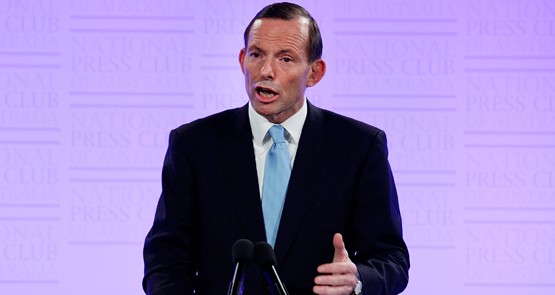 Opposition Leader Tony Abbott has made the right call in declaring yesterday that his Direct Action policy will be capped at $3.2 billion regardless of whether it enables Australia to meet the hitherto-bipartisan target of a 5% reduction in CO2-equivalent emissions by 2020.

Direct Action is the policy settled on by Abbott in early 2010, crafted by his “climate action” spokesman Greg Hunt, as a cover for his abandonment of John Howard/Brendan Nelson/Malcolm Turnbull’s commitment to an emissions trading scheme. It has the unusual distinction of being the one policy position Abbott hadn’t adopted or advocated on climate change in preceding years — before that, Abbott had variously rejected and accepted anthropogenic climate change and advocated a carbon tax as well as backing Kevin Rudd’s Carbon Pollution Reduction Scheme. Direct Action won’t meet that 5% target — it won’t come close, not by the normal maths used by most of us, and certainly not according to any independent analysts who have vetted the policy. Indeed, Direct Action will make a negligible impact on reducing emissions.

How do we know? Because it’s been tried before. Direct Action is the same approach adopted by the Howard government on greenhouse emissions — and adopted for the same reasons, as a figleaf for climate denialism. The Howard government, which rejected climate science for nearly all of its existence until forced politically to acknowledge it, ran a series of subsidy and grant programs to encourage renewables or energy efficiency, in which Canberra bureaucrats picked carbon winners and handed out money. Both the Australian National Audit Office and the Productivity Commission costed the abatement purchased under such programs at a cost running into the hundreds of dollars per tonne.

Direct Action is costed on the basis that a similar program could deliver abatement at $11-$12 a tonne, based on buying the bulk of its abatement at $8-$10 a tonne through soil carbon, in which carbon is sequestered in soil by farmers and, allegedly, remains there permanently. That costing is nonsensical, as was pointed out to Hunt directly when he tried to use a Victorian farmer with a keen interest in soil carbon as a publicity prop and was told by the farmer his scheme was underfunded.

All this is exactly as opposition frontbencher Malcolm Turnbull warned in 2010, when he said the policy was a climate denialists’ policy that could be abandoned quickly and that, if seriously implemented, would pose a significant threat to the budget.

“That’s why Abbott is not merely right to put a cap on the program, he could go one better and dump it entirely.”

At an abatement price many multiples of that costed, the $3.2 billion budget for Direct Action won’t make much of a dent on emissions — the Australia Institute suggested it would yield about 18% of the needed abatement, based on Australian National Audit Office figures, meaning Australia’s emissions would rise under Direct Action, rather than fall. Moreover, Direct Action will likely fund energy efficiency projects that companies would have proceeded with anyway due to their overall cost-effectiveness.

Abbott’s commitment that not a single additional cent will be spent on emissions abatement is thus a clear abandonment of the 5% reduction target.

It is, however, the correct call in fiscal terms: Direct Action will be a grossly inefficient use of taxpayer funds. To meet the 5% target will require a five-fold increase in the program’s budget — and bear in mind that, assuming bureaucrats are doing their jobs correctly and awarding grants to the most efficient projects first, the more money available to a program, the poorer the average quality of the recipient projects. That means the average cost of abatement will rise with every increase in program funding.

But surely some abatement is better than no abatement? Especially if an Abbott government has removed a carbon price and, as seems likely despite Hunt’s denials, watered down the Renewable Energy Target? In fact, in the absence of systemic incentives to improve energy efficiency or shift to to renewable energy sources, a grants program like Direct Action simply becomes more business welfare, as handouts to farmers and companies to do what they would have done anyway, subsidies for absurdly inefficient projects or rewards to political mates.

One of the most expensive forms of abatement, ethanol fuel subsidies, which generated abatement at a cost of several hundred dollars a tonne, was the basis for one the worst scandals of the Howard government, when it bent over backwards to look after the interests of Manildra’s Dick Honan, with then-prime minister John Howard lying to Parliament about it.

That’s why Abbott is not merely right to put a cap on the program, he could go one better and dump it entirely. It’s always been clear he doesn’t believe in climate change, or more likely simply doesn’t see it as a significant issue. The most intellectually honest and fiscally defensible position Abbott could adopt is to demonstrate that Turnbull was right, and dump it.

But dont worry all you mums. 22 Billion dollars will make sure you get designer booties for your bub before it grows up in a desolate waste land burnt to a crisp.

Amazing. Even when Abbott’s wrong he’s now right. Even when he sets up the expectation to break a promise before he’s even elected, he’s right.
Has crikey just become another unquestioning cheerleader like the MSM now? Is it that important for crikey to be seen backing a winner like the donkeys out there?
Are the polls so in charge of the outcome now that we shouldn’t even bother having an election? Why? Let’s save the money.
It’s clearly all over – Abbott’s already PM – let’s all go home

Abbott has just set up the perfect carbon wedge.

But once the tax is repealed and Abbott introduces Direct Action legislation, he can also rely on Labor and the Greens to block it, because it is not a price on carbon emissions.

Why would he ever think about going to a double dissolution election when he has just achieved his best ‘denier’ carbon emission outcome – no action at all, for which he can blame Labor!

Honestly, we’d be better off resurrecting Margaret Thatcher to run the country than leaving it to Abbott. Yes she was evil and heartless, but she would have supported a market mechanism for mitigation, and she would have recognised that the phrase “a 4 degree future is incompatible with an organised global community” is worth paying attention to.

Watch closely the policy announcements during the next few days. Positioning themselves for the costing figures release. A nip here and a tuck there. Abbott is starting to use political capital that he thinks he is entitled to before the election. Turn the lights on Australia and take close notice. These are the most critical days and hours ahead.

It will be interesting to see how much of the facts and promises will be broadcast to the public through the regular media. My guess is the infomercial crap will continue with no substance.