Bernard Keane, Crikey Canberra correspondent: Perhaps, as one social media wag pointed out, the ALP should have launched its campaign with its campaign launch, instead of waiting until the last week. Kevin Rudd‘s picked up some vigour and momentum since Sunday, and gave a good performance on the ABC’s bizarre chat show Q and A last night. Could he pull it back to merely a respectable loss? Meanwhile Tony Abbott on 7.30 last night continued to demonstrate he’ll be on a steep learning curve on foreign policy.

Richard Farmer, Crikey election analyst: I am marvelling at the control Rudd continues to show whenever a television camera is near. It cannot be easy to keep smiling along when the news you keep hearing is so bad. Reason enough to give the man playing the nerdy Aussie battler the points. A Labor win.

Ian Smith, partner of Bespoke Approach advisory firm and former Liberal Party advisor: Another day, another loss for the PM and a win for Abbott. The ALP is now losing everything — including the respect of the Australian people according to every opinion poll out there. Remember how Rudd said he would be positive? Well, he spent the day trying to ridicule Abbott’s interpretation of the Syrian conflict; hardly an issue in the marginal seats. The Labor Party has been led by some great figures, but not now. Rudd is a desperate man looking for any lifeboat in a sea of self-delusion.

Nick Reece, adviser to former PM Julia Gillard and public policy fellow, University of Melbourne: A points win to Rudd, a result which Abbott would not be unhappy with given his lead in the polls. The Opposition Leader would be relieved to have gotten through the Press Club and Leigh Sales interview on 7:30 relatively unharmed, although his maneuvering around climate policy may create campaign difficulties and long-term policy problems. Rudd put in a very solid performance on Q&A, but the audience was the real winner, asking some great questions which showed a high level of insight. The Liberal Party appears to have unleashed an avalanche of advertising in the last 72 hours before the TV ad blackout; they are negative in focus.

No massive change since yesterday in what the major parties have promised to fund (or axe). The Coalition had a bigger spending day and are now out at $10.45 billion net spending for the campaign so far, while Labor’s result is a net cut of $4.43 billion (see the full list online).

It might sound like a big difference, but on the scale of things — the 2013-14 federal budget is well over $300 billion — the gap between the two major parties is not large. And it’s likely to narrow in the next few days as the Coalition announces some more cuts. Here are the most recent promises from the major parties:

Kevin Rudd: Began the day with a walk in Brisbane, where he was heckled to do “some real exercise“. Ouch! He then departed for Tasmania, as he picks up the pace of campaigning in the last week. His next campaign stop is the University of Tasmania campus in Launceston.

Tony Abbott: Starting in Adelaide, the Opposition Leader had breakfast with a suburban family, watched creepily by the enormous media pack. He plans to remain in SA for most of the day, campaigning with MP Christopher Pyne and focussing on cost-of-living. At deadline he was addressing workers at a soda ash factory in Penrice.

Christine Milne: Heading to Sydney this morning and will criticise Abbott for failing to address global warming. She will then head to Canberra to announce the Greens plan to “Abbott-proof” Canberra with ACT Greens candidate Simon Sheikh. We assume it will involve some sort of huge fence. Stay tuned.

Clearly our politicians are losing it. How could we pass up KAP candidate Steven Bailey’s seven-minute campaign ad? He starts by getting naked and putting a large Katter hat over his “costings”, before holding up sign after sign describing what he believes in. At the end, the gay marriage advocate sits next to a dog with the subtitle: “And this one’s for you, Cory Bernardi!”

Greens leader Christine Milne tweeted today from Adelaide Zoo, where she was visiting the orangutans. Or were they visiting her? We’re not sure who’s in the cage from this pic. Perhaps the orangutan has come to see the new, fascinating Christine Milne exhibit. If the Greens are considering a new “politicians in cages” policy, it would probably be a vote-winner … 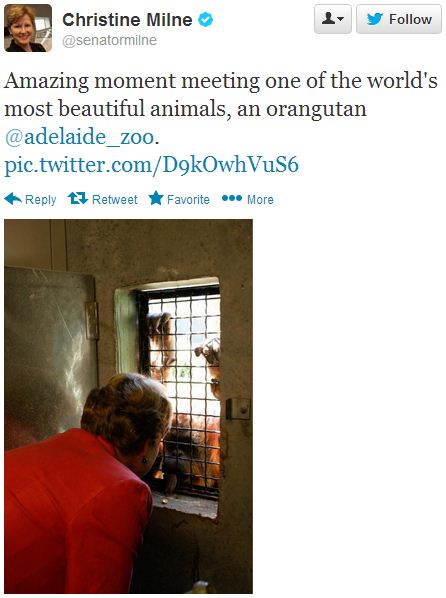 Where are all the respectable conservatives? It seems you throw a mic at the boorish cheerleaders just for balance. Fancy celebrating lack of sophistication or insight on foreign policy because it lacks cut through with downscale marginal voters.

“Crikey asked the sharpest political commentators etc” so how come Ian Brown got a guernsey? I wouldn’t expect him to pat Rudd on the back, but as least he could have the grace to acknowledge a solid, but very overdue, performance from the PM yesterday. However these guys are now beyond any rational analysis as hubris overtakes them ahead of the predicted crushing victory. I’ll support Labor on Saturday if only to register one vote against these folk who seem think they are entitled to run the country.

It’s disappointing to read such small-bore partisanship, when Labor’s performance has been such that it would be easy to award the Coalition a victory without such hackery.

Movement conservatives apparently have two modes these days, unrestrained hysteria at the injustice of them not being in power, which is only interrupted occasionally by brief bouts of wound-licking introspection, and then complete moral certainty and shrieking triumphalism about their impending victory.

This sense of raw entitlement and the epistemic closure that surrounds it is seriously scary. I worry about the children these people raise.

I’m with you, Pedantic! Make that two votes!!