ACF confused over election endorsements. On Friday we told you that Labor candidate for Wills Kelvin Thomson had been criticised for putting out a pamphlet claiming the Australian Conservation Foundation had endorsed him (the pamphlet ran a statement from ACF). Crikey ran the ACF’s response that it did not know where that statement came from, it did not endorse any political party, and that it had asked Thomson not to circulate the pamphlet any more (ACF told us Thomson’s office agreed to that).

We’ve found out there’s more to the story — and it’s ACF that stuffed up, not Thomson. An ACF staff member did indeed provide the original endorsement to Thomson, which others in ACF were not aware of when they responded to Crikey on Friday. This is today’s statement from ACF:

“ACF is a non-party political organisation and does not endorse any political party or candidate. In this case a staff member made a mistake by responding to a request for a statement to be used on Mr Thomson’s leaflet. This action was not consistent with ACF’s strict non-partisan protocols. The staff member has been reprimanded. ACF has apologised to Mr Thomson.”

Sounds like ACF has a bit of apologising to do, not least to Crikey readers who were given a bum steer.

UPDATE: Thomson said in a statement to Crikey: “I would not in a pink fit publish comments from individuals or organisations unless I had authority to do so.”

Qantas engineers to go? An aviation type reckons a rejigging of Qantas’ flying schedules could result in up to 200 engineers based in Sydney getting the sack.

“Qantas will sack another lot of engineers from Sydney maintenance areas, rumours are up to 200 will go. Minimum 30,000 hours of A380 maintenance work will be performed by mechanics in LAX.”

We put that to a Qantas spokesman, who rejected the 200 jobs figure:

“We announced several weeks ago that we will be upgrading a return Sydney to Hong Kong flight to an Airbus A380 … We are able to make this change because we have found ways to do maintenance more efficiently — and avoid aircraft sitting on the ground idle. Instead of taking the A380 out of service for scheduled maintenance on a Monday, which we currently do in Sydney, the aircraft will operate and we will utilise the 17 hours that the aircraft is on the ground in Los Angeles at Qantas’ existing maintenance facilities. This impacts one day of maintenance in one of our hangars in Sydney and we continue to do maintenance on the A380 in Sydney on other days of the week. We are still assessing what impact this will have on our engineering operations however any suggestion it will lead to 200 redundancies is wrong.”

Be prepared … to lobby for Clive Palmer. A candidate for the Palmer United Party asked the Scouts to hand out how-to-vote cards on Saturday — and, it seems, almost got away with it. A little bird forwarded us this email:

Hi xxx and yyyy,   We have been approached by the Clive Palmer Party asking for volunteers to assist with handing out leaflets on the 7 September for the Federal Election in Brisbane. They have offered to donate money to Scouts.   I have spoken to Kirsty about this and she has no issues with members doing this as long as they do not wear their Scout uniform. Scouts should not been seen to support a political party.   The person I spoke to was Veronica Ford and her contact details are xxxx. Could you please pass this on to any of your Groups who might be interested?   Thank you.

We rang Veronica Ford, running for the federal seat of Brisbane, who confirmed she had made the offer. She said the Scouts were not going to hand out the leaflets because they’ve “got an event on”. We’ve contacted the Scouts to clarify their policy on this, but surely Scouts shouldn’t be encouraged to lobby for a political party? They’ve got enough to do with lighting campfires and tying knots.

Candidate for sale. Tips has had cause to update you on Lib candidate for Eden-Monaro Peter Hendy before. A Crikey stringer snapped this poster near Batemans Bay on the NSW coast … 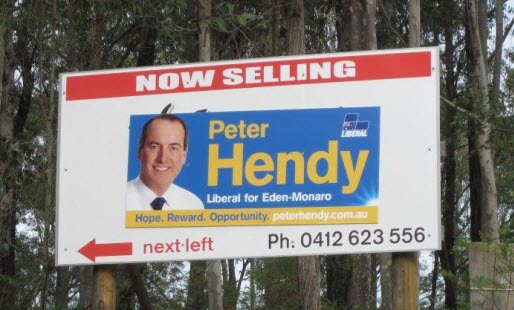 “Is he also ‘For Sale or Lease’? I suppose if you come from the Chamber of Commerce and Industry this is what you think politics is about. I don’t think I am buying,” our stringer said. Tips is relying on our readers to be the eyes and ears of Crikey. If you see anything unusual, quirky or out of line, let us know.

Touche. A sharp-eyed Tips reader spied this bumper sticker being driven around Turramurra, Sydney: “Is that the truth or is your News Limited?” (Pedants may point out that it is now called News Corp, but the gag doesn’t work.)

Get a room, Therese and Kev. It can be very embarrassing when one’s parents gush publicly of their affection for each other. So imagine what it’s like when they tweet about it to 1.4 million people … 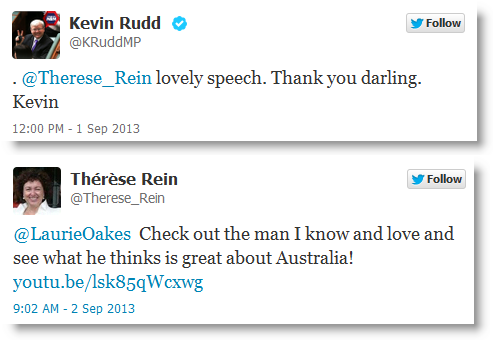 For his part, Tony Abbott often tweets about his wife and daughters. The families of Rudd and Abbott are all over the media this election campaign — for example, what they’re wearing is apparently central to the future of this country (here’s the Australian Women’s Weekly spread on the families). Tips would rather hear about policies than families, thanks. Stop wasting our time with all this guff.