The view from London: our election is ‘narcissist v misogynist’ 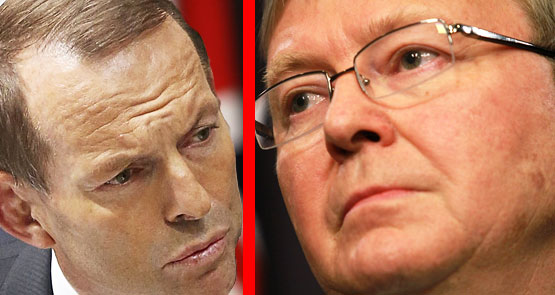 Aggro blokes, fluffed lines, daggy moments, spoof videos. Asylum rows, TV jousts, spending worries, poll trends. London’s news grinder — and this goes for both broadcasting and print — processes Australia’s election into a daily blink-and-you-missed-it snapshot. By turns lurid and sober, each episode features a testy leading character, his snappy rival, and the occasional eccentric extra. The audience is wholly unseen. The producers do their best to squeeze sense into the seconds or column inches available. Then the shutter comes down — until tomorrow’s glimpse.

At the opposite end of the content spectrum, a borderless deluge is just a click away. It includes two London-generated “brand extensions” — Guardian Australia and Spectator Australia — spraying welcome and punchy, if also hectic, commentary. Easy to find, undemanding to read, hard to love.

The combination of morsel and glut can leave the reader gasping, like Grace Kelly in Hitchcock’s Rear Window: “Tell me what you know, and what you think it means!” So it is a relief to find occasional sustenance in a more reflective or detailed piece from a reporter. Here, for example, is how David Pilling, Asia editor of the Financial Times, begins his column on the economic context of the choice between “an unlikeable narcissist” and “an unpopular misogynist”:

“For two decades, Australia has deserved its reputation as a ‘lucky country’. Alone in the developed world, since 1991 it has been recession-free. It admirably weathered the global financial crisis thanks to a sound financial system and a made-in-China mining boom that has turbocharged the economy … The term ‘lucky country’, however, has an addendum. Coined by writer and social critic Donald Horne in 1964, the full phrase is less breezily optimistic. ‘Australia is a lucky country, run by second-rate people who share its luck.’ Next month’s general election, in which voters must choose which of two flawed politicians should steer them through the choppier economic waters ahead, will test Horne’s aphorism to its limits.”

And here is the opening of Kathy Marks’ account from Sydney (where she is the Independent‘s correspondent) on a newcomer’s travails:

“When a party that espouses human rights and social justice appears to be in cahoots with gun nuts and neo-fascists, that’s not a good look. When it loses a star candidate two weeks before an election, that’s careless. And when the same party, supposedly synonymous with democracy and transparency, is accused by its own members of secretive decision-making, that could spell electoral oblivion …

“The party in question is the WikiLeaks Party, established in March by Julian Assange, the founder of the whistle-blowing WikiLeaks website … Last week, a bright light was shone on the party itself, and it illuminated, at worst, something rather unsavoury, at best, rank incompetence. Whichever, it prompted the departure of Mr Assange’s articulate and glamorous running mate, Leslie Cannold, along with four members of the governing national council. And there may be more desertions before the 7 September election.”

The good news in all areas, though — broadcasting, print and the net — is that there is commitment to the story, even amid a high English summer and big overseas crises (Egypt, Syria and the National Security Agency and Edward Snowden) that jostle for page space. Australia’s turbulent recent political history takes most credit. The Julia Gillard–Kevin Rudd melodrama, and Gillard’s viral “misogyny” assault on Tony Abbott, give the contest a rare definition here. Lynton Crosby’s high-profile role as a strategist for David Cameron’s Conservatives, and to a degree the rotation of other advisers such as John McTernan, is a reminder of significant links. (Crosby, by order of the National Federation of Headline Writers and Sub-Editors, must be referred to in every article as the “wizard of Oz.”) Assange’s presence in London’s Ecuadorian embassy, and his own candidacy, provide another ready-made theme. Even the serendipity (if that’s the word) of the Ashes series creates a positive feedback loop. So when Rudd fired the starting gun, reporters and editors were ready to run.

The attention has held up, matching if not exceeding that devoted to Germany’s simultaneous campaign. Reports have variously focused on gaffes, polls, policies and (above all) leaders. In respect of the first, Peter Dowling, Stephanie Banister, Jaymes Diaz and Mark Latham have all had their two minutes of notoriety, but Abbott — widely viewed as an accident waiting to happen — provides the most copy.

It’s not all unfriendly. The Sunday Telegraph‘s Jonathan Pearlman turned the Fiona Scott comment into a tale of daughterly maturity, under the bewildering headline “The girls guiding ‘daggy’ Dad Abbott” (August 11) — which on the paper’s (now paywalled) website was helpfully translated as “Tony Abbot’s [sic] secret weapon in Australia’s election: his two daughters”. Beneath another baffling clunker in the Sunday Times — “Rocky and the finger crusher in battle for Oz” (August 11), the inimitable Nick Cater was upbeat:

“In contrast to Rudd, Abbott — an athletic former amateur boxer who trained as a Catholic priest — has been running a low-key, low-risk campaign, promising to restore sanity and stability to government.”