Most media outlets are sounding the death knell for Kevin Rudd's Labor campaign.

Campaign reading. With less than a week to go it’s time for the appearance here of an opinion poll report. The honour goes to Dennis Shanahan’s “Abbott overtakes Rudd as voters’ favoured leader as Labor sinks to 33pc” in The Australian.

“Mobiles complicate getting a line on voters” — The Sydney Morning Herald’s Lucy Carroll notes that some of the most influential political pollsters are ignoring millions of voters because they only call landlines. Even so, analysts are unsure whether that will affect the accuracy of the polling, despite one in five Australians having only mobile phones.

“Rudd’s pitch to the heartland” — Phillip Coorey in The Australian Financial Review has a defiant Prime Minister Kevin Rudd urging Labor to fight to the very end as he seeks to claw his way back into the campaign with a job-creation package, including small business tax breaks and a showdown with the Liberal states over a threatened federal takeover of the TAFE system. 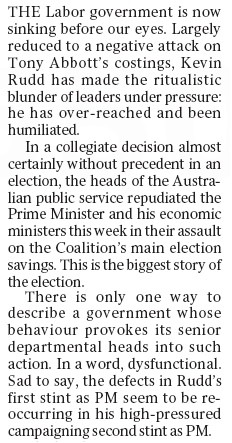 “A nation built on oration” — Troy Bramston yearns for the days of old when the policy speech was the keynote start of an election campaign, when there was a sense of occasion and the words meant something.

“The election campaign policy speech was once seen as the highest form of oratory. It was one of the most important events of a campaign.

“It is meant to encapsulate a party and its leader’s core pitch to voters. It is a chance to combine an overarching vision with practical policies knitted together with a political philosophy …

“Today, the speechwriter has been replaced by committee. Language is tested by polling companies and focus groups. It must accord with a party’s ‘key lines’. Language has become decoupled from meaning.”

“Two peas in a pod of discontent” — Peter Hartcher took himself off to some of those focus groups, much loved by political campaign tacticians, to listen to Liberal, Labor and uncommitted voters. It provides some insights normally missing from media election coverage. A conclusion:

“And here is the reason that Rudd’s scare campaign on Abbott’s alleged secret plan for ”cuts, cuts, cuts’ isn’t working. Even the Queenslanders who are angriest about the conservatives’ cuts at the state level, even though they are apprehensive of Abbott, are resigned to an Abbott government.

“They don’t like or trust Abbott. Rather, they are putting trust in the Liberals’ brand. It’s product identification, a vote for the party of Howard and Peter Costello.”

“Ghosts of Labor past” — Amy Dale in The Daily Telegraph reminds us of the damage to the Labor brand by those Independent Commission Against Corruption reports.

“The election clock is ticking and the Rudd government is running out of days to shake the sentiment stirred in so many of NSW residents and summarised in the Coalition’s ad that “nothing ever changes. Labor still stinks.”

“Two governments continents apart face defeat despite booms” — Reuters reports how voters in Australia and Norway are almost certain to boot out their governments within a couple of days of each other, fed up with blunders and scandals, and worried that wealth created by high minerals and oil prices has not been spent wisely.

“Politicians’ moral deficit” — Michael Short talks to internationally respected professor of philosophy Tony Coady, who appeals in The Age for politicians to campaign in a different way.

Our campaign honour board: Paul Kelly joins the leaders.

Other views: blogs and tweets of note as the race is declared won. Samantha Maiden, Queensland Sunday Mail: “Kevin Rudd is sliding towards election defeat …”

Tim Colebatch and Chris Johnson, Sunday Age: “Opposition Leader Tony Abbott is almost certain to face a hung Parliament of his own as he cruises to victory in this Saturday’s election … ”

Andrew Bolt, Murdoch Sundays: “This election isn’t really about the economy. That’s not why furious voters will on Saturday bury this miserable government. It’s more about sin. Yes, sin is an unfashionable word, but no other explains why Labor is so widely despised and distrusted.”

Piers Akerman, Sydney Sunday Telegraph: “Labor knows it has lost this one but it doesn’t yet know to build for the future.”

Peter van Onselen, Sydney Sunday Telegraph: “The election on Saturday will surely see a change of government, which means Labor will return to the opposition benches.”

Dennis Atkins, Brisbane’s Courier Mail: “Labor is hoping for the miracle it needs to even get to a respectable loss. But there’s none in sight …”

Dennis Shanahan Weekend Australian: “Labor is facing almost certain defeat next Saturday, with massive swings against the government confirmed in its strongholds of western Sydney, coastal NSW and Melbourne.”

Paul Strangio, an associate professor of politics at Monash University, in The Age: “Now, barring an unlikely last-minute reprieve, there remains only the dismal prospect of defeat unwept by the party’s followers.”

A word of warning from The Catallaxy Files for the Coalition: “Don’t get too cocky“:

“A week to go to the election, and even the betting agencies are declaring it for the Coalition. While there is a high probability of a Coalition victory, it is not 100 per cent. Any number of events could occur in the next week to change the course of the election. As Dick Rumsfeld said:

A letter to the Herald:

It might be less than a week to go, but no sign yet that the election is a top of the mind issue for most internet news readers,

Campaign listening: ABC 666 Canberra. It is meet the candidates week and this morning an assortment of those from the safe Labor electorate of Fraser. Gentle and polite questioning allowed candidates to promote or discredit themselves. A pleasant change to find an ABC interviewer prepared to let the audience judge just how unpalatable are the views of the Rise Up Australia Party. The Bullet Train for Australia Party candidate, a Democrat — yes, they are still alive and active in the national capital — and the sitting Labor member all were given the chance to have their say. Not exactly riveting political analysis, but the two episodes of AM provided quite enough of the serious stuff.

The nightly television news. Friday. Memories flooded back as the faces of ICAC’s guilty men were displayed again on Sydney screens. Labor could not have imagined worse timing than this for a reminder of its corrupt and murky recent NSW past.

Saturday. No merit marks for Labor’s advance man when the television cameras — journalists too, but they don’t really count — were barred from Kevin Rudd’s health centre visit. Peaking through windows does not produce a good look. At least the market visit went better with a heckler or two just adding a touch of realism.

Sunday. Happy family pictures to start and finish for Kevin Rudd at his campaign launch — an introduction by wife Therese Rein and a farewell by the full Rudd team, including a granddaughter to cuddle. All very chummy on a weekend when Opposition Leader Tony Abbott brought out his third daughter.

The daily election indicator. This morning Labor 4.8%, Coalition 95.2%. Labor down 5.2 points over the week. 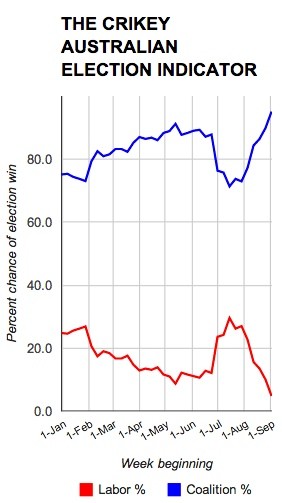 A test of psephological skill. We have the continuing opinion polls. There’s that daily Crikey Election Indicator. But now comes the definitive predictor as to what will happen on Saturday week. It’s time for the Crikey 2013 Election Contest, where the combined wisdom of our readers will reveal who will win how many of the 150 House of Representative sets. And there will be one of our wonderful Crikey prize packs for the first reader to correctly predict the outcome. Enter HERE.