Every major newspaper was in agreement over the weekend: it's time.

Everyone agrees: kick this mob out. The Sunday papers, both Fairfax and News Corp, were singing from the same hymnal with their election endorsements. The Comeback Kid aka Kevin Rudd must be hoping for something big up his sleeve, because it’s not looking good. From The Sunday Age:

To the Sunday Herald Sun: 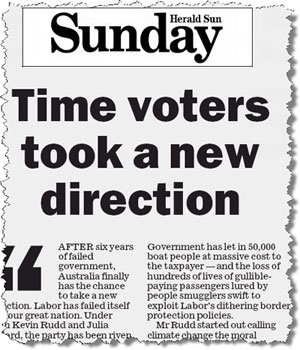 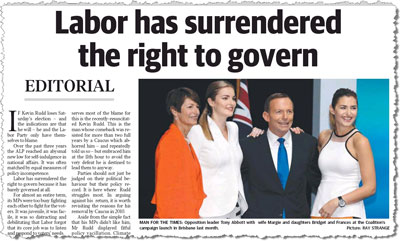 But while these editorials were tucked away neatly in the papers’ opinion pages, only one newspaper put its endorsement front and centre  … 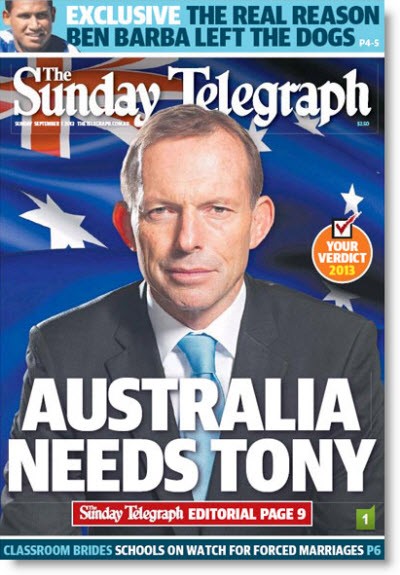 Mags in free-fall. The value of the Australian magazine industry continues to fall. The $500 million purchase of ACP Magazines from Nine Entertainment has cost German publisher Bauer more than $35 million in impairment charges, according to results for the parent company released at the weekend in Europe. It was the second major write-down this year in the Australian magazine sector, after Seven West Media slashed the value of its Pacific Magazines arm by $221 million because of persistent falls in sales, ad revenues and profits, and the likelihood that will continue.

Now Bauer has joined the club with a 25 million pound (nearly $37 million) impairment of the value of the ACP magazines it bought in late 2012. Bauer’s overall profit fell more than 75% to just on 14 million pounds (from just over 57 million pounds). Even before the impairment, Bauer’s operation result fell 25% to 38 million pounds from 50.5 million. Bauer has closed at least five magazines here since purchase and relocated the automotive titles to Melbourne as it cuts costs. But it will launch the October issue of Elle this month. — Glenn Dyer

NT News comes the raw prawn. A ball-tearing yarn splashed on the front page of NT News today about Rudd visiting the Top End for a weekend photo op. The paper is framing it as the PM spending $105,000 on a bowl of laksa. 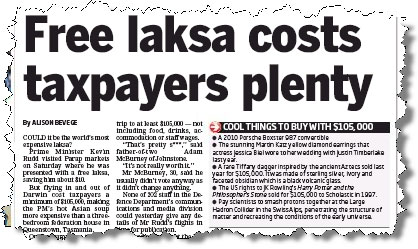 Not only does the News quote a concerned local about the outrage (“that’s pretty shit”), it also comes up with some other stuff that $105,000 could have been spent on. Genius. — Andrew Crook

Record-breaking payday for Murdoch. Rupert Murdoch has had the biggest payday for any executive in an Australian-listed company — upwards of $US96 million in shares, cash, bonuses and dividends — and is on track to top that in 2013-14, according to the proxy statement issued by 21st Century Fox in the US on the weekend. Murdoch earned between $US70 and $US84 million in the year to June 2013. That’s made up of the $US28.9 million in pay, shares, superannuation and other payments that were disclosed in the proxy statement for the 21st Century Fox annual meeting next month. The cash was actually down on $US30 million in 2012 and nearly $US33.3 million in 2011.

But there’s also the $US14.7 million from shares that vested to him in a three-year performance deal, paid out last month; plus the dividend of 13c a share on the 314 million shares in the old News Corp, which was worth around $US41 million. Assuming the cash for the vesting shares is counted in the 2012-13 year as compensation (the proxy statement is unclear), Murdoch’s total pay was around $US96 million. But the final amount for his compensation could be close to $US100 million.

In the 2013-14 financial year, Murdoch will get more. He is due to get more than $US28 million for being executive chairman of the still-to-report new News Corp ($US5 million) and being executive chairman and CEO of 21st Century Fox (close to $US24 million). Then there’s a sharp rise in dividend, which was quietly boosted from 13c a share to 25c a share in the August profit announcement, which will deliver Murdoch more than $US78 million in 2013-14 and would take his total pay to around $US107 million. But if the income from the vesting of the performance shares is taken this year, that jumps to more than $US120 million. And he is spending his loot. Last week he settled on his $US28.8 million Moraga Vineyards in the hills above Bel-Air in Los Angeles.

Murdoch’s second-in-command, chief operating officer Chase Carey, will get $US27 million in compensation for 2012- 2013, up 9% from the previous year’s $US24.7 million. And James Murdoch, the media company’s third-ranking executive, collected a package valued at $US17 million, up slightly from his fiscal 2012 compensation of $US16.8 million and nearly $US18 million in 2011. — Glenn Dyer

News Corp’s delay approved. Has someone lost the keys to the executive asset register at News Corp, or perhaps the dog ate the trial balance sheet … the ASX has granted News Corp’s request to delay filing its 2012-13 annual results by a month. News had to file by August 31, but the ASX has given the company a month’s grace.

Why? Poor little News only started life on June 28 (ignore the year of planning that went into the split in the News Corp empire) and the company has farflung assets and in the US it gets 90 days to file. The end of September is the new deadline. But the ASX’s decision ignores one important point — that when the News empire was whole, it had no trouble in filing its report within five weeks — as it did in August 2012. And this year the much bigger and more complex 21st Century Fox company met that early August deadline. The ASX reasons underline that News Corp is a foreign-controlled corporation, so the various newspapers are also foreign controlled. — Glenn Dyer

Video of the day. Vale veteran British broadcaster David Frost, who died of a heart attack at the age of 74 over the weekend. Frost was most famous for his interviews with disgraced US president Richard Nixon. Here is his conversation with WikiLeaks founder Julian Assange in 2010.

I’m not too convinced at the wisdom of crowing about the ascendency of the lesser of two weevils – let alone crowing about “our” part in it?

On Sunday when I went to my local newsagent to buy a Fathers’ Day card ($5.00) I was offered a free copy of the Sunday Telegraph (cover price $2.50). I declined. New Corporation Australia clearly wanted as many people to see that front page as possible. Free advertising space on the whole front page of Sydney’s widest circulation newspaper, plus giving away how many thousands of copies for free to people who would not otherwise have bought a newspaper on Sunday. It must be costing them a fortune. They’ll be back to collect some time after Saturday.

Interesting story on the Sunday Telegraph front page.. son of a friend is a paperboy in the Penshurst area sold out of Sun Heralds last week unexpectedly as the most buyers couldn’t come to buy the Tele with the Abbott visage, the same people that would have bought a Tele the previous week.

I did consider accepting a copy of the Sunday Telegraph. I could have used the front page to line the Kitty Litter tray. But then I remembered that I don’t have a cat.