Australians around the world have started voting by post and in person. But with hundreds of thousands disenfranchised due to strict AEC rules, will their votes make a difference? 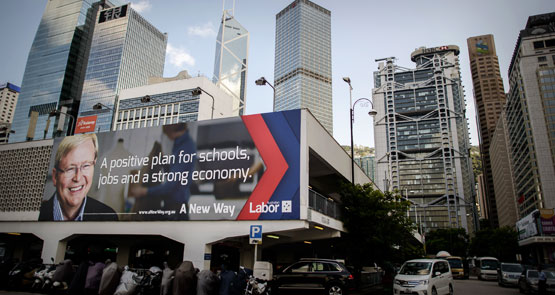 From New York to Buenos Aires, Vienna to Mumbai, thousands of Australians who are overseas have started queuing up to vote at 102 Australian diplomatic missions around the world, which opened for voting this week. Billboards spruiking Labor’s “New Way” (and new leader) have appeared on overpasses in Hong Kong and near polling stations in London. Australian citizens who are living overseas can also vote by post; more than 1.17 million postal vote applications have been processed so far (though the majority of those are for Australian residents who can’t or don’t want to queue up to get their sausage and make their mark on September 7).

But making sure you are enrolled to vote while overseas isn’t easy. Australian citizens who are permanently settled overseas and say they have no intention to return are ineligible to vote (you must intend to return to Australian within six years in order to enrol), as are citizens who failed to notify the Australian Electoral Commission of their intention to vote by the deadline, August 12. Anyone who has been living overseas for more than six years and fails to re-enrol every year will be struck from the electoral roll, and once removed from the roll, citizens must return to Australia to re-enrol. Of the roughly 1 million Australians who live overseas, the AEC estimates between 70,000 and 85,000 will vote in this election. In 2010 it was fewer than 75,000.

The arduous process is particularly galling to the Labor Party, which believes overseas citizens tend to be left-leaning voters.

“People are shocked to find that Australians’ fundamental right to vote is taken away … I think it fundamentally changes the character of Australian politics,” Paul Smith, president of ALP Abroad based in London, told Crikey. “If you look at the election results of Australia House [in London] for example, it mostly resembles an inner-city electorate. The outlook of most Australians who are overseas are global professionals, they’re people who are educated. It’s an outlook of people who are global and embracing of the world. If you’re missing a million of those citizens, it changes your politics.”

But with most polls favouring the Coalition this time around, Smith says Liberal voters abroad have become more active than in recent elections. Dan Ryan, former head of Australian Liberals in Asia, told Crikey: “We are quietly confident of turning Red China a deep Liberal blue.”

Once enrolled, Australians who are living or holidaying overseas can apply for postal votes through their local diplomatic mission or turn up to the mission to vote in person. Overseas votes are collected by each country’s mission, and they have 13 days from election day to be returned to Australia to be counted in the Australian seat where the voter last lived. For seats with very close margins, that could mean a nail-biting two weeks, and overseas votes could be the deciding factor.

“We are quietly confident of turning Red China a deep Liberal blue.”

“If the AEC knows that X number of votes have been cast but there’s still a parcel of overseas votes, it could be several days” before a decision is made, an AEC spokesman said.

Which party will be keeping its fingers crossed for a high expat turnout? It depends who you ask. Both Smith and Mark Chan, current president of Australian Liberals in Asia, say the overseas citizenry are highly engaged with politics back home. They both cite Australia’s reputation abroad as an issue that resonates with expat voters, but local politics and the local economy also influences Australian voters.

“One of the things that Australia is well known for is its relative stability as an investment destination for businesses and individual investors. Unfortunately, a large number of businesses that I’ve spoken with based here in Hong Kong and China have highlighted how the mining tax and the carbon tax introduced by the Labor government have provided an element of regulatory uncertainty and an increased cost base that now makes investing into Australia all but difficult to justify,” said Chan.

By contrast, Smith says the UK government’s cuts and the decreasing number of job opportunities in Britain will push an already Labor-leaning expat electorate further away from the Coalition. He says most expats want to return home someday, and they want to know they will be able to find jobs when they do. “People don’t want to see an importation of David Cameron-style cuts. People have an idea over here much more than Australians do of just how devastating that has been to the British economy. I don’t think most Australians can comprehend what it’s like not to be able to find a job.”

About 40% of Australian expatriates live in the United Kingdom, so it is no surprise that by far the busiest diplomatic mission is Australia House in London, which handled 16,041 votes in the 2010 election. The second-busiest mission was Hong Kong, with 7797, and then Singapore, where 3277 Australians cast their ballots. Even remote Casey Station in Antarctica is helping Australia’s Antarctic expeditioners participate in the democratic process. Australian Defence Force personnel can vote at polling stations at their overseas bases, but they make up less than 3% of the total overseas vote.

“He says most expats want to return home someday, and they want to know they will be able to find jobs when they do”. Why would this mean leaning away from the coalition? If they want jobs to come home to it’s the coalition who will make that happen. Otherwise, under a Labor Government, and providing they currently reside in an Asian country, they should apply for residency there and return as an immigrant. That will be a sure way to continue working in Australia. ALP = Building Australia favouring unskilled immigrant labour…