Kevin Rudd's modest but realistic campaign launch reveals the problems of a party that has had its "big picture" nullified by its opponents. 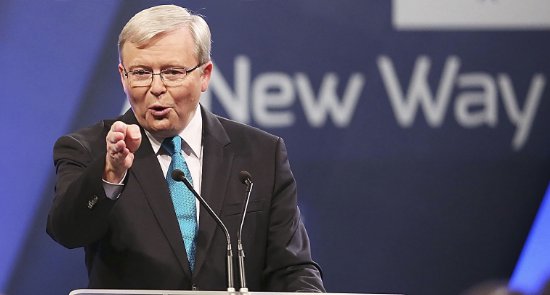 One of the underappreciated things about Paul Keating was that, even as the shadows lengthened on his prime ministership and the Coalition took up and held a solid lead over Labor ahead of the 1996 election, he never quit reforming. Even an economy struggling to shake off the damage of the early ’90s recession didn’t deter him; if anything, it spurred him on. It wasn’t enough to establish enterprise bargaining after the 1993 election, recognise native title and work to establish APEC free trade goals. There was superannuation to expand and the National Competition Policy to force through a recalcitrant Council of Australian Governments. And that was before you got to issues like the republic. Reform, reform, reform — for Keating each term in government was precious, a limited time period to drive an agenda that was a seamless whole that stretched from our level of national savings to Australian identity to our relationship with indigenous Australians to our economic and security future in Asia.

As a vision, of course, it fatigued voters, who turfed him out in 1996 in favour of a man who promised a national pause in which Australians could be relaxed and comfortable and never, ever have to worry about issues like a GST. Good policy, it turned out, wasn’t always good politics.

How much Keating approved yesterday as he watched Prime Minister Kevin Rudd “launch” Labor’s election campaign yesterday, less than a week out from an election in which the party appears headed for defeat, isn’t too clear. Keating got his nod, along with Hawke, also present, Whitlam and — in a welcome grace note — Julia Gillard as the architects of key Australian reforms (super, Medicare, tertiary education, DisabilityCare) from Rudd. But Rudd’s launch speech was strictly back-to-basics, focusing on more training, on support for small business via tax write-offs, on guarantees to job seekers.

And then there was the protectionist tone of Rudd’s proud extension of “Australian Industry Participation Plans” to require more operators of large projects to demonstrate how they’re seeking to involve local firms in their supply chains — or put more simply, additional paperwork for big projects. It’s protectionism for wimps, without even the ATM-like dispensation of cash that characterises Labor’s car manufacturing policy, like Rudd embracing economic nationalism but not actually proposing to do anything to restrict foreign investment beyond a few vague aspirations.

Rudd, of course, had already tried the “vision” thing over the last fortnight, and it made him look foolish: northern Australia, high-speed rail, moving naval bases around for the hell of it. If Keating’s “vision” was a coherent set of strategies that he had woven together over more than a decade in politics before even becoming a senior minister, Rudd’s “vision” was the butcher’s paper from an all-nighter with advisers the day before. The focus yesterday on jobs, on training, on small business tax arrangements, was thus a welcome return to reality, however Small Picture, a return to the turf that Labor is strongest, or least weak, on: creating and protecting jobs for Australians, giving Australians an opportunity through education and training. There was even a long-term threat to take over technical training from the states.

This isn’t, or isn’t merely, to make the tired, nostalgia-laden comparison with previous generations of politicians. Part of Rudd’s dilemma, and it would have been Julia Gillard’s dilemma too, is that it’s hard to use a substantial reform program as the basis for an election campaign when your opponent has signed up to it. There’s bipartisanship on DisabilityCare and even a levy to pay for it; and while the Liberals patently don’t believe in the basic principles of the Gonski education funding reforms and would prefer simply to throw taxpayers’ money at private schools, they’ve locked themselves into deals with key states that will prove very difficult to escape. Between that, Opposition Leader Tony Abbott’s refusal to countenance IR reform beyond re-establishing Australia’s Stasi in the construction industry and shadow treasurer Joe Hockey signing up to Labor’s fiscal policy, the Labor vision of protecting jobs, overhauling school funding and establishing DisabilityCare becomes problematic for filling five weeks of an election campaign.

Thus Labor’s relentless focus on costings: the Coalition’s refusal to reveal its costings except to hand-picked press gallery journalists provides some substance to the Labor charge that its numbers don’t add up and it will be forced to slash and burn the budget. That’s entirely possible, but it’s not currently reflected in the broader unity ticket now between Hockey and Treasurer Chris Bowen, that there’ll be no return to surplus in the next parliamentary term. The Liberals’ fiscal strategy is less about slashing and burning than about hoping the economy picks up and lifts revenue sufficient that they can get back to surplus more quickly.

(Of course, if that happens, interest rates will return to more normal levels fairly quickly, but that’s a political problem for down the track.)

Yesterday’s launch was thus one of a party visibly wondering where to go next not merely in a losing election campaign but in the longer term. Mere managerialism can’t suffice for Labor, especially given a biased media that will relentlessly attack it  on every possible front. It has to offer voters more — but more of what?

It is a pity that Labor doesn’t adopt good vocational education polices until a week before an election it seems likely to lose.

BK “As a vision, of course, it fatigued voters, who turfed him out in 1996 in favour of a man who promised a national pause in which Australians could be relaxed and comfortable and never, ever have to worry about issues like a GST. Good policy [you referred to “reform” and more “reform” BK], it turned out, wasn’t always good politics.”

Will Part 2 of your “Australian Elections: the Longer View” substitute Howard for Keating as the subject of your remarks?

He was a reformer, especially if you add his support for Hawke and Keating up to and including Keating’s last IR reforms. What a pity that Work Choices was so bungled….

A friend of a friend of a friend has added to the circulation of a letter to The Age which the author and friends are obviously pleased with – nice show of learning, maybe a bit much for Age letters editors?? Anyway, it could be up your street Bernard and you may wish to comment. It says that Brian Costar has missed the mark in attributing all the ALP’s lack of vision and regenerated philosophy to poll gazing and search for a vote winning messiah. It points to Michel’s “iron law of oligarchy” and applies the idea to the trade union leaders’ ownership of the ALP past and present. (WikiP tells me Michels wrote about 1911 and was a “fascist” and “socialist” amongst other things). And indeed, wouldn’t you as a well-heeled investor-partner in the contemporary ALP LLP make the appointment of the right managing director your first priority? What do you think BK?

I have come down to a very simple summary of how this election is developing. You see Kevin uses grown up words. Stringing sentences together to explain complex issues and focusing on a long term vision. How you need to remain flexible as the world economy is moving and shifting at a pace never seen before. Like a college lecturer boring the hell out of us in the class room where all this boring stuff makes us turn off.

On the other hand Tony is very simplistic with his statements. More like talking to the preschoolers rather than college students. “Stop the boats”, “Make a better economy”, “Sorry about that, it was just a Dad moment”, There are not just goodies and baddies”. Oh the words of such wisdom has warmed the cockles of the Australian swinging voter.

Maybe in this last week the Australian attention span will increase a bit so we stop and actually absorb some policy differences and, heaven forbid, become a little more critical on what is on offer.

Re Mr Jofffe’s comments – Howard basically brought in the GST in 11 years of government. His worshippers like to make the claim, but the record isn’t reflective of it.

They tinkered with superannuation laws, made a hash of those with serious demographic time bombs left for someone else to defuse, loaded up middle and upper class welfare, didn’t have the strength to actually implement their own policies on education funding, so that the wealthiest private schools still got over the odds.

Then they went berserk with unsustainable IR laws, which were annulled as soon as they were voted out.

Hardly makes for a profound record of reform. One genuine reform left standing, to Keatings many.

But let’s not sully up a campaign with reality. This one has been terrible, and it’s easy to see why Rudd was so disliked, and dysfunctional, as the PM. He fair dinkum can’t keep on message. Lack of focus and an inability to explain their genuine successes are Rudd’s problems, nobody else.