Freelance journalist James Rose is in the infamous seat of Fisher, with Peter Slipper on one side, Mal Brough on the other and apathy as far as the eye can see in between. 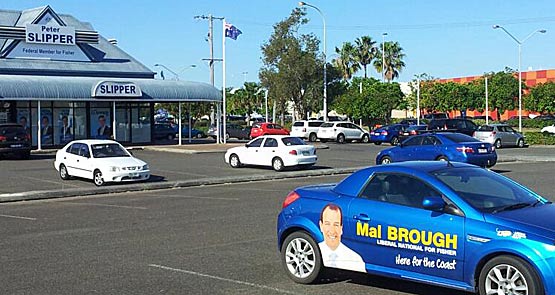 It’s still winter in Kawana, but the shade is beckoning as the mid-afternoon sun bites. A thin southerly disturbs the palm fronds that go for native vegetation here, clustered about the urban sprawl that spreads like a stain, crowding up to the stunning beach strip. It’s all traffic, big box stores and a kind of gritty, consumer functionality peopled by sour, ruddy faces and framed by unyielding surfaces. This piece of Gold Coast-style suburbia dropped into the Sunshine Coast, an hour’s spin northwards up the politically contested Bruce from Brisbane, is riven by broad streets and broader views. And Shakespeare, yes, there’s a bit of Shakespeare here.

Welcome to Fisher. Sure it’s Queensland, and we know Queensland is in play. Although it’s considered a safe Coalition seat, there’s too much emotional swirl here to play just the numbers. Taking in the urban blight of the coastal strips like Kawana and rural, greenie pockets like Maleny up in the high hinterland, Fisher is one of those nondescript, hard-graft seats that don’t often rouse elec-sperts, but it’s not the politics that makes this seat buzz. It’s the personal.

The secret to Fisher is right here on the corner of Nicklin Way and Pt Cartwright Drive. In a dishevelled block around the corner from the Chinese restaurant, the print shop and the paint store sits the electorate office of the incumbent member, independent Peter Slipper, and the campaign office of Liberal National Party candidate Mal Brough. Fierce rivals for more reasons than either of them are likely to get votes, Messrs Slipper and Brough might be like those cartoon characters — the sheep dog and the wolf — who greet each other each morning and then set about trying to hammer each other out of existence during office hours.

And in between their offices, a simple store front: Kresta Blinds and Curtains. How perfect. It’s here, surely, that Shakespeare lives and spins this febrile tale into script.

If you took the Slipper v Brough war at face value — with the frisson of allegations of s-xual harassment, gay claims, bloated expense accounts and political skulduggery at the highest levels — you might think this the centre of the electoral universe. Just a few metres away though, opinions are not so much heated as defeated.

The Kawana Waters Hotel abuts the marina, with its floating flotilla of rich toys and skanky trawlers. Over the water is the Portside Seafood Restaurant, where “All Meals are Under $20”. One bar-girl titters and says “I don’t vote” when asked about the boys down the road. Another, Sarah, professes a warm feeling for Pauline Hanson but says she will vote informal. Another older lady at the pokies said she won’t vote for any of them, “but don’t tell anyone”, before returning to her spinning royalty. The lady at the front desk, who doesn’t give her name, says they all suck and that she is looking at the minor parties for the first time.

This dismal start of my straw poll around the offices of the two most prominent candidates here is confirmed as a micro-trend as I buttonhole people within a larger radius. “Louise”, a receptionist at an office off Nicklin Way, a few minutes walk from the Brough/Slipper shopfronts, says she used to vote Greens, until someone told her that was a vote for Labor. She says she has dropped off the enrolment list and argues, “we should be allowed not to vote”.

More than half of those I spoke to said they are not on the roll, won’t vote or will go donkey or informal. The toxic spill of the Slipper/Brough saga appears not to have raised the stakes but to have lowered them to the sub-strata. Voter fatigue, ennui and disinterest was common.

Vicki Magic, owner the Business Matters magazine, puts a more constructive turn on the mood of disillusionment out in the street: “I would like the law to be changed so that whatever declaration was made has to be kept, legally. If you break a contract in business, or in life, it’s illegal. Why should politicians be any different?”

“The former speaker asked me about the people I’ve spoken to, eyes roaming, perhaps trying to see my interlocutors behind my head.”

The Slipper and Brough Show has certainly had some, well, contractual issues in relation to public perception. Peter Slipper has tripped like Tiny Tim through the tulips of Queensland’s conservative parties, before becoming an independent in 2011 and a Labor pot plant on the speaker’s chair. Mal Brough was a Howard government minister before losing his seat in 2007. That seat was Longman, just down the road towards Brisbane. He then railed against the Liberal/National merger in Queensland in 2008, before sensing the political suicide he was committing and jumping on board, winning pre-selection for the LNP for Fisher and presiding over the most infamous lunch menu in Australian political history.

In between them is James Ashby, the meat in a power sandwich, but that’s a politically loaded suggestion — and a really bad visual.

It can be said both Slipper and Brough are at least consistent in their inconsistencies, and if the passionate boredom I discovered has a source, perhaps it’s right there.

I dropped into Brough’s campaign digs, unannounced it must be said, but he was on a call. And he wasn’t interested in talking to Crikey. So, count them, 14 steps away I tried Slipper’s space. I saw him emerging from his white 4WD, and I introduced myself and asked for a chat. He had just been to the doctor, he told me, looking a little bewildered. Eyes moving, he told me to come back later.

When I returned, we were joined by his wife, Inge, who stood at the door throughout our 50-minute chat. She interjected throughout, often without waiting for the beat of the conversation to swing her way. The former speaker asked me about the people I’ve spoken to, eyes roaming, perhaps trying to see my interlocutors behind my head. “What did they say?” he asked. I told him about the apathetic vibe I had found. He launched into asylum seekers. “They’re mostly economic migrants,” he offered, unprompted. I asked where he had got that information, to which he replied: “My reading on the subject gives me that general understanding.”

He was keen to tell me about his reforms as speaker, arguing many of the ideas Malcolm Turnbull raised on House reform were his and that “I’ve only done about 15% of what I wanted to do”. As he spoke I was conscious of a chip the size of the speaker’s chair on his shoulder, just above the knives in his back.

Things soon turned to Brough, with Slipper accusing his rival of branch-stacking to gain preselection and raising the possibility that Brough might yet be dumped by his party. Slipper has placed Brough last of his nine preference options in the seat, suggesting even a Greens government would be sweeter than one with Brough in it. And, should the LNP man win, “a legal case [against him] is a matter for consideration”.

Even after September 7, the Shakespearean drama being played out here at the corner of Nicklin Way and Pt Cartwright Drive may well carry on.

I spoke to a middle-aged woman sitting on the pavement outside Slipper’s office, seemingly on a coffee break, as she fingered her phone. “I can’t remember who I voted for last time. I just vote for who my mother votes for.” She seemed oblivious to the political hotbed on all sides. As I left I saw her looking out over the asphalt desert of the car park, eyes deadened and blank, with a mind full of the daily stresses it seems Slipper and Brough, at least, have failed to address.

There is more than one world on the corner of Nicklin Way and Pt Cartwright Drive.

Hi James..was there not a male in sight that all your questions except for those to Peter Slipper were directed to females who were obviously suffering from sunstroke to the brain?
Women fought and died for our right to vote these women are a disgrace to our sex.

As a resident of Fisher, this article misrepresents the real dynamic. There are 8 other candidates contesting which has created a vibrant discussion of the value of Greens v Labor, Palmer v Katter,Family First v Australian Independents. More homework please and less stereotyping.

The small random sample of potential voters here is quite shocking. They fail to understand that power truly vests with the people – and this bunch deserves what’s about to hit them.

No mention, James, that the judge in the Ashbygate court case ‘tipped a bucket’ on one of the candidates you focused on? Take a bow, Mal Brough! Can’t imagine why you are still in the race – you are a total disgrace. And so is the rAbbott for not removing you from contesting Fisher on behalf of the Coalition. Says it all really. YUK!!

I must live on a different planet to three of the four posters above.
Women get verbally insulted enough, thanks.
I don’t think that parties like Family First, Palmer or Katter, et al., create any sort of ‘vibe’.
Murdoch will not survive the thrashing the Australian public will give him once they realise he brainwashed them into voting for Abbott (when they’ve finished savaging Abbott, of course).
I paid a subscription to Crikey but had to learn about Ashbygate from IA? Thanks, CML.