Labor's vote has collapsed over the last fortnight, leaving the Coalition poised for a strong win -- and voters are beginning to warm to Tony Abbott. 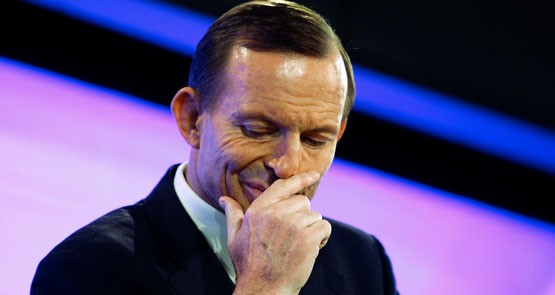 Labor’s vote is down 3 points to 35% since last week. The Greens have maintained their recovered position of 11% (although, on a weekly basis rather than Essential’s rolling fortnightly average, they’re down to 10%), and the Coalition has picked up a point to 44%. With Others on 10%, the two-party preferred outcome is 52-48% to the Coalition. Just two weeks ago, Labor’s primary vote was on 40%, which might have provided a platform for a narrow win. The loss of 5 points in just a fortnight suggests Prime Minister Kevin Rudd’s campaign has come badly off the rails.

Essential’s weekly results, with a sample size of around 900-1000 rather than the usual approximately 2000, illustrates how steady the Coalition’s vote has been throughout the campaign, and show its two-party preferred lead last week rising to 53-48%.

Opposition Leader Tony Abbott has also narrowed Rudd’s lead as preferred prime minister and appears to making inroads into voters’ longstanding antipathy to him. Rudd now leads as preferred PM 44-38%, from 43-34% last week. Abbott’s net disapproval rating is now just 9 points, down from 15 points last week, and Abbott is performing much more strongly on leader attributes than in early July. For example, the perception that he is trustworthy has increased by 6 points, visionary by 9 points, a capable leader by 4 points; the perception that he is aggressive has fallen 3 points. Rudd, however, has gone backwards in attributes like superficial (up 10 points), aggressive (up 10 points), trustworthy (down 7 points) and arrogant (up 11 points).

The chances of Labor turning around votes at this late stage are slim: only 15% of voters are now saying they may yet change their minds — and only 9% of those intending to vote Liberal say they might.

Essential also provides a snapshot of how the campaign has shifted — or failed to shift — voters’ views on the parties’ capacity to handle different issues. Since just before the start of the campaign, there’s been no shift on trust in who is best to handle the economy (the Coalition leads by 15 points), virtually no change on education (Labor leads the Coalition by 9 points, down from 10 ); Labor’s slender lead on health has fallen from 3 points to 1, and its lead on IR has stayed about the same (10 to 11 points). The Coalition’s lead on asylum seekers has fallen slightly, from 13 to 11 points.

Voters down on Rudd and Abbott — and deeply worried about Workchoices

Is Abbott an Australian citizen? Biographies do not state when he became a citizen since his arrival from England. Is he eligible for membership of the Parliament leave alone PM?

That would be one of the first things he would have thought of.

You have no idea how much I would love you to be right.

Murdoch’s bitch seems to have it in the bag. ‘Buy back the boats’ is obviously a winner. The bogan streak that runs right through middle and wannabe Australia is delivering in spades for this wholly inadequate leader. You get the politicians you deserve and this one comes gift wrapped with yesterday’s Daily Telegraph. I thought the lumpen nightmare that saw Howard elected 4 times had passed through the lower bowel of the body politic, but clearly the ‘hemorrhoid’ lurking at the end of this nasty meal of dishonest, xenophobic entitlement politics was destined to leave his mark. The cure should be interesting to watch.

Kraken, you have suummarised it in one. For those that vote for the LNP (and Palmer/Katter and the other tea party lites)be careful what you wish for; for the rest of us: GHUA!