Confusion over Thomson endorsement. Labor MP Kelvin Thomson had glowing endorsements in a recent campaign pamphlet, which was posted out to everyone in his electorate of Wills. Some of those quoted are not happy about it and say they never endorsed him (check out this and plenty of other election leaflets at this excellent website). 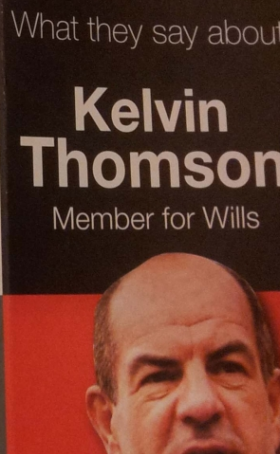 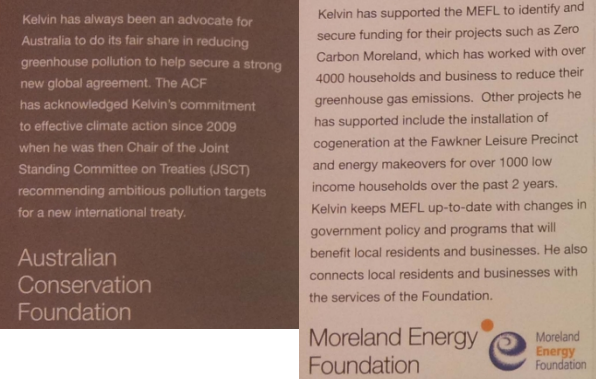 ACF told Crikey: “ACF is a non-partisan organisation that does not endorse any political party. We have asked Mr Thomson’s office not to circulate this material any further.”  The group contacted the Australian Electoral Commission to say the endorsement was not authorised, and it is not sure where the statement came from.

A spokesman for the Moreland Energy Foundation said: “I think it appears more of an endorsement than I’d intended”, although he confirmed that yes, Thomson had supported Moreland’s initiatives.

A spokesman for Thomson stood by the pamphlet: “The endorsements were discussed and approved by all concerned … we had approval to use those words”. The spokesman said this was arranged some time ago. He said the pamphlet would not be distributed again, but there had been no plans to do this anyway. So is someone from ACF in trouble for backing Thomson, or has Thomson gilded the lily? You decide.

UPDATE: The ACF issued this statement on Monday, September 2:

“ACF is a non-party political organisation and does not endorse any political party or candidate. In this case a staff member made a mistake by responding to a request for a statement to be used on Mr Thomson’s leaflet. This action was not consistent with ACF’s strict non-partisan protocols. The staff member has been reprimanded. ACF has apologised to Mr Thomson.”

SECOND UPDATE: Thomson said in a statement to Crikey: “I would not in a pink fit publish comments from individuals or organisations unless I had authority to do so.”

… and robocall dirty tricks. Have you been lucky enough to cop some robocalls during the election campaign? Plenty of our readers have — and one enterprising person emailed it in. It’s an ALP recorded message bagging Liberal candidate for Indi Sophie Mirabella. Listen to the recording here — and please record and email in any robocall you receive. Creepy practice — does it affect voters?

Abbott still dodging Q&A. The ABC has all but given up on Tony Abbott appearing on Q&A on Monday night alongside Prime Minister Kevin Rudd. The ABC has been desperate to get Abbott on the show, which rates far higher than Sky News which has hosted the previous election debates. The offer still stands for the Opposition Leader to appear in a stand-alone program next week, but nothing is locked in.

Poor IPA. Oh dear — looks like revenue is down at the IPA.

According to the group’s statement of finances for last financial year, membership has surged to 3,369, revenue is down, the number of donations are down, cash reserves are up, and expenses are down. The Institute reckons revenue was down because it was trying to sign up members rather than chase money.

Loose lips sink ships. Now this is totally anonymous, so make of it what you will …

“Peter Reith was overheard on St Kilda Road, Melbourne at approximately 1050hrs on Thursday commenting that he did not believe that Tony Abbott was a collaborative decisionmaker in the way John Howard was, and that was a problem for many Coalition supporters (tobacco companies). Further, he commented that Mr. Abbott had made some shocking decisions that would come back to bite him once he took office. Perhaps someone should ask Mr. Reith about these comments.”

“… these investigations and advice have left the government in no doubt that Israel was responsible for the abuse and counterfeiting of these passports … No Government can tolerate the abuse of its passports, especially by a foreign Government. This represents a clear affront to the security of our passport system. Nor can we tolerate the abuse by a foreign Government of the personal details of the Australian nationals concerned. These are not the actions of a friend. I regret to advise the House that this is not the first occasion that Australian passports have been misused by Israeli authorities …”

Tips has heard from a well-connected figure who knows how Mossad works, who says both sides would have known the passports were being used in this way and Australia had to criticise Israel publicly, while privately the intelligence services of both sides continued to work well together. It was a case of ejecting a diplomat to appease the public, while privately the relationship was fine and the diplomat could quietly come back a few weeks later, the source said. People who’ve taken an interest in Mossad won’t find this tip surprising, but it’s interesting to hear it from the horse’s mouth …

Greens abandon Giles in Scullin. The Greens have failed to preference Labor’s progressive candidate in Scullin, Andrew Giles. Greens how-to-vote cards show that the party is running an “open” ticket in the northern suburbs seat, despite Giles’ work defending refugees on the Tampa case and high profile backing of marriage equality. Last week, Crikey revealed that thousands of open HTVs were distributed in marginal Victorian seats, in contravention of a deal with Labor to preference the party over the Coalition in exchange for Labor preferences in the Senate.

Robocalls leave me cold especially if they are set up to put down opponents. They only make the caller look bad. However, I wouldn’t vote for Sophie Mirabella in any case.

Why does Aus even bother to have an intelligence force? It seems the NSA and Mossad have us covered. /derpyjoke