Rupert on stage: Williamson’s happy, but will the Murdochs like it?

Rupert Murdoch came to life on the stage last night for the world premiere of his bio-play. Playwright David Williamson tells Crikey it's a portrait of an ideologue and quasi-politician. 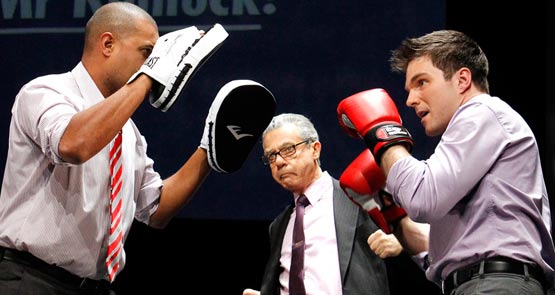 David Williamson’s keenly anticipated play Rupert, charting the career highs and lows of the media mogul, had its world premiere last night at Melbourne’s Arts Centre. Williamson, no doubt, was nervous about how the paying public (and the reviewers; including Crikey) would react to the bawdy, cabaret-style show he’s spent 18 months developing. But before the curtains even came up, his mind was already drifting to next week, when a large group of Murdoch relatives is booked to see the show.

“There are a lot of them and they’re apparently entranced by Murdoch’s achievements,” Williamson told Crikey. He’s going to sit down for dinner beforehand with the extended Murdoch clan. Rupert himself won’t be among them, although Williamson says the Melbourne Theatre Company has sent a “genuine invitation” to the News Corporation chairman to attend.

When the MTC programmed this year’s season, Williamson had no idea Rupert would open during an election campaign that has been dominated by debate about the mogul’s political influence. But he says the hostility towards Labor from The Daily Telegraph and Courier-Mail is hardly surprising. “It’s not as if this is the first time Rupert has used strident ridicule to get rid of a political opponent,” he said. The classic example, he recalls, was the 1992 British election in which The Sun campaigned against Labour leader Neil Kinnock with headlines such as “If Kinnock wins today will the last person in Britain please turn out the lights”.

Among those in the crowd last night were Gina Rinehart biographer Adele Ferguson, refugee advocate and James Hird silk Julian Burnside, Radio National host Waleed Aly, and The Australian‘s media scribbler Nick Leys and partner, 7.30 reporter Louise Milligan. By chance, Crikey was seated next to Malcolm and Tamie Fraser. The former PM looked sharp in three-piece suit and orange tie, his long legs butting up against the seat in front of him.

The idea of the play is that this is Murdoch’s story told his way. Sean O’Shea (pictured, middle) plays Rupert at 83, an ageing titan reflecting on past glories and battling to cope with new technology such as his iPhone. Guy Edmonds (right) plays young Rupert: an energetic, ruthless, overweeningly ambitious jock who, time and again, proves the doubters wrong. It’s up to a cast of six to play all the other crucial characters in Murdoch’s life. Full Frontal star Marg Downey plays Murdoch’s mother Elisabeth, daughter Elisabeth and Margaret Thatcher; Simon Gleeson takes on James Murdoch, Kerry Packer, Gough Whitlam, Tony Blair, Bob Hawke and Sunday Times editor Harry Evans among others.

All the key moments in Murdoch’s life are covered — starting with his time studying at Oxford and ending with the UK phone-hacking scandal.

Although the play covers Murdoch’s flaws and failures, Williamson avoids editorialising.  He wants the audience to decide for themselves whether Murdoch is a villain, a genius or both. Williamson, who sits on the opposite side of the ideological spectrum to his subject, got inside Murdoch’s head by reading every biography and profile he could find.

“He’s a quasi-politician, he’s an ideologue and he wants his opinion to be taken notice of.”

“The more I read the less I thought he was just a businessman interested in profits,” he said. “He’s interested  in power and not just for its own sake. He believes his ideological message is necessary for the world to learn. He’s a quasi-politician, he’s an ideologue and he wants his opinion to be taken notice of. In his head, he’s beneficial to the human race because his support for free market economics has allowed people in places like China and India to rise out of poverty.”

Although Williamson came to admire Murdoch’s business foresight, he said: “I still find his ideological fervor disturbing. He’s an extreme free marketeer who takes the view that everything private enterprise does is brilliant and everything the government does is shocking. I believe life is a lot more complicated than that and that government spends for the public good — look at the NDIS, Gonski, the NBN the school hall program which, despite a campaign by the Murdoch press, was very successful.”

While long at three hours including an interval, the play skips along at a fast pace (until dragging at the end). The emphasis is on gags, slapstick and swearing — not psychoanalysis. The crowd was in hysterics every time foul-mouthed Frank Packer and bumbling sons Kerry and Clyde appeared on stage.

Everyone bar the Neil Chenoweths and Michael Wolffs of this world are likely to learn something new about Murdoch — or remember something they’ve forgotten. Such as the fact Murdoch was once a Marxist with a bust of Lenin on his windowsill. Or that The Australian campaigned for Gough Whitlam’s election (before turning against him). Or how close his empire came to collapse in 1990.

Among the most powerful moments in the play are those shared between Rupert and the women in his life. Mother Elisabeth is no fan of her son’s smutty tabloids, or his decision to divorce wife Anna. “Is it possible you might do something, sometime that would make me proud?” she asks.

The final scene, showing Murdoch mired in the phone-hacking scandal, is acted out in front of a large projection of Milly Dowler — the murdered schoolgirl whose voicemail was hacked by News of the World reporters. Williamson’s thesis, however, is that the hacking affair will be a mere blip for Murdoch, who emerges from each crisis stronger than before. The play’s final line carries an ominous message: “I am not finished yet.”

It’s not The Wall Street Journal. But it’s not the News of the World, either. Melbourne Theatre Company’s bio-play Rupert is more like the Herald Sun: superficial, righteous, but (Andrew Bolt’s column aside) mostly inoffensive. You won’t learn much, but it’s guiltily entertaining.

The major problem with David Williamson’s work is its ambition. And given we thought that had all but drained from the prolific playwright, we can hardly be cross. In trying to capture the 82-year-old life of Keith Rupert Murdoch, or at least a 61-year-old working one — the most remarkable and powerful, perhaps, of any Australian — Williamson delivers an animated Wikipedia entry. We learn what he did, in a series of desultory sketches, but we learn almost nothing more about who he is. When the poster promises we need to “THINK AGAIN” about what we know about Rupert, that’s as trumped up as some of those Daily Telegraph front pages. Full review at Crikey theatre blog Curtain Call …

Is it anything like “The War Lord” – set in feudal times too – the main character lauded it over the country-side, and, through droit du seigneur, thinks he had the right to screw anything he liked, too?