Rudd has a last chance for a cornered-rat appeal

A telegram from the campaign trail, with breakfast TV and stale muffins and no-name MPs everywhere you turn. Our man on the trail is getting a little tired ... 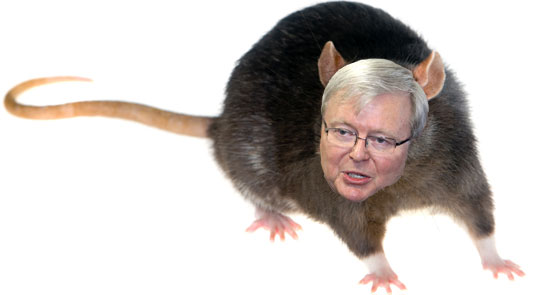 “Take a look at this.” On Sunrise, or Today, they’re guffawing over a Greens launch where The Bedroom Philosopher did a bandicoot dance with coloured hankies. Wake up in a breeze-block motel, turn on ABC TV, where the two Triolis are running the most boring debate ever between Graham Perrett and who? ‘Cept it’s not Trioli this morning, it’s Trioli in a blonde wig pretending to be someone else, “Bev”, her bubbly alter ego — it’s in her contract, and everyone turns a blind eye to it.

On RN Fran Kelly has found a grade 3 project by the next member for a seat the size of France somewhere: “You said you got an elephant stamp, didn’t you, but it was a zebra stamp, wasn’t it, minister, a zebra stamp?!” “I’m s-s-s-s-orry, I just wanted love. I resign.” “OK. let’s go to the agricultural prices.” Back to Sunrise, Today, and they’re cooking yams or something. It’s like touring a ward of Korsakoff’s victims, morning TV — they’re happy because they blasted their short-term memory.

Get up, eat the motel biscuit — not a metaphor — drink the little milks, check out, grab a notebook and go to see Senator Doofus of Blumpkin give an electronic scooter to the Pfftalicious Kiwanis and announce a $30,000 boost to address uncontrollable dribbling in New England or somewhere, such as it has become. So this is a brief telegram, on the last day of the penultimate week, when it looks like the Libs have it in the bag.

Not a huge victory, but a solid one, evidenced in every poll, and as we always say hedging bets, if they’re all wrong, this is a poll on the polls. Bob Ellis on his blog is doing sterling service pointing out the corner-cutting that Australian pollsters employ to shave costs — robocalls and landlines — and also the effect that up polls have on a compulsory voting polity: that you want to be with the winner, that it persuades people over, becomes self-fulfilling.

But there’s too many I think, for it to be other than a likely 52.5-47.5 split or thereabouts. But that the’s nature of “solid” victories in two-party preferred polling — it can still be turned around in the last week. The onus falls on Kevin Rudd, the launch speech on Sunday and the tone of the last week. What should he do? The obvious answer is to go in hard, to bring on the noise bring on the fear, the double whammy that maybe he should have done from the start.

‘These guys would have given you a recession in ’08, we saved the joint, look at the rest of the world, now look at their figures, they don’t add up, there are going to be huge cuts, an austerity program and a disaster. Wrecking the joint is what they do. Don’t let them scare you about manageable debt used for investment. Every family takes on debt at 500% of GDP. It’s called a mortgage. Ours is around 30% of GDP. Debt is investment. Which is what we needed in 1996-2007 and didn’t get.”

Which would be a tough sell, because it should have been done from the start and wasn’t, and Rudd doesn’t have the personality to do it, the cornered-rat style that Keating had. And everyone in Labor is running scared of the Anna Bligh example where a disaster became a wipeout by going in the wrong direction. And now I have to get in a car with Bob Katter and work the tablelands, and John Faine is chewing Abbott like a dog toy over Syria, and the Sunrise crew are braiding each others’ hair.

Be thankful for small mercies that the ‘Sunrise’ crew are distracted with hair braiding. Rather that than they attempt reporting.

Guy, I hope you’ve got a holiday planned, starting Sept 8. You’ll deserve it.

But never mind the polls – it’s the bookies that have me convinced.

This is my ‘take home’ from reading Nate Silver.

Gee, Bob Ellis! He was picking a narrow Labor win in the last NSW state election on the basis of Kristina Keneally, Carmel Tebbutt and Verity Firth being a trio of good lookers!