Kevin Rudd seems to be displaying a weird death rattle obsession with undeliverable promises. Plus other bites from the campaign.

Campaign reading. Remembering prime ministers past on the eve of their electoral defeats, Laura Tingle in the Financial Review writes of how they get a death rattle obsession with promises they must know they are never going to have to deliver, policies that are right off script. A certain unreality creeps in, she explains in “Rudd’s thought bubble is about to burst“:

“And now Kevin Rudd seems determined to let everyone know — in case they didn’t — that Labor is going to lose the election.

“It is not just that this week has seen the Labor campaign descend in to ‘thought bubble’ politics. It is that the thought bubbles have been so far off the message that Rudd needs to be delivering.

“So while the stated Labor strategy is to focus attention on Abbott and the question marks over Coalition policies — not just their cost but their equity and policy worth — Kevin has been off talking about high-speed trains, and moving Garden Island.”

Also in the Fin this morning is “Abbott’s fiscal discipline a fraud“, with Mark Latham displaying his serious side in concluding that while Labor will most likely lose seats on September 7, in one vital respect this doesn’t matter. It has already won the debate about the size and role of government because Abbott has emerged as a gold-plated welfarist.

“Politically, Labor has misread Abbott. It has tried to portray him as a cost-cutting fiend when, in truth, his greatest sin is profligacy. As a disciple of BA Santamaria, the Opposition Leader is an old-fashioned state paternalist, positioning government as a counterpoint to the excesses of free-market economics at one extreme and the growth of non-Western, non-Christian values at the other.”

Those among us with a morbid desire to witness political train wrecks will have been disappointed by this disciplined election campaign, but it won’t be long before the lid blows, warns Barrie Cassidy in “This is the calm before the political storm“. Within Labor it matters not that former prime minister Julia Gillard will be gone after the election, and perhaps Rudd as well.

“For the next few years at least, the party will nevertheless split between those always loyal to Gillard and those who ultimately backed Rudd.

“That divide will be just as bitter and probably more difficult to manage than the traditional left versus right battles of the past.”

For Opposition Leader Tony Abbott there will be challenges in government as well.

“For years, he has operated effectively as an opposition leader, creating a sense of chaos around the government, exploiting every policy and political error, while at the same time maintaining discipline in his own ranks.

“But in government, he will have to reconcile the contradictions between established Liberal principles and the indulgences of some of his policies.”

Our campaign honour board: Laura Tingle joins Ross Gittins and Tim Colebatch at the top of the list, and Barrie Cassidy makes his appearance.

Other views: blogs and tweets of note

“Hatred of politics (and a complicated bereavement)” Tad Tietze on the website for the journal Overland addresses what he describes as “the reasons for this rapid shift from partisan frenzy to sullen resignation on the Left”. The real problem for the Left, Tietze argues, is that we are seeing the eclipse of a century-long era institutionalisation of politics around a rigid Right/Left axis. He concludes:

“The Left’s lapse into a form of ‘plague on both their houses’ arguments is another phase of an unresolved grief reaction, in which a positive alternative cannot be imagined because there is not yet a coming to terms with the loss of the old institutions, let alone the possibilities of radical rupture that loss opens up. Whoever wins the election, the political order will remain unstable and open to challenge because of its weak social foundations. The question is whether we can take advantage of that reality or find ourselves stuck wishing it wasn’t happening.”

The battle of the photo opportunities. You didn’t need an opinion poll to tell you who dominated this last week of the election campaign. The pictures told the story, and it was team Abbott by a huge margin thanks largely to those photogenic daughters.

Campaign listening: BBC Radio Five Live. Depressed at the virtual absence of comment by our politicians on what action, if any, we and the rest of the world should take over the goings on in Syria, the House of Commons debate on the subject was my choice of radio listening this morning. What a change to hear a debate touching on war and peace rather than the one on who costed whose policies with what authority when.

The nightly television news. The first campaign venture into a school class room by Abbott was the evening photo fair for his side. 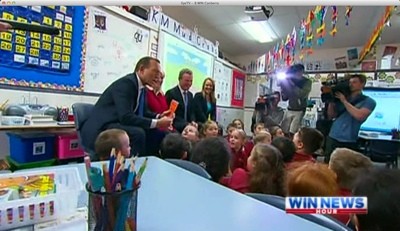 For Rudd, normally the campaign king of the kids, it was stern-faced politicians in suits. 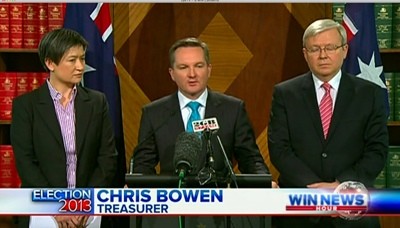 The daily election indicator. Labor 4.3%, Coalition 95.7%. Labor down 2.3 points to another low point for the year.

A test of psephological skill. We have the continuing opinion polls. There’s that daily Crikey Election Indicator. But now comes the definitive predictor as to what will happen on Saturday week. It’s time for the Crikey 2013 Election Contest, where the combined wisdom of our readers will reveal who will win how many of the 150 House of Representative sets.

And there will be one of our wonderful Crikey prize packs for the first reader to correctly predict the outcome. Enter HERE.

Thank you for mentioning the UK parliamentary debate on the government’s motion to support military action against Syria. The Government lost the vote. This is hugely significant and has widespread ramifications. Crikey is as guilty as the rest of the media in focusing on the endless trivia playing out in the guise of an election campaign and ignoring the profoundly important developments in the Middle East.