Although Julian Assange has claimed the WikiLeaks preference deal was an "administrative error", leaked emails reveal Assange was behind the controversial deal.

A damning internal email trail from inside the WikiLeaks Party has revealed that Ecuadorian Embassy recluse Julian Assange was intimately involved in the Senate preference debacle that led to the party’s implosion.

Leaked emails sent by Assange and obtained by Crikey lay bare the internal war that consumed the transparency advocates and show how the self-described “president” and “party leader” tried to railroad democratic processes and impose the will of a small clique of acolytes. There is no WikiLeaks leader or president — under its constitution the party is controlled by an 11-member council. 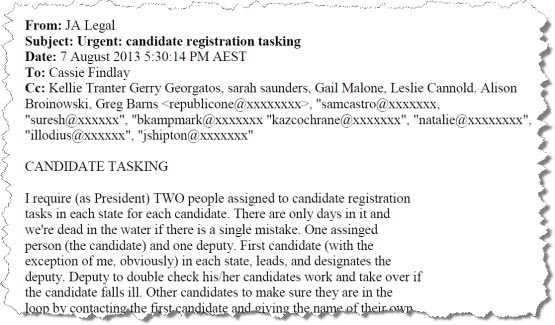 Under the subject line “NC micromanagement of preferences”, Assange, the lead Victorian Senate candidate, slammed the council and suggested it should become a rubber stamp for decisions taken by individual candidates:

“I am receiving unhappy sounds from the NC micromanaging preferences. I agree with that. I am unhappy about it too. The people with the most information, motivation and responsibility are the Candidates and their campaign teams. I have a fully booked schedule and do not have time to attend snap NC preference meetings. I know that the NC is well motivated and wants to help, but it is not helping.”

“Preference negotiations are the single most important factor now in winning the campain [sic] and are extremely dynammic [sic]. Bar a raid on the embassy, we will not win without them. A great deal of time is being spent on it. At any moment there may need to be a re-adjustment based on a party removing a proposal to us or a new party stepping forward. This may then require adjustment of other preference agreements.”

Assange then goes on to propose:

“… that I assess the proposed final negitotiations secured by the Candidates and their teams to ensure that none of our Canadidtates [sic] or their negotiators has at the last moment has become a stalking horse for another party or would be a PR disaster (the latter is unlikely because our Candidates want to win).”

WikiLeaks activist Samantha Castro, who has since stepped down from the national council, responded in savage fashion, calling the missive “bullshit”:

“This plan sounds undemocratic and disrespectful to the national council of which I thought Julian was an equal member not the a person who could override choices by issuing statements from afar while not attending any meetings (bar one that I am aware of) The council is trying to ensure the values of the party are not trodden on in pursuit of deals that have NOT been shown in any real way to clearly benefit us and instead completely compromise our values and risk alienating our base. This is bullshit.”

In the days leading up to the decision, Crikey showed how WikiLeaks could conceivably cut a deal with the micro-Right to improve Assange’s chances in Victoria, but this tactic wasn’t pursued. Instead, when group voting tickets were released two weeks ago, the party nonsensically preferenced WA Nationals candidate and former West Coast Eagles goal sneak David Wirrpanda ahead of the Greens’ Scott Ludlam in Western Australia, potentially denying the staunch Assange supporter victory. In New South Wales, WikiLeaks bizarrely went to the redneck Shooters and Fishers Party and the extremist anti-immigrant Australia First Party ahead of the Greens, Labor and the Coalition.

A marathon 12-hour meeting on the day before preferences were due to be lodged concluded with an official directive from campaign director Greg Barns, but in WA and NSW this was ignored. In a statement released after the snafu, the party blamed the mix-up on administrative errors and said it “unreservedly acknowledges that the errors made in GVTs have angered many supporters and members and the Party apologises for those errors.”

Dissidents who have since quit the party say the tilt towards unilateral decision-making and the ossification of control around Assange, his biological father, John Shipton, and Barns left them devastated.

An earlier Assange email under the heading “CANDIDATE TASKING” shows his level of micromanagement of technical tasks:

“I require (as President) TWO people assigned to candidate registration tasks in each state for each candidate. There are only days in it and we’re dead in the water if there is a single mistake.”

In an interview with the ABC after the shit hit the fan, Assange twice claimed to be “party leader” and said couldn’t rescue the problems in Australia because he was too busy “saving a young man’s [Bradley — now Chelsea — Manning’s] life.”

Wirrpanda kicked a few goals in his career but was much better known as a backman.

The author has joined in the anti-Assange war-drive and will soon be rewarded with a Political Exchange tour of the United States. Shame.

Anyone who doesn’t want an Abbott Goverrnment to control the Senate with the help of right wing fringe groups should ignore Wikileaks and vote ALP or Green above the line. Alternatively they could vote below the line and number candidates as they see fit. But with 100+ candidates on a metre wide ballot paper and names in almost unreadable fine print in large states, the risk of an informal vote is high.

Bottom line – vote Wikileaks and risk handing the Senate to Abbott, possibly with the support of far right fringe candidates who, for example, want to allow shooters in National parks or who believe that bush fires are God’s punishment for allowing abortion.

I thought the best part about this was the word ‘assinged’. Is that an elision for when you’ve been assigned by Assange?

Assange has done a poor job here. It was pretty obvious that his strengths don’t lie in consensual decision-making, so don’t know why he bothered setting up a democratic constitution if he just wanted to be a top dog.
As far as I’m concerned he’s already contributed more than most to democracy, so while I think his behaviour here is shitty, I don’t think that in any way detracts from what he has given the world.