On the trail with Craig Thomson, the David of Dobell

Facing 173 criminal charges over the alleged misuse of credit cards and other matters, Craig Thomson is defiantly contesting a seat he cannot win. Is he a little mad, in denial ... or looking to make a few dollars? 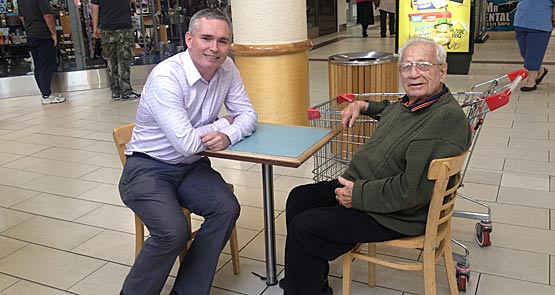 Why on earth is controversial MP Craig Thomson running again for the seat of Dobell? It can’t be because he is going to win (he’s not), and it’s not because the ALP wants him to (he resigned). Could it be because he stands to make about $100,000 by standing as an independent candidate?

The former union official is facing 173 criminal charges over the alleged misuse of credit cards and a raft of other inquiries, but has always vehemently protested his innocence. Crikey travelled to Wyong, on the New South Wales central coast, to find out what makes him tick.

First, the money. Under the Australian Electoral Commission’s election funding laws, all parties or candidates that receive more than 4% of first preferences receive $2.31 per vote. Thomson is predicted to receive around 7% of the primary vote. Additionally, given that Thomson is running, he stands to gain up to six months’ pay in a resettlement allowance that can be paid to MPs who are defeated at an election (Thomson told Fairfax he was entitled to a similar payment regardless of whether he ran as an ALP candidate or independent). Thomson’s base salary is $190,000.

So is giving six figures to Thomson a good use of taxpayers’ money, or should it have gone to the Leadbeater’s possum?

We met at the Lake Haven Shopping Centre in classic battler territory. He and a local volunteer, Kayla, were doing a slow walk through the centre, pressing the flesh. Trailing behind, I got  a great view of the locals’ reactions. As they passed him many did double-takes and, turning to their companions, said “isn’t that Craig Thomson?”. Then they shrugged their shoulders, grinned and walked on. As he says, ruefully: “Name recognition is not an issue.”

A handful of people did talk to him — he has been an MP since 2007 — and proffer their support. Later, over a frothy coffee at Muffin Break, I asked him if he thought he could win. He said winning the seat would be like “GWS winning the AFL” or the Mariners winning the league. Mystified, I tried to translate this into something I would understand. “Do you mean it’s like David and Goliath?” He nodded.

It wasn’t until I asked him about his policies that we got into a kind of parallel universe, or what The Sydney Morning Herald calls “Craig’s World”. Faced with the sort of evidence that might stump a lesser person — such as his signature on credit card vouchers — he has always said, “it wasn’t me”. He told Fair Work Australia that he won his defamation case against the Herald, when in fact he withdrew his suit and paid costs.

In Craig’s World, Thomson told me he opposed the ALP policy of imposing fringe benefits tax on company cars, because it affected a lot of “low-paid health workers” (these are, of course, the very people it is alleged he misused funds from). The Central Coast is full of aged-care facilities, and workers often get a modest company car as part of their salary package, he says.

In the real world, the New-Zealand born MP was charged last year with misappropriating hundreds of thousands of dollars from the Health Services Union when he was the national secretary from 2002 to 2007.  Fair Work Australia is also investigating alleged use of union credit cards to pay for prostitutes, including one from an agency called Miss Behaving. Fair Work alleges Thomson withdrew about $100,000 in cash payments, which the union says was unauthorised.

“I couldn’t do the job or think about standing again if it wasn’t for the support of the local community.”

The issue is not that Thomson allegedly used prostitutes or watched dirty movies — if we locked up every man who’d been to Miss Behaving, the jails would be fuller than Villawood. The problem is that if it happened — and the case is still before the courts — it allegedly was not his money to spend.

But Thomson says he is the victim of a conspiracy to denigrate him. All this became a giant headache for former prime minister Julia Gillard when it came out that the NSW Labor Party had paid $350,000 towards Thomson’s legal fees to stop him from going bankrupt, which would have forced him to stand down and triggered a byelection.

Under pressure, Thomson resigned from the ALP last year and sat on the crossbench as an independent. Fellow independent MP Tony Windsor gave him some good advice, recommending that independents do face-to-face campaigning, as phone polling favoured the two major parties.

Thomson, a thrice-married father of two, says he is now broke, and that generous friends are helping him with legal fees. Thomson told me his supporters were paying for the cost of the campaigning, including signs and T-shirts. He is recycling old election posters by putting a new sticker across the Labor references and putting them in people’s front yards, as the ones on light poles keep being torn down. “I can’t afford to lose too many,” he said.

He has also been able to use the sitting member’s communications entitlements to pay for his printed materials, “as long as you depoliticise them”.

The issues he was campaigning on included opposition to a coal mine at nearby Wallarah on the grounds that it will disrupt the aquifer (his T-shirts say “Water Not Coal”) and facilities at the Wyong Hospital, although these are both state issues, not federal. He also points proudly to his support of surf clubs (a local issue, surely, although Opposition Leader and surf club enthusiast Tony Abbott may change that).

The HSU charges are getting more airplay in the capital cities than in Wyong, Thomson reckons. “By far the majority of people say, ‘We don’t actually care what happened before you were a member here. We will judge you on your record’,” he said.

Following the publication of a photograph of Thomson having a beer with Deputy Prime Minister Anthony Albanese, there has been renewed speculation that the ALP is continuing to support him in exchange for preferences; the Labor Party denies this. A preference deal would be irrelevant, though, as Liberal Karen McNamara is on track to easily win the seat.

Asked yesterday about the effect on his young family, Thomson looked emotional, saying that things have been “tough, because it has been going on for so long. But I couldn’t do the job or think about standing again if it wasn’t for the support of the local community.”