The Age has asked its readers whether a military intervention in Syria is justified, and now it is asking the real questions: are cats or dogs better?

Deputies take over the airwaves. Deputy PM Anthony Albanese, Deputy Opposition Leader Julie Bishop and Deputy Greens Leader Adam Bandt are guest-programming ABC’s music video show Rage tomorrow night, as part of a last-ditch effort to: a) prove politicians are human beings who enjoy popular music; and b) show they’re down with the youth of today.

Bishop has the most eclectic playlist (Red Hot Chili Peppers, Beyonce, The Easybeats), Bandt’s is befitting of an inner-Melbourne hipster (Arcade Fire,  My Bloody Valentine, MGMT) and Albo has surprisingly good taste (PJ Harvey, The Clash, The Pixies). The full playlist will be up at the Rage website sometime this afternoon. — Sophie Benjamin

The Age asking tough questions. Melbourne’s former broadsheet The Age is big on interactivity, asking its readers hard-hitting questions about the day’s news. Or not. Well, it is Friday …

Exclusive watch. There are a whopping 16 “exclusive” stories in The Australian today, including a preview of a speech Nationals leader Warren Truss is set to make today about aviation safety and a report that the Western Australian state Nationals support a conscience vote on gay marriage, in opposition to Nationals federal leader Barnaby Joyce. The party moved a motion to allow a conscience vote at its state conference — on August 2-4.

Video of the day. The Australian Sex Party has put out what we think is the best political ad of the campaign. The ad says there’s too much f-cking going on — in that too many people are being f-cked over …

Front page of the day. Rupert Murdoch’s tabloids are not shy about letting their views be known the world over. Today’s effort comes from the New York Post, now missing Col Allan, calling for the assassination of the leader of a sovereign nation. 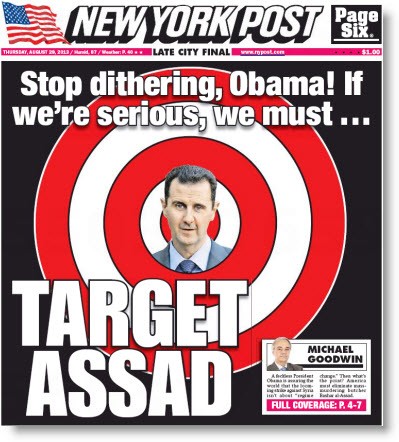 re: Exclusive watch. Since when has barnaby been the National’s federal leader. He isn’t even deputy at the moment