When Americans wake up from the dream, there’s much to do on race

It's been 50 years since Martin Luther King's iconic speech, but the grim reality is that not much has changed for African-Americans since then. 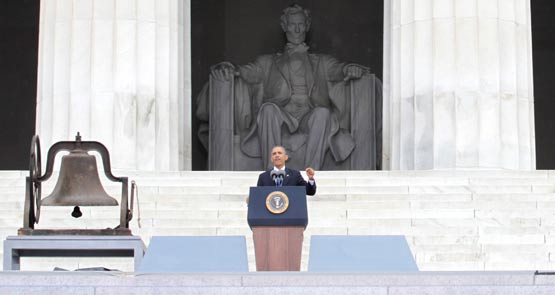 Today should have been a moment of celebration; one to reflect on the huge strides taken in the half-century since Martin Luther King delivered his momentous “I have a dream” speech. Fifty years to the day, it was Barack Obama, the first African-American President, himself one of the great modern orators, standing on the steps of the Lincoln Memorial celebrating this anniversary. His 30-minute speech today was typically eloquent.

Yet for all the advances in equality, and the movement forward from the dark days of segregation, there is a deep, sinister undercurrent in the US right now. Spend any length of time here and it’s plainly obvious: the country is sharply divided. This bitter discord has much to do with race and in particular, Obama.

Many Democrats believe that although President Obama was elected in 2008 to a majority superior to Ronald Reagan in 1980, most of his enemies, driven by a deep-seated hatred of the concept of a black president, determined that he achieves little of substance.

Reverend Al Sharpton called on “gays, women in the workplace, immigrants and others facing discrimination” to keep fighting for equality. MSNBC also encouraged viewers to tweet positive messages with the hashtag #advancingthedream.

Chris Matthews, the Democrats-favouring MSNBC host, bluntly declared racism remains as persistent as it was in 1963. Today it’s merely unspoken, hinted at by insults from the likes of Donald Trump and Texan senator Ted Cruz. At least, he says, back in the day they were honest about racism.

“Getting the president to show his birth papers was embarrassing and racist,” Matthews said. “They basically pulled him out of his car and asked to see his licence.”

African-Americans continue to face discrimination on the street, in the workplace and even in their neighbourhoods. Indeed, as a group they have had little to celebrate in 2013. A disproportionate number collect food stamps to feed their family. Republicans have spent much of the year, when not attempting to repeal Obama’s Affordable Health Care Act, drastically reducing the money allocated for assistance. “Stop and frisk”, New York mayor Michael Bloomberg’s spectacularly controversial police tactic, clearly targets minorities — particularly blacks.

The Supreme Court’s Voting Rights Act decision, driven by rancorous red states eager to shut out minorities who mostly vote Democrat, was a devastating blow. It repealed key planks that had been set up in 1965 to root out racial discrimination in electoral voting.

Then there was the trial of George Zimmerman, the man who was acquitted of murder in the shooting of unarmed Miami teenager Trayvon Martin.  Among the most-pointed sign at post-verdict protests around the country: “stop killing our kids”.

Zimmerman, whose wife received a year’s probation yesterday owing to perjury charges, remains tone deaf and insensitive. Last week he visited a Florida gun factory. Just as gallingly, his lawyer, although representing him pro bono, has filed to have the state pay up to $300,000 in legal expenses.

In cities such as New York and Miami, where minorities now outnumber whites, things are not what they seem. Among Latinos and African Americans, there are brisk differences. They bristle at the comparison illegal immigrants make to their struggles and their history of slavery. For many of them, it is deeply offensive.

So Obama is under siege on numerous fronts. He’s been at war with his political enemies from the moment he set foot in the Oval Office, but his constituency has turned somewhat now, too. They’re frustrated by the lack of progress on race. They’re also infuriated that besides a few notable exceptions, he has barely referred to it during his presidency.

There have been gains in the House of Representatives, but only three African American senators and two state governors have been elected nationally since 1950.

“This is not an easy topic for him to address,” Chris Matthews said. “But he needs to be more forceful about race.”

Matthews added that the trouble for Obama is that those who do believe in him are now pouting. “And pouting,” he said, “is not a good political movement.”

The US has a history of slavery and seggregation in which disadvantage and exploitation was clearly a one-to-one consequence of race. You couldn’t be a rich slave, being rich wouldn’t help you get legal rights in the south much later. But perhaps because of this, the US seems to code all disadvantage as being a direct result of race and I think it misses the bigger problem of poverty, poor services, poor education etc. These things do affect black people more but they are a consequence of government spending decisins, tax policies, a medieval minimum wage structure, healthcare costs etc which are not directly race-related but which burden some races far more. But not exclusively. Try talking to a white worker in a meat packing plant about entitlement. Until they fix the fact that the only route to freedom for anyone in the US is to be part of the 20% and hopefully part of the 1%, the colour of your credit card is going to say a lot more about your options than that of your skin.