The public and the media are suffering from election fatigue, and it seems the pollies are too.

A test of psephological skill. We have the continuing opinion polls. There’s that daily Crikey Election Indicator. But now comes the definitive predictor as to what will happen on Saturday week. It’s time for the Crikey 2013 Election Contest where the combined wisdom of our readers reveals who will win how many of the 150 House of Representative sets. 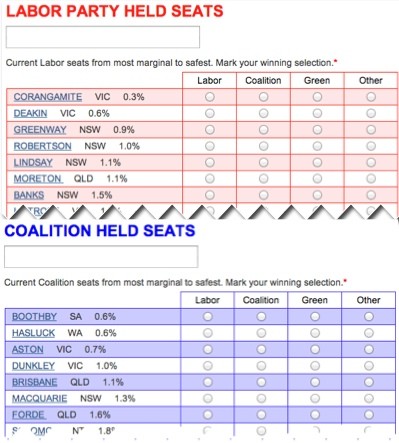 And there will be one of our wonderful Crikey prize packs for the first reader to correctly predict the outcome. Enter HERE.

Campaign reading. If you want a run-down on who said what of significance in last night’s debate then Rudd, Abbott freelance on policy by AAP senior political writer Paul Osborne provides it. As published on the website of The West Australian, Osborne noted where Prime Minister Kevin Rudd and Opposition Leader Tony Abbott appear to have contradicted their own policies, under pressure from voters who quizzed them.

The prime minister contradicted Labor policy on superannuation by appearing to flag further reform, despite Labor promising a five-year freeze on any changes. On foreign investment he flagged his preference for joint ventures involving Australian and overseas firms when it came to rural land which went further than the stated support for a register of foreign ownership of agriculture.

How could I fail to include Economists cut down Coalition’s plan to boost growth on my worth-reading list after seeing this tweet?

The Coalition has been accused of overselling its economic plan by promising a “stimulus” next year from pension increases and tax cuts, as economists warn that it would take much bigger reforms to lift economic growth.

Experts poured cold water on one of the Coalition’s central claims yesterday after Treasury spokesman Joe Hockey argued the personal benefits flowing next year would act as a stimulus.

The Coalition has identified $31.6 billion in savings but refused to release the independent findings to back its estimates, relying instead on three advisers to claim its figures are robust.

An indie for Indi: the campaign to unseat Sophie Mirabella — Oliver Milman of The Guardian writes how a conservative independent candidate Cathy McGowan’s diverse band of volunteers is committed and refreshingly cynicism-free as they attempt to unseat the local member for Indi, the Coalition’s Sophie Mirabella. They are going about it with disarming charm, rather than fire and brimstone.

The Nationals for some reason tend to be the forgotten party in election campaign reporting but Lauren Wilson redresses the balance a little with Wombat trail no easy run for Nats in this morning’s Australian. An informative look at the present difficulties of combatting the Katters, Palmers and independents in the bush and the difficulties to come if and when the junior member of a coalition government. 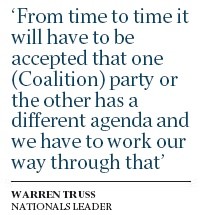 And another one of our negative points on the honour board goes this morning to Paul Sheehan for his Labor pulls out the race card in bid to win over Chinese who seems to think there is something improper in Labor daring to promote a Chinese speaking candidate in an electorate with a sizeable Chinese community as having Chinese connections.

Not that Paul Sheehan has any chance of catching Gemma Jones at the foot of our board. The Sydney Daily Telegraph scores again for this page one effort: 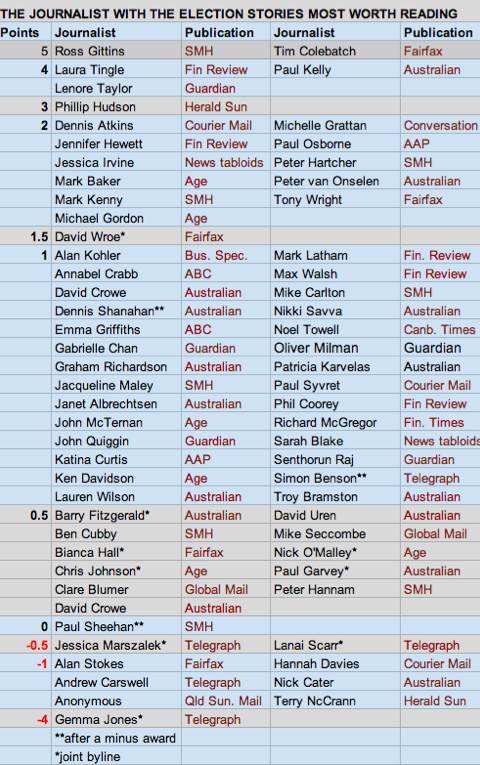 Other views: blogs and tweets of note to help put campaign coverage in perspective. From a blog note by Ezra Klein on Mark Leibovich’s book This Town about members of the political-communications complex:

The bad news about This Town is that the political-communications complex is kind of an awful place. The good news is that it really doesn’t matter.

The subject of those words might be Washington but Canberra is no different. Worth thinking about as you settle down to watch Insiders, The Bolt Report, Meet the Press and most commentary on Fox News this weekend as if they were somehow important in the political scheme of things.

A letter writer to the Sydney Morning Herald: 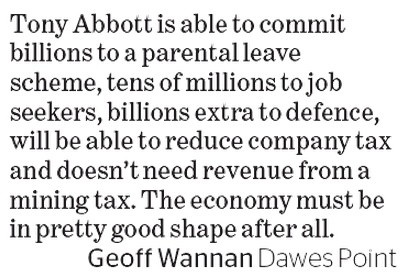 Grog’s Gamut considers the Debate Double Header of Abbott v Rudd last night and Hockey v Bowen earlier in the day. The Treasurer’s debate he thought didn’t really reveal anything. That of the Leaders actually contained some new policy. But the Greg Jericho verdict was that the debates were irrelevant. Watched only by tragics and rusted on voters.

Campaign listening: ABC Melbourne 774. Red Symons, entertains the people of Melbourne — the most liveable city in the world as he reminded listeners a couple of times — over breakfast without too big a dose of politics. A report on overnight Twitter traffic noted that the economy was the subject getting Australians most excited about the debate before turning to a university college in Sweden being shut down because of hazing and the more intellectual subject of Swedes finding a new element for the periodic table they are calling Uppsalite after the city that is not as liveable as Melbourne.

And just before the 7am news came the kind of promotion that suggested there would soon be  good time to go and make the tea and toast. After the news, Symons almost warned, “they’re making me talk to Kevin Rudd. I don’t want to. I have to.”

Followed after the news by this less than enthusiastic welcome to the Prime Minister: “And against my better judgment, on the line is Kevin Rudd.” That reticence, the presenter quickly added as if remembering his manners, was because “if I speak to you I have to speak to the other bloke”. Then, as if forgetting his manners, the rather rude first question about whether the PM wanted a question or was he just going to speak.

Little wonder after an introduction with that kind of warmth that it was a somewhat quiet and subdued Kevin Rudd on the line as the pair stumbled through a review of the previous night’s debate. How did it go met with a that’s for the people to decide response although there was a prime ministerial chuckle at the suggestion that such appearances must be like a band having to make a store appearance.

The Prime Minister managed to sneak in his favourite line about how the focus should be on what Tony Abbott would actually do to your job, your school and your hospital if the actually became Prime Minister. Overall there was nothing for listeners to learn apart from Kevin Rudd having the sense to know when he was a reluctant invitee and thus kept his answers short.

The nightly television news. If you are going to visit a factory for the daily photo opportunity then make it an interesting factory. And what could be more appealing to most people — especially a travelling press pack — than a chocolate factory? The salivating at the sight of all those tasty morsels on the television screen would surely have blocked out any skepticism about the wisdom of giving $16 million to a foreign-owned multi-national.