Hockey ditches austerity for a fiscal unity ticket with ALP

Despite the Coalition's rhetoric, it has embraced the same fiscal policy as Labor, as yesterday's treasurers' debate showed. Bernard Keane and Glenn Dyer offer their take. 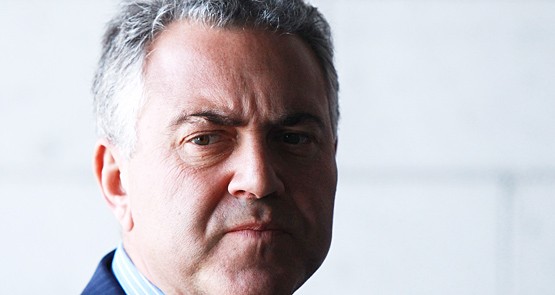 While economic discussion is for the moment given over to the credibility or otherwise of the Coalition’s savings measures, there’s a more important point that emerged from yesterday debate between Treasurer Chris Bowen and his shadow Joe Hockey. Confronted with the reality of governing, the Coalition has now signed up fully to Labor’s fiscal policy (a fiscal policy, by the way, that Labor itself only embraced last December).

In Hockey’s prepared remarks at the opening and closing of the debate, he referred to the need for “appropriate stimulus”, which would be delivered by the next round of carbon price compensation — sans the carbon price, of course — on July 1 next year, and then by the Coalition’s $10 billion paid parental leave scheme in 2015.

“Appropriate stimulus” was a most interesting and deliberate choice of words from Hockey. Not merely is the putative Treasurer not intending to pursue austerity of any kind, despite Labor’s scare campaign, he actually thinks the economy needs a little fiscal push (it would indeed be little; neither compensation nor PPL will provide much in the way of significant addition to demand). But Hockey also specifically stated he believes monetary policy is nearing the end of its capacity to provide stimulus — i.e. with interest rates at historic lows, the RBA doesn’t have much more ammunition left to fire, despite the economy travelling well below-trend.

Hockey had some twists and turns on the relationship between monetary policy and fiscal policy, mostly driven by his exasperation that Labor managed to grow the economy, keep unemployment low and manage a mining boom while keeping inflation and interest rates low, a feat that proved beyond the Howard government. But faced with the reality of being in government after September 7, Hockey has come around to the idea that a rush back to surplus isn’t too flash an idea in a weak economy, and that if stimulus is needed, it’s probably got to be fiscal rather than monetary.

And the interesting point about the $31 billion list of savings Hockey and Andrew Robb produced yesterday was less whether they added up or their overall impact (“slightly better than Labor”, according to Hockey, continuing the fiscal unity ticket) than where they were targeted — primarily at business. Out went the instant asset write-off and other measures funded by the mining tax. Out went industry assistance for the carbon price (the logic of keeping compensation for the punters but not for business isn’t clear, but never mind). And out went Automotive Transformation Scheme funding.

The problem is, the Reserve Bank and Treasury are searching high and low for every bit of of new investment to replace the fading embers of the mining resource boom. Politically it makes sense to hit small and medium business, rather than voters, by saving $900 million through axing a measure like the tax loss carry-back. And, yes, it’s not funded by the mining tax, so it’s a straight drain on the budget. But it’s a peculiar measure from the side of politics that talks about restoring business confidence.

“The parties’ spending plans and their costings are important, but they are not vital.”

Yesterday saw another weak economic report, showing the recent growth in housing construction levelling off and engineering construction continuing to decline. This underlines the growth quandary for the government, business, Treasury and the Reserve Bank: it’s still not very obvious where growth will come from in the next year to 18 months, and as a consequence, where necessary tax revenue growth is going to be generated. In fact it’s more of the same; growth under or just nudging trend (3 — 3.25% a year) and revenue growth continually under pressure.

Next Tuesday we have the RBA’s September board meeting (don’t expect another rate cut), and the next day we get the June quarter’s national accounts and growth for the 2012-13 financial year. The GDP figures could be a touch better than expected, but the remainder of 2013-14 is full of unknowns. Inflation remains under control (though if oil surges to $150 a barrel because of the situation in Syria, then that will boost oil and petrol prices, and inflation). But it will also drag up commodity prices. Because Australia is a significant commodity exporter, and an emerging LNG exporter, that could provide a temporary boost to the trade account and government revenues.

Then there’s the US Fed meeting on September 16-17 and the start to the ending of quantitative easing. That could hit the dollar’s value, although the sell-off in some emerging markets and the danger of spillover into financial markets might force the Fed to delay when it starts to end its quantitative easing.

None of this international context was covered by Hockey or Bowen. The parties’ spending plans and their costings are important, but they are not vital. Meeting them, under or overshooting on revenue and spending predictions/forecasts will depend on factors outside the control of these politicians.

What you can control is your own spending, and where it is directed. While the Coalition is proposing to withdraw support for business, it is imposing a levy to fund Abbott’s paid parental leave scheme that, as Bowen correctly noted, Hockey almost certainly opposes but has to publicly back as a stimulus measure for 2015 (rather than a participation measure). It was a political jab, but well-made: all treasurers and their leaders have tensions over spending, and if Hockey couldn’t contain Abbott in opposition over something as expensive as PPL, how does that augur for the Coalition in government?

There are many factors a government can’t control — the Aussie dollar, the world economy, commodity prices — but you can control your own spending, unless you have an undisciplined prime minister. And there’s little indication that Abbott, disliked among his Howard government colleagues for the way Howard indulged his poorly thought-out spending proposals, has the requisite discipline.

Hockey’s proposals to cut company tax breaks are most heartening, and presumably he got them cleared by at least Abbott if not shadow cabinet before announcing them. So I wouldn’t be so pessimistic about a big spending Abbott.

This is “pre-election” spiel?

Newman made all the same promises before he was elected and he started gutting the public service anyway. The LNP have form, don’t trust them.

Take a look at what the Barnett government is doing in WA. Many promises broken and the cuts are starting to come.

Since the opposition are going with NDIS, the budget cuts , Education reform and all the other policies of this “government in crisis” it begs the questions
What crisis and

Why bother with the opposition when we can have the real policy producing party?