Campaign scorecard: Coalition wields budget scalpel, but is it enough?

Crikey asks the sharpest political commentators which leader got the best of the campaigning day yesterday, plus we track where the leaders are and what cash promises they’ve made

Bernard Keane, Crikey Canberra correspondent: I didn’t think Kevin Rudd won last night’s debate as convincingly as most did. Most worms (but not the Seven Network’s) suggested it was a solid performance, but Tony Abbott’s paid parental leave scheme continues to haunt him. It fascinates me that, three years on, voters still solidly prefer Labor’s low-budget PPL scheme to Abbott’s cash-for-everyone extravaganza, proving that you CAN be too unsubtle in appealing to voters’ greed. A narrow win for Rudd.

Richard Farmer, Crikey election analyst: Because most people were not actually watching last night’s leaders’ debate, the principal influence is what their peers who did watch tell them, which is influenced by the judgement of things like worms and what television, radio and newspapers tell them. I’ll go with the consensus view that Labor won the day, but not by much.

John Connolly, founder of John Connolly and Partners public relations firm: What better place for a debate about this country’s future than Rooty Hill RSL? A palace built on taxing the poor where neither candidate would be normally seen dead in, led to The Australian’s front page pic of Tony, Kevvy and a swingy talking a selfie. Thank god we have these two protecting our country against invasions, whether they be from middle-class Iranians or middle-class multinationals trying to buy our farming land. Clive Palmer sounded positively sane on Melbourne radio! Gold to Rudd, silver to Palmer, lead to the rest of us.

Nick Economou, lecturer in the School of Political and Social Inquiry, Monash University: The Coalition wins again. Hockey softens his side’s approach to the surplus and leaves Labor looking like economic ideologues. To ram home the advantage as part of his proposed savings, Hockey then sounds the death knell for all the enviro-palava Labor attached to its hated carbon tax. This is going to be a landslide.

John Hewson, former Liberal Party leader: The debate was better because the questions were more direct. However, both Rudd and Abbott are still seen more as actors delivering their lines, seeking audience approval, rather than as passionately committed to what they promise to deliver. Abbott is being over-cautious and is still very disciplined, which I guess is all he needs to be, to win. Rudd is increasingly showing the pressure, especially with his longer-term aspirations for a low-tax economy in northern Australia, a very fast train and moving the naval headquarters. Rudd dominated possession last night, but didn’t score as well as he needed to avoid further slippage in the polls. The final days may see even more policy being made on the run.

It was the day of the long knives for the Coalition yesterday as they released bare-bones costings (don’t look too hard for details) on a raft of cuts. The list covers more than $30 billion in savings, and the Coalition also quietly committed to carry out $10.5 billion in Labor’s savings, which were announced on August 2. The Coalition complained about those changes at the time (especially the $5.8 billion hike in the smoking tax), but have picked them up nonetheless.

Many of the cuts related to items tied to Labor’s mining and carbon taxes, which the opposition would scrap. We’ve plugged every one of the Coalition’s cuts (including the ones that were Labor’s idea) into our online Cash Tracker. Here are some:

The Coalition has also made some spending promises:

Labor left all the budget action with the Coalition. So where does that leave our major parties? Here is what our Cash Tracker looked like before the Coalition’s announcements yesterday (this site shows the net result of the spends and savings made since August 2):

And here’s what the Cash Tracker looks like now:

We’ve had plenty of interest from readers on the Cash Tracker. To help you read it, be aware that we’ve listed every spend and save made by the major parties since August 2. If a cash promise was made before then, we’re inserting it in the Cash Tracker when it gets re-announced or detailed. Some major promises are uncosted; the leaders won’t even hint at the price tag (for example, Kevin Rudd’s plan to shift a naval base north). We’ve put those items in at “tbc” — and to those readers who want us to estimate what it would cost, we’re not game. Other readers have questioned some of the numbers, which come from the parties themselves (sometimes via the Parliamentary Budget Office). You’re absolutely right; questions should be asked about the accuracy of the numbers. But we have to work with what the parties are putting forward. Faute de mieux!

Kevin Rudd: Following on from last night’s leaders’ debate with Tony Abbott in Sydney (we heard the Rudd press bus broke down and was jump-started by Abbott’s bus), Rudd headed to Canberra for briefings on Syria. He’s off to Melbourne today to announce the fast-tracking of naval supply ships. Set your alarm for Monday night — KRudd will appear on the ABC’s Q&A.

Tony Abbott: The Opposition Leader is in western Sydney this morning, where he met Homebush netballers and spoke at a school. Meanwhile, the man who might be our next deputy PM (Warren Truss — google him) is speaking at the National Press Club.

Christine Milne: The Greens leader is in heartland Tasmania, visiting the Pontville Detention Centre (which has been housing young asylum seekers), then launching the Tassie Greens campaign in Hobart. Milne retweeted this pic of a high-vis Leadbeater’s possum (an endangered species which lives mainly in Victoria’s old-growth forests — its survival is a political issue): 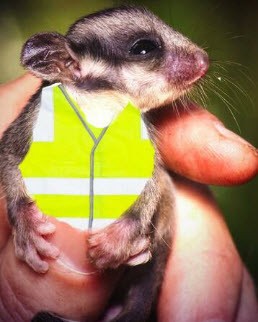 September 7 is not just about celebrating democracy, it’s also about a sausage in bread. The handy website Snagvotes lists barbecues, cake stalls and book rummages at polling booths:

Ah, Bob Katter. He either makes no sense whatsoever, or cuts through like a prophet. Here he is wondering where Kevin Rudd’s sudden anxiety about foreign investment in agricultural land came from (an anxiety not to be found in Labor’s policies to date, yet aired during the leaders’ debate in response to an impassioned questioner) …

Is it not spending and saving? Whence spend and save? Trendy?

With Wall To Wall Liberals in prospect, right across the continent surely the projected sequential ballet duets and more between Abbott and his entrenched State Liberal counterparts is more intriguing and more newsworthy?
Anything? before the “real” voters get their “real” say at the “real” election?