Out beyond the Labor strongholds, Liberal MP Dan Tehan is hitting the highways to maintain his healthy margin in the Victorian seat Wannon. Crikey went along for the ride. 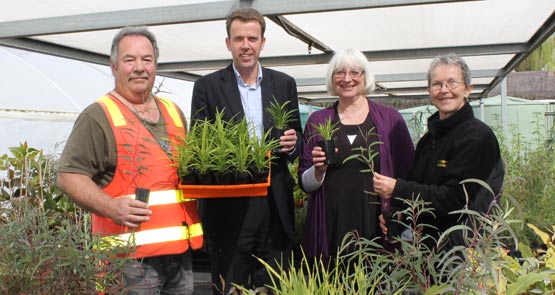 Heading west from Melbourne, you’d be forgiven for thinking Labor’s disconnect with the voting public wasn’t quite as serious as Mark Textor likes to make out. The deep red divisions of Gellibrand, Maribyrnong, Gorton, Lalor and Ballarat all flash by, destined to reside in Labor’s column whatever catastrophe befalls Kevin Rudd on September 7.

But plant your foot for long enough and the mood starts to turn, the commuter belt finally giving way to the wind farms of Waubra, an iron curtain of fog swirling down from the entrails of the Great Dividing Range at the far eastern edge of the massive, rural and usually safe Liberal seat of Wannon. This is Malcolm Fraser’s old blue-chip hunting ground, still home to an entrenched squattocracy, several medium-sized towns and big and small agriculture, all feeling the heat from the deadly dyad of the high dollar and global warming.

It’s here Crikey met first-term MP Dan Tehan, a laconic 45-year-old Liberal father of five who’s been bunkered down overnight in Avoca, a charming gold rush-era town, population 900. Tehan lives two hours away in Hamilton, his mud-smeared Ford Territory attesting to a relentless campaign criss-crossing 32,047 square kilometers, or 15% of Victoria, all the way to the Twelve Apostles and west to the South Australian border.

A 7.3% margin has been eroded by 1.6 points after the inclusion of disadvantaged Maryborough in Steve Gibbons’ old seat of Bendigo and the loss of Stawell to Mallee. The Libs might still have it in the bag, but there’s always hands to shake and a legacy to uphold.

We trek from shop to shop, Tehan re-introducing himself in a measured bush brogue: hairdresser Marg gives a progress report on the local Liberal branch; butcher Duane raises “ridiculous” apprentice wages and says an irrigation pipeline should be built from Queensland; Ron and Jenny from the newsagency tell how they had to sack their paper boys after Labor mandated a minimum three-hour shift for casual workers.

The former Fran Bailey chief-of-staff isn’t afraid to arc up in parliament to defend his constituents. When floods devastated the region in 2011, Tehan named insurer AAMI in federal parliament for failing to stump up cash for deluged policyholders. And in a fiery smackdown in the Federation Chamber, he sledged the banks and the government for failing to come to the aid of farmers in “these difficult times”. Not exactly the scorched earth approach of the Institute of Public Affairs, but then again Tehan’s never really rolled with the wingnuts.

It’s on Ron’s other issue, cheap New Zealand apple imports, that the central contradiction of rural Liberals raises its head. While the south-west sheep stations of yore have tailed off, agriculture still makes up 20% of the area’s economic activity. Ron reckons free-trade is all well and good but if another country were to apply subsidies Australia should “put the walls up”.

Tehan nods, but his solution is to improve access to foreign markets — a deal to get the region’s milk, that makes up 25% of Australia’s output, into Japan at a competitive price is close, he says. But as bitter enemies the Nats know, real penetration is often denied or stripped back, making a mockery of the disaggregated market theory supposedly at globalisation’s core. You get the feeling issues like this tear Tehan up as economic orthodoxy collides head on with mounting failures and farmer suicides.

Tehan grew up on a farm and did two years at Mansfield High before moving to Xavier College for some Jesuit life lessons in 1982. It was a purple patch for the Hawthorn campus that would produce Bill Shorten, state Labor MP Luke Donnellan and Daily Telegraph chief political reporter Simon Benson in quick succession. His Liberal lineage is impeccable: mum Marie was health minister in Jeff Kennett’s Victorian government and introduced the case-mix funding system that would eventually be adopted by the federal government; she died in 2004 after being tragically struck down with Creutzfeldt-Jakob disease. Dad Jim is a local identity in Nagambie, in Sharman Stone’s ultra-safe seat of Murray.

“The issues out here are roads, farms and mobile black spots. But travel further east and the Blundstones bluster turns skew-if.”

Despite the lineage, Tehan occasionally has to trot out his rural bona-fides to convince locals he isn’t from the city. In a 2009 preselection battle he managed to beat out a stellar field but not before being branded “Melbourne-based”, the ultimate insult among rural Libs. Tehan took leave from a gig as deputy director of the state party at Exhibition Street and ended up triumphing against local businessman Stephen Mitchell in the last round of voting. His major backing came from Denis Napthine, whose state electorate overlaps Tehan’s, but it was the branch members with 90% of the vote that got him over the line.

Tehan’s bush telegraph reception is now crystal clear; the Avoca motel’s owners turn out to be the parents of a Port Campbell woman he accompanied last year to agitate for a national framework for search and rescue dogs. And sole local copper Mick is part of a well-known family with relatives across the district.

The issues out here are roads, farms and mobile black spots. But travel further east and the Blundstones bluster turns skew-if.

“Welcome to the town of the dole bludgers,” sneers Tim, a local Elders rep, after Tehan announces in the main street of down-at-heel Maryborough $100,000 for local CCTV cameras at the urging of the police and small business sick of break-ins and vandalism.

We’ve travelled to this pocket of poverty on the Pyrenees Highway, that only had its train service to Melbourne restored three years ago after being cruelly ripped out by Kennett in 1993. It’s Labor territory: Joe Helper is the local state MP, Steve Gibbons was the federal member before the redistribution and Tehan will do well to win a majority.

Industry has never really returned en masse to the town — the recent opening of the True Foods factory (it makes wraps) has been a glimmer of hope but unemployment and drug and alcohol abuse remains stubbornly high. Drive-in, drive-out (DIDO?) workers are endemic.

Tehan’s trying to make the best of a difficult situation — on a chance trip to inspect the local men’s shed a few weeks back he noticed the adjacent Goldfields Employment and Learning Centre, opened by Labor legend Laurie Carmichael in the 1980s, might benefit from Tony Abbott’s Green Army proposal. Not, apparently, on work for the dole terms but because the unemployed youth at the centre were already planting seeds and raising shrubs in a greenhouse out the back. Manager Jane Gehrig, who has to deal with some tough kids, surprisingly praises the initiative — work done for nix now would be paid. It’s better than nothing, but still a long way short of a proper gig.

Our last stop is at Carisbrook, a town, like Avoca, with a population under 1000, held together, just, by the football and netball club. “There’s about 100 of these across Wannon,” Tehan explains, and he’s hoping to pop in to most of them before polling day. It’s a Monday so everything’s closed, and on a stroll down the deserted main street Crikey raises a recent letter sent by students from Tony Abbott’s alma mater at Saint Ignatius’ College, Riverview, that slammed the asylum seeker policy of both major parties as inhumane, unjust, illegal and, for Jesuits, unconscionable. Wasn’t it a fact that refugees are valued by rural communities for doing the jobs others won’t and keeping businesses afloat? And what about Malcolm Fraser’s recent likening of Manus Island to a gulag? Interestingly, Tehan tells a story of six Chinese families in Warrnambool on 457 visas who were about to be kicked out of the country. After years of appeals, a personal plea to then-immigration minister Chris Bowen’s office kept them here.

There are 91 booths in Wannon and, between now and Saturday week, Tehan will keep on meeting and greeting, making micro-announcement after announcement. The federal campaign will roll on, usually thousands of kilometres away, fixated on two underwhelming leaders and acres of empty rhetoric. I suggest Abbott’s already home and hosed. “It feels like we’re six goals up going into the last quarter,” the Tigers member says, “so we can’t take anything for granted.”

Barring an insurrection of course, Wannon’s his for as long as he wants it — it’s what happens inside this piece of old Victoria that’ll be forever taxing his mind.

“It feels like we’re six goals up going into the last quarter,” the Tigers member says, “so we can’t take anything for granted.”

You should have gone all the way to Portland and experienced the potholes in the local roads and highways. Local newspaper all over the damage. But it’s a nice safe state and federal Liberal seat.