McTernan seeks political asylum. Are John McTernan’s days in Australia numbered? Julia Gillard’s Scottish communications adviser, of course, was working under the 457 visa scheme (the one the Labor government wants to regulate further to ensure Aussie jobs come first). According to the rules, people visiting on a 457 visa have 90 days after the termination of their employment to find another sponsor. McTernan wouldn’t comment on whether he has secured a sponsor, saying: “I won’t give a running commentary on visa issues.” Perhaps Sky News, where McTernan appears regularly on The Contrarians, will lend a hand. Crikey understands McTernan’s employment technically ended at the end of July, not the end of June when Kevin Rudd resumed the prime ministership. That gives him around 60 days to find a sponsor or he’ll be shipped back to the mother country.

Candidate check: Malcolm Cole. Crikey has been enjoying filling in the gaps in candidates’ official bios. Turns out they often leave out the best bits! Here’s the official blurb from Malcolm Cole, LNP candidate for Moreton (Queensland):

But is he the same Malcolm Cole who provided PR assistance to NSW outlaw motorcycle clubs? We’ve emailed the LNP candidate to find out if he’s the same one.

Read Cole’s treatise on “protecting your reputation during a media crisis”. Certainly a valuable lesson for bikies everywhere …

Candidate check: Catherine King. As a federal Labor MP, Catherine King (the Minister for Regional Australia, Local Government and Territories) is a supporter of renewable energy — here she is talking up solar airconditioning. Her husband, Mark Karlovic, works at GDF SUEZ Australian Energy — which runs some of the country’s most polluting coal-fired power stations (think Hazelwood and Loy Yang B in Victoria). We’re not suggesting any impropriety whatsoever on King’s part here, just noting a connection. We checked this with King who confirmed it and pointed out this has been listed on her Register of Members’ Interests since 2012. Props to King for responding — most wannabe pollies have refused to help us fill out their official bios.

Do you know of any interesting connections federal candidates have? Don’t be shy, email Tips today.

Don’t take Hawke for granted. Babyfaced Liberal MP Alex Hawke, who represents the NSW seat of Mitchell, is warning voters that “Labor believes that they can take this seat for granted. They think they can just pocket your vote and once again fail to deliver.” Er, Mitchell is a safe Liberal seat on a cushy 17% margin. Which votes are Labor taking for granted exactly? Is this a cut-and-paste job from a different seat, Alex?

Is he finger-lickin’ good? Eye-catching graffiti in a Melbourne laneway … 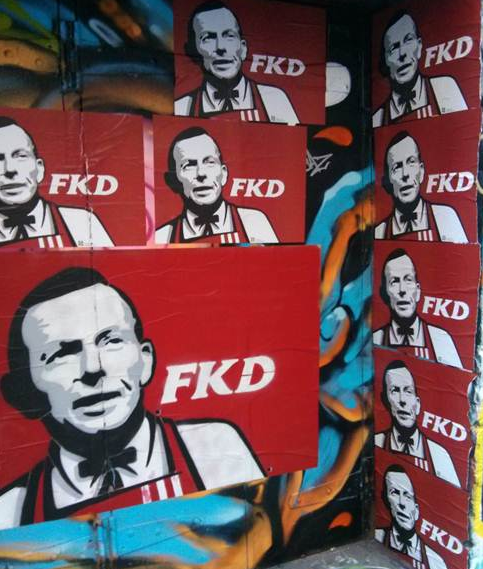