Is Tony Abbott doing enough to prepare Australians for tough times ahead? The Coalition has a chocolate policy, plus other political campaign bites.

Campaign reading. Richard McGregor, writing from Sydney for London’s Financial Times, contrasts Australia’s strong economy and paradoxically sullen national mood. “Abbott avoids tough economic decisions on way to Australia win” argues that the Opposition Leader has made little effort to prepare the electorate for the more difficult times ahead. Describing Tony Abbott as more protean than his narrow public image suggests, McGregor writes that he has long profited from his opponents’ underestimating his ability to change. He concludes:

“Anyone looking for courage and creativity in an incoming conservative government, should Mr Abbott win, will be hoping he can confound the sceptics again.”

The economics writer for the Murdoch tabloids, Jessica Irvine, continues to produce informative and balanced analysis of economic policies. She certainly cannot be accused of writing to anyone’s instructions. Her “Rolling out the pork barrel” offering this morning (the headline differs between states) updates spending promises from both sides. Her interesting conclusion:

“The Coalition’s plans are in need of a haircut — and they know it. Labor is running a fear campaign that large cuts are on their way.

“My fear is quite the opposite — that Mr Abbott won’t have the mettle to fix Australia’s looming budget crisis. This magic pudding approach to budgeting from both sides must stop.”

“Attila the hun or the honey” by Paul Kelly in The Australian seeks to explain how it is that the attacks on Abbott’s launch speech assailed him both as Mr Tough and Mr Soft. Labor insists that Abbott’s new promises doom him to “cut, cut, cut”, yet other critics say that the decade timeline on his iconic goals points to a craven lack of will on fiscal responsibility.

“The contradiction in Tony Abbott’s campaign agenda is embedded in the soul of the Liberal Party. As a classical liberal Abbott wants lower taxes, smaller government and the budget surplus, yet as an ideological conservative he wants extra spending to support the family, individual choice, tradition and stronger national defence. …

“The dual nature of the Liberal Party, paraded by John Howard as prime minister, is the source of its electoral success and its governing flaws.

“The success or failure of any Abbott prime ministership will hinge upon his ability to reconcile the nation’s fiscal challenge with his beloved vision for a better society and strong nation.”

Other views: blogs and tweets of note reveal a chocolate policy.

Which produced this reaction from the chief tweeter at the IPA:

And it is yet another day without a political story on the new.com.au most-read list.

Campaign listening: 4BC 1116 Brisbane. The slogan for the Fairfax station is “news talk”, and talking aplenty there was at breakfast this morning. But outside the half-hourly news bulletins Kim Mothershaw and Mary Collier steered well clear of politics. This election campaign, to their ears, clearly is not news. We had Australia at the top of some world charity index, a discussion of 200-square-metre housing blocks, which the Gold Coast mayor is seeking, and deaths from accidental drug taking surpassing those from road accidents for the first time. The real rise is in prescription drugs. Some people are addicted to them, others combine them with alcohol, and then there are those who have swapped out of heroin into prescription drugs.

Australians love Pink. Bruce Springsteen tickets are being scalped, and the AFL got a serve for its description of former Essendon coach James Hird. The suspended coffee movement keeps growing, and Broncos legend Michael Hancock reckons Karen Murphy, who has played in four rugby league cups for women, should join Mal Meninga with a bronze statue at whatever Lang Park is called these days.

The closest the breakfast morning got to politics was a criticism of Labor’s school halls program for having ceilings too high for ordinary janitors to change the light bulbs, thus costing P&Cs plenty of their hard-earned to hire scissor lifts to do the job.

The nightly television news. Those Liberals have learned the lesson about silly hats. The travelling media circus were made to look like clowns wearing their hair nets yesterday, but it was a peaked cap for Tony as he went on another of his factory inspections. 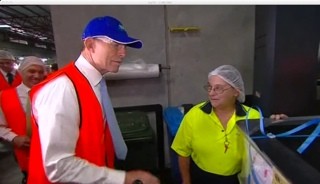 For the Prime Minister it was glorious shots of Sydney Harbour as he made his much-previewed statement about moving the navy from Garden Island some time in the future. Nice pictures but hardly a message to delight Sydneysiders,

Regarding the “chocolate policy” to subsidise Cadbury’s factory in Tasmania and “plant cocoa trees in Oz”:

I suppose these could be planted adjacent to the Daintree Estates existing plantation areas, in order to really rub in the fact that a foreign owned company might have its chocolate production subsidised while it competes against our far north QLD chocolate.