Do Rupert Murdoch's Australian newspapers determine election results; do they back winners each time? Henry Belot looks back at elections to 1975 to find out whether Murdoch really is a kingmaker.

Labor is screaming over biased reporting in News Corporation titles. But does the endorsement of Rupert Murdoch and his editors influence the outcome of elections?

The chequered record of editorial backing by Murdoch’s three major mastheads since the 1970s suggests a muted influence, at best, according to a Crikey search through the dusty archives …

Since the constitutional crisis of 1975, The Australian has officially endorsed eight successful candidates and five unsuccessful leaders — abstaining in 1996 when John Howard came to power. In an editorial column published every Friday before the nation heads to the polls, The Australian has endorsed 11 Liberal leaders and only two from the Labor side — Kevin Rudd in 2007 and Bob Hawke in 1984.

Rodney Tiffen, an emeritus professor at Sydney University, told Crikey it’s no surprise The Australian endorsed these two Labor candidates, given Rudd went on to enjoy a 23-seat swing in 2007 and Hawke prevailed over Malcolm Fraser after eight years in office.

“Occasionally the Murdoch press gives qualified and tepid support to Labor, but only when it’s likely that Labor are going to win,” said Tiffen. “When they give support to the conservative side of politics it’s all out and wholehearted — that’s what we’ve got with The Daily Telegraph this year.”

There are no tepid endorsements at the Herald Sun. Melbourne’s most-read newspaper has endorsed Liberal candidates at every federal election since the merger of The Sun News-Pictorial and afternoon broadsheet The Herald in October 1990. Four of these candidates proved to be winners, with the other three losing the election held on the following day … 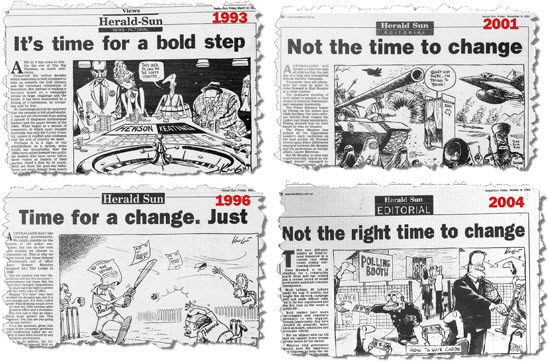 This party line is not restricted to News Corp, with The Australian Financial Review and The West Australian consistently endorsing the Coalition since at least the 1996 election — even in 2007, when Rudd was widely expected to easily claim victory over Howard.

At The Daily Telegraph — the tabloid seemingly hellbent to “kick this mob out” — the Sydney tabloid has backed six winners since it merged with The Daily Mirror in October 1990, while endorsing two losers. For a fiercely partisan paper its endorsements are split evenly — four for Coalition leaders and four for Labor.

Denis Muller, a senior research fellow at the University of Melbourne and former associate editor at The Age, says editors at Australian newspapers have never simply picked candidates they think will win the election.

“The proprietor’s or the board’s view will usually be based partly on ideological conviction and partly on self-interest — mainly, what will be good for business,” said Muller. “Murdoch has backed Labor and Liberal at various times, depending on what deals and promises he has extracted from the political leaders or on what he thinks will otherwise benefit the business.”

But with editorial endorsements often buried deep within print editions, the influence on voters is secondary to the political reporting of the paper. Influence is also tempered by the level of trust readers have in the papers. According to Essential Media research in January, only 48% of  people in New South Wales trusted The Daily Telegraph , with 50% of Victorians trusting the Herald Sun and 57% of Queenslanders putting their faith in The Courier-Mail.

Terry Flew, a professor of media and communications at Queensland University of Technology, says the influence of endorsements also depends on the paper. “Tabloid newspapers like The Daily Telegraph and the Herald Sun may have a wider influence than their readership numbers suggest given the demographics that they reach. Traditionally, these newspapers have been shared around the tearooms and work sites by readers,” he said. 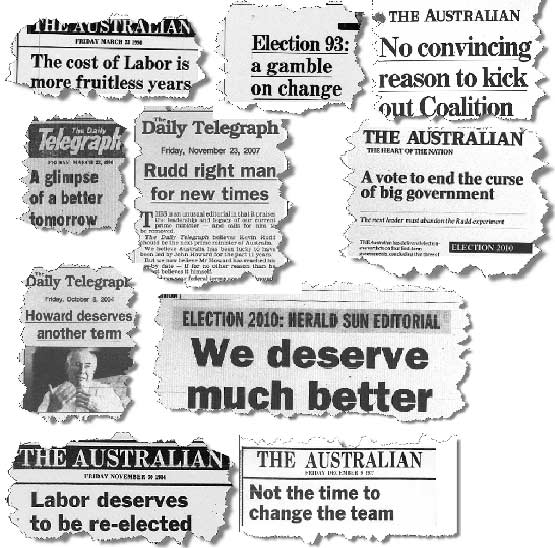 Muller told Crikey: “Newspaper editorials are read by a relatively small proportion of the newspaper’s total readership, and most of these would probably already share the newspaper’s views — which is one of the reasons people choose to buy a particular newspaper in the first place.”

According to academic research by Joshua Gans, the current Jeffrey S. Skoll chair at Rotman School of Management, and Andrew Leigh, who is the Labor MP for the federal seat of Fraser, editorial endorsement in Australia is highly correlated with observed bias in article headlines. Their study — “How Partisan is the Press? Multiple Measures of Media Slant” — also found that 77% of endorsements between 1996 and 2007 in all major Australian newspapers were for Coalition candidates.

Of course, many swinging voters make their minds up very late in the campaign, so editorial endorsements may result in marginal influence on the late deciders. But News Corp papers played their cards early on in the campaign this year, and there is little doubt as to which candidate the Tele will officially endorse … 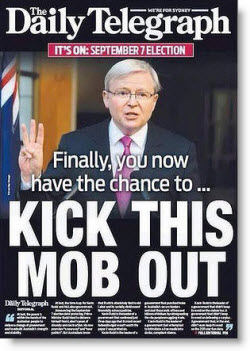 While the editorials might not pick it, their coverage leaves a lot to be desired.

For example, the Thomas Kelly gaffe by Abbott has only been covered in The Guardian, Fairfax papers and New Matilda. Compare that with Rudd’s gaffes (which deserved the coverage they got I might add). While Abbott’s sex appeal gaffe got plenty of coverage this wouldn’t be perceived negatively with the everyday punter as it wasn’t inconsiderate. But perhaps I’m being pedantic.

I reckon it’s more the editorial control (the framing) of what makes it to print – their view of what constitutes “public interest” and what we get to see of the news – and the years between elections, the sort of PR they spout?
They tried to save Howard for as long as they could between ’04 and ’07, but had to eventually let his hand go – to save their own reputation as much as anything? Then, after, it was back to business as usual – framing Rudd/Labor as incompetent?

[… see the next (NBN) story for m.o. spin – that can go on for years. Every negative aspect about Labor policy picked up, amplified and magnified.]

It’s not a question of endorsement. In this past 3 years or so the Australian, Telegraph and Courier Mail have been totally one-sided, with abusive and often ridiculous convolutions of “news” that even News Ltd has to defend as “satire”.
The people involved – notably Mitchell and the so-called Boris Whittaker – are not journalists. They are desperate courtiers, bending over as far as it takes to please the boss.And the boss is plainly a doddering, lonely crank.