Surfwear company Billabong is now essentially worthless after a rough day on the market. 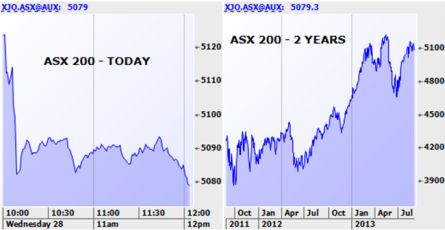 The market is down 61 points. The Dow Jones finished down 170 on reasonable volume. It was down 181 at worst.

The threat of US military intervention in Syria remains the central issue. The US has four warships with cruise missiles in striking distance although there is some debate about whether they would be effective. The UK recalled parliament to discuss the military response.

The Case Shiller house price index came in a touch better than expected, up 12.1% on the year although the number was criticised in some quarters as representing a speculative bubble in some states and not representative of a housing market recovery in general.

Consumer confidence numbers came in higher than expected raising expectations of a tapering decision next month.

The newswires mention the threat of debt ceiling negotiations coming up — The debt ceiling will be hit mid-October and Congress has yet to begin budget negotiations ahead of the new fiscal year starting October 1st.

The oil price spiked 3.92% on the threat of military action.

European markets down. Greece down 4%. Most other markets down over 2%. UK the best down 0.79%. Italy managed to sell 4bn Euro worth of bonds.

The Japanese market was down 0.69% yesterday.

The Chinese market was up 0.34% yesterday.

Metals down — The LME opened after the holiday on Monday with all the major metals down small.