Labor supporters tried to sell the Coalition's broadband plan overseas, but no one was buying.

Tele v Media Watch (again). Media Watch host Paul Barry says he is relaxed about The Daily Telegraph‘s threat to complain to the ABC, and the communications watchdog if necessary, about Monday night’s episode slamming the Tele’s election coverage. The Tele is furious that Media Watch didn’t contact them for comment before the program went to air, The Australian reports today. The paper won a similar stoush with the ABC show last year over a piece criticising Tele reporter Andrew Clennell. After an adverse finding by the Australian Communications and Media Authority, then-host Jonathan Holmes was forced to apologise on-air for not contacting Clennell for comment.

Barry tells Crikey this case is different: “This is not about one particular person. This is about more than 180 articles over a three-week period … It’s absolutely obvious what the Tele has done. I don’t know what you’d ask them anyway: why are you so biased?” He maintains there was “no editorial or ethical reason” to contact the paper. “They can go to the ABC and ACMA and we’ll abide by their decision,” he said. “I’m relaxed about it.” — Matthew Knott

Exclusive watch: the Oz. The Australian has broken out in a rash of “exclusive” dinkuses, with 14 stories being branded the Oz‘s own. Among them are a drop from opposition childcare spokeswoman Sussan Ley about childcare policy and the not-so-closely guarded secret of the topic of the next Australian Institute of Company Directors meeting (it’s growth). The Sydney Morning Herald has just one “exclusive” today, about a bill to be proposed in NSW Parliament to ban private schools from expelling gay students because of their s-xual orientation.

Chiko honour roll. This one comes to us from the Townsville Magpie. Townsville Bulletin regional editor John Anderson yesterday wrote a short comment bemoaning the death of the Chiko Roll. It is possible that the Chiko Roll’s significance can, in fact, be overstated: 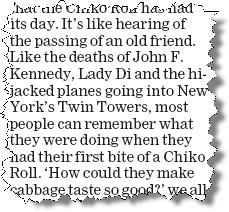 Time not on their side. Former Essendon coach James Hird is not having a good week. He’s been banned from coaching for 12 months, and his team has been handed some hefty penalties in the wake of the peptides scandal. And his lawyer isn’t even being given the right time to front up to AFL House. Age footy writers Caroline Wilson and Jon Pierik included this gem in a story about Hird’s prospects: 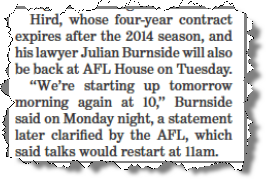 Was that really necessary, or is the AFL sticking the footy boot in?

Video of the day. Labor-affiliated group “I Want My NBN” tried to sell Tony Abbott’s broadband plan all over the world, as Abbott has said 25 mebabits per second was more than fast enough for anyone. The response from people overseas, some of whom already have access to much faster internet services, was recorded for posterity:

Front page of the day. Using a font usually reserved for wars and assassinations (in fact, the font on the headline “America attacked” on September 12, 2001 was considerably smaller), Melbourne’s Herald Sun has brought sufficient gravity to the story of a maybe banned, maybe questionable substance being used by a middling football team in a Melbourne suburb. 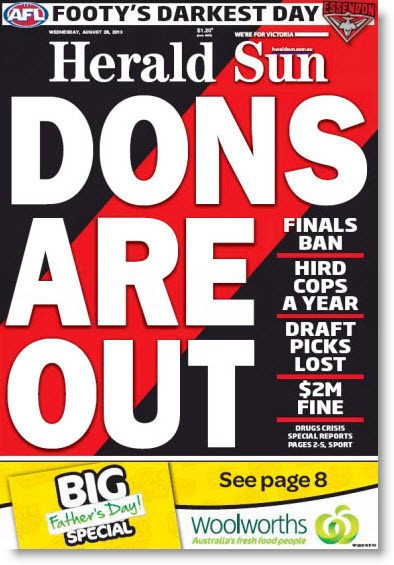