Labor campaigners have been caught red-handed ripping down Liberal Party posters in Western Sydney. Party HQ has sacked the staffer and volunteer from the campaign. 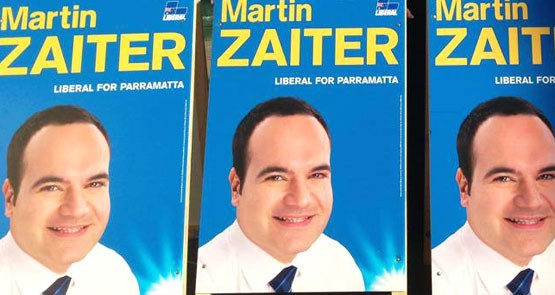 A staffer and a campaign volunteer for marginal Labor Parramatta MP Julie Owens have been stood aside after being nabbed by New South Wales Police illegally cutting down Liberal Party posters with box cutters.

Crikey can reveal officers sprung Owens apparatchiks Wayne Tupackovski and Jordan Varghes ripping down posters of Liberal challenger Martin Zaiter on Wednesday night from area light poles. The duo are expected to be issued with fines for possessing stolen property.

After seizing the bounty, police returned around 17 Zaiter posters to Liberal headquarters.

Tupackovski worked as a volunteer co-ordinator and a casual staffer inside Owens’ electorate office, while Varghes was not on the official books.

Crikey understands some of the Liberal posters were wrapped around poles in technical contravention of the NSW Graffiti Control Act; however, under local lawas these can probably only be removed by council rangers, not vigilantes. A Monday night meeting of Parramatta Council resolved to address the issue of election posters, admitting that the council lacked an official policy.

Independent councillor Paul Garrard said that posters in the area “make the place look untidy and makes the place feel unsafe … how can you love your area if it’s being plastered, trashed, raped and pillaged by the Liberal Party who decide all of a sudden they know where Granville is? This is nothing more than official vandalism.”

A spokesperson for Labor’s campaign headquarters told Crikey yesterday: “This unacceptable behaviour has been dealt with promptly by the NSW branch in the appropriate way.”

Owens is battling to hold on to the key western Sydney seat with a margin of just 4.4%.

A spokesperson for the Liberal Party’s NSW office said Zaiter was busy focusing on his campaign.

Stolen property? Unless I am missing some detail these signs were left on public property. Fair game as far as I am concerned. And the police are involved? Wow. What a ridiculous waste of tax payer resources.

After Rupert Murdoch’s plastering, trashing, raping and pillaging of the Labor Party, by the Liberal Party, via his tame editors it would appear to be blatantly obvious which one is the aggrieved Party.

More hypocrisy from the left. Anything against Rudd is unfair, malicious and should be stamped out via regulation but anything against the Liberal party is fair game and a waste of taxpayers money to police. I keep saying that the left contain the biggest hypocrites I know.

End of the day, this was grubby. Very grubby.

Also busted for the girls in last weeks people formum, who bragged later on Young Labor Facebok page, that Labr paid her $50 and she is a Young Labor member