Prime Minister Kevin Rudd has been acting more like an opposition leader with his promises of change, while Tony Abbott has been acting as if Kevin 07 never happened, assuming the mantle of John Howard. 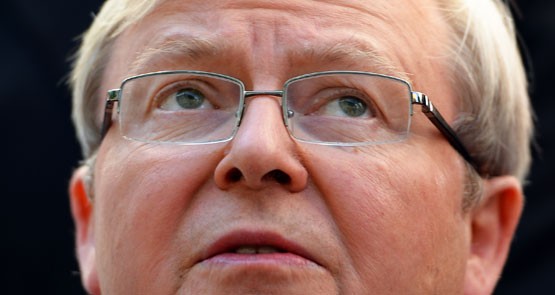 If you believe the polls the buzzards may be circling for Prime Minister Kevin Rudd, yet he has clawed his way back to the top of the national media coverage ladder, having relinquished it to Opposition Leader Tony Abbott (with 41,437 mentions) last week when paid parental leave was the number one election issue (getting 21,937 mentions).

Since then, the PM has regained some political oxygen both through continued personal attacks on Abbott (while Abbott has mainly left the personal attacks on Rudd to senior colleagues like Chris Pyne and Julie Bishop as he remains doggedly committed to trying to appear “prime ministerial”) and by building a foreign affairs platform around the Syria conflict. Tonight’s leaders’ debate at Rooty Hill will need to be far more telling than the first two if Rudd is to make any late comeback.

It’s been a presidential-style campaign thus far — our coverage numbers reflect a massive gap between the respective leaders and the rest of the pack — but with the PM running more like an opposition leader while Abbott continues to emphasise his experienced team, almost implying the Howard government never ended.

Former PM Julia Gillard was returned to the conversation this week when it was revealed she won’t attend the ALP campaign launch. But were it not for print media coverage she would be further down our list. Deputy Prime Minister Anthony Albanese, meanwhile, hit the campaign trail spruiking a high-speed rail route between Melbourne and Brisbane (which rings a bell from the 2010 campaign, no?) while Abbott responded with roads, roads, roads.

Discussion around the NBN was not the only thing garnering headlines for opposition communications spokesman Malcolm Turnbull; independent Tony Windsor threw his support behind Turnbull as his preferred option for PM. Windsor’s retirement from the seat of New England has opened the door wide for Nationals candidate Barnaby Joyce, despite the straight talker infuriating some in the electorate with his decision to put One Nation ahead of Labor and the Greens on his how-to-vote cards. 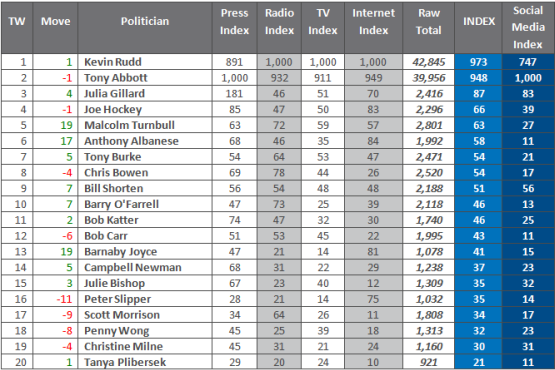 Miley’s risque performance at the Video Music Awards caused a stir on TV and social media.