Essential: state by state, Labor could cling to power

Crikey has crunched the numbers, state by state, and found Labor could hang on to government due in large part to OK numbers in Queensland. But Tasmania looms as Rudd's nemesis ... 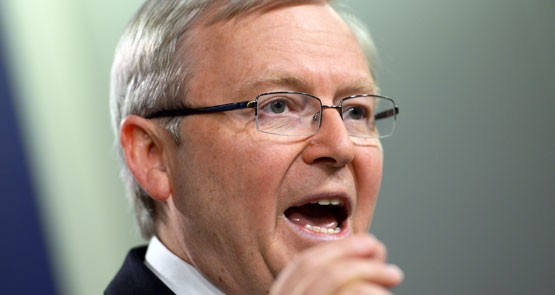 A rise last week in Labor’s vote in Queensland would be enough to deliver victory to Kevin Rudd, the latest breakdown of Essential Research’s polling data shows.

A state-based breakdown of Essential’s data over the last four weeks, including the first three weeks of the election campaign, shows Labor headed for a narrow win on a two-party preferred outcome of 50%. The sample size of the combined data is just under 3700. 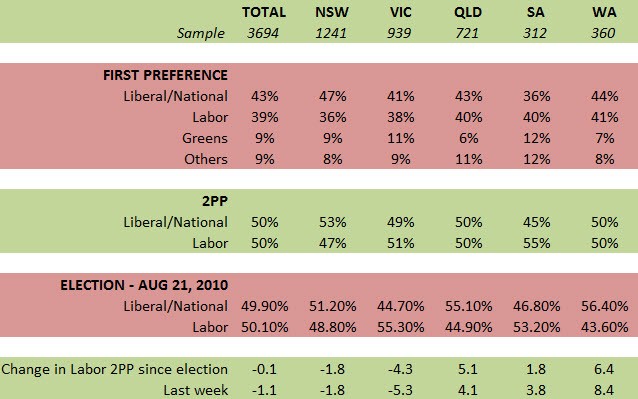 Compared to last week’s breakdown, there has been no shift in NSW (sample size: 1241), where a 1.8% swing would hand the Coalition four seats, in addition to their picking up New England and Lyne. In Victoria (sample 939), Labor has edged ahead of the Coalition 51-49%, but that is still a hefty 4.3% swing against Labor from the last election, which would see the loss of three seats. The Greens are on 11% in Victoria, the sort of vote that should see them pick up an extra spot in the Senate — and who knows, Adam Bandt might yet hang on in Melbourne.

In Queensland, critically, Labor has moved back up to 50-50% compared to 49-51% last week. This produces a swing of 5.1%, enough to deliver up to 10 seats to the government, including Peter Slipper’s seat of Fisher, which LNP candidate Mal Brough was expected to win.

However, in South Australia and Western Australia, the big swings to Labor we noted last week have reduced markedly — a reflection of how the numbers can bounce around with small sample sizes (both are 300-400). In SA, Labor would pick up a swing of only 1.8%, yielding one seat (Boothby). In WA, the swing is now 6.4%, down from an improbable 8.4% last week, which would yield five seats to Labor. The Greens vote has lifted to 12% in South Australia, suggesting Greens Senator Sarah Hanson-Young’s prospects of re-election are improving, but the Greens remain stuck on 7% in the West — a danger signal for Senator Scott Ludlam.

On that basis the Coalition would be left on 66 seats, with the Greens (maybe), Andrew Wilkie and Bob Katter holding one each and Labor holding 81. From that, however, you have to adjust for Tasmania, where Labor is expected to lose at least two seats, making it 79-68-3. And the WA figures, suggesting a swing to Labor of over 6%, still look problematic, albeit more realistic than last week’s. Five seats is unlikely, and if they fail to materialise, we’re back in hung Parliament territory.

Next week we’ll have the last of the state-based breakdowns, covering the first four weeks of the election campaign.

Interesting results. Like Warnie’s ball against Gatting, there’s a bit of late drift happening. Its not over yet folks. Even if Abbott does win, as its close, he probably won’t get the Senate, which means no changes to the Carbon tax and the Mining Tax until he can call a DD election (late next year at the earliest). A DD election fought on the Carbon tax and climate change – without Rudd, now that would be an interesting campaign!

Please no?
“Abbott by a bum (one seat)”, so he’ll have to live by what the electorate give him, like Gillard – and he’ll be on the receiving end of the sort of crap she got; from him and his “rooters” (as in “rooting for him”)?

Aggregates are useless. It’s a seat by seat question and the Libs are miles ahead.

State aggregates are very useful when it comes to the Senate.

Klewso, what makes you think Abbott would be on the receiving end of any crap if he won by a seat ? He was the one dishing out the crap.