Sam’s the man. Yesterday we wondered aloud what professional bigmouth Sam Kekovich said to upset people at a fancy lunch at Sydney University Football Club (that’s rugby to you plebs) on Friday. A sporting tipster obliged:

“Not sure why they chose an AFL person to MC a rugby lunch anyway. Seemed he was doing his best to impress the ‘Sydney’ crowd (he kept saying he is from Melbourne), predominantly males and his script was definitely aimed at poor humour eg telling story about celebrating his 20th wedding anniversary, decided to replicate a scene from years earlier and eat breakfast nude on the balcony together. His wife remarked, ‘my nipples are still as warm for you as they were when we first met’ to which he replied ‘well of course they are because one is hanging in your porridge/cereal and the other is hanging in your coffee’ … I really did not laugh. Unfortunately many of the men in the room did.

“While the crowd was predominantly males there were a number of women present in the room who would have (should have) been upset by this and his many other comments. Particularly when sports are apparently trying to encourage female participation etc …”

Charming. Thanks to Sydney University Football Club for facilitating this.

Class action. Which large Melbourne law firm is preparing a class action against the Victorian Parole Board on behalf of the victims of parolees? There’s been a tragic spate of rapes and murders by men on parole, stretching back years.

Candidate check. Crikey is keen to bring you the full story on candidates at the federal election, as we’ve found they have a little habit of leaving the best bits from their official bios. Yesterday we reminded you that Liberal candidate for the bellwether seat of Eden-Monaro, Peter Hendy, was chief of staff to then-defence minister Peter Reith during the time of the “children overboard” affair.

Today, why has John Alexander, Liberal for Bennelong, forgotten to mention that he was an umpire on the memorable Australian TV series Gladiators? Enjoy the opening credits here (warning: strangely compelling). Is this Alexander hard at work separating Hammer and Cheetah on the pyramid?

Crikey is keen to keep filling the gaps on who the candidates really are. Email us here (and you can stay anonymous).

News corpse #1. You may have noticed the News Corp papers are taking a rather pro-Abbott line (sample Daily Telegraph story: “He has been talking non-stop about Tony Abbott’s cuts, but Prime Minister Kevin Rudd was cagey when questioned about a cut on his knuckle today. Mr Rudd was sporting a noticeable Band-Aid on his hand which wasn’t there yesterday …”). The tabloids have been regularly photoshopping Rudd and his colleagues as everything under the sun (prison guard, fascist …). We heard this from an anonymous mole:

“A friend of mine works at one of the Murdoch papers and said he overheard a conversation on the weekend from one of the artists working on those oh-so-funny Rudd photoshops. The gist of it was ‘I hate doing these. I don’t like Rudd but I really don’t like Tony Abbott, but, you know…’.”

News corpse #2. You wouldn’t listen to a critic of Rupert Murdoch if he were fat and vain, would you? That’s what The Australian argues, anyway … Eric Abetz lap-dog and The Oz’s Israel reporter Christian Kerr took on British Murdoch critic Tom Watson this morning. Apparently Watson is (shock horror):

Normally Tips refrains from commenting on someone’s physical appearance.  But let’s apply the Kerr precedent to the good man himself. We’d note that Kerr has put on a few pounds in recent years and is known for his sartorial elegance (his pocket hankie is the talk of the News Corp press gallery bureau). Thanks to colleague Malcolm Farr for tweeting these images last year: 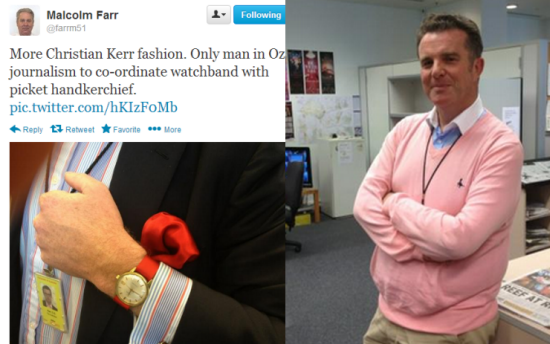 News corpse #3. News Corp’s chief information officer, John Pittard, is to retire on November 1, and a mole reckons there are still some significant techie issues at News. There’s still plenty of talk about the large-scale Eidos system. So who will replace Pittard — is there an heir or heiress apparent with experience in the real world of media? At least one News mole doubts it … the company is hunting for a replacement. We put this to News, who pointed us to the company’s media release from yesterday.

Squeaky clean ABC. Nice to know Aunty’s reporters are clean as a whistle …

Building Management will be trialling automatic hand sanitisers within each of the three lift lobbies located on the ground floor and one in the northern lift lobby on the lower ground floor.

To use just place your hand under the automatic dispenser and moisturising hand sanitiser will be dispersed. 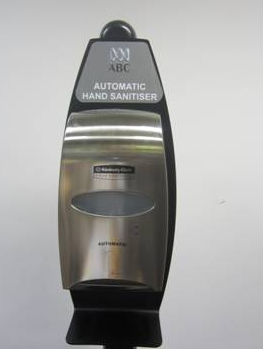 If one of these happens to go astray, it would look wonderful in the Crikey office …

At a quick glance the photo of Kerr looks like Christopher Pyne dressed for a weekend picnic.

Geez the ABC must be flush with money!