In the vamping hour, questions for MPs (and Wil Anderson)

It's safe to say we have entered the doldrums of the campaign. So it's time for the big questions. Like what happened to Warren Truss? And are Chris Bowen and Anthony Albanese the same person? 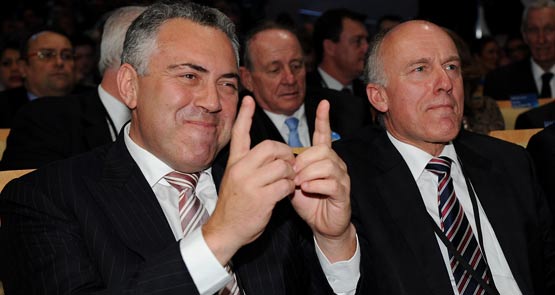 So with Tony Abbott announcing a special compensation package for Australian terror bombing victims and Kevin Rudd announcing moving Garden Island naval base to Brisbane, it’s safe to say we have entered the doldrums of the campaign, the vamp till ready. Abbott won it of course.

He’d won the day by 8am this morning unless anything goes very badly wrong; some survivor of the Bali bombing comes out and says this is bullshit, I don’t want more money for being shredded by nutjobs, don’t enroll me in your nationalist crap, commit to fully funding a national disability insurance scheme and don’t pick winners and losers from human suffering …

Abbott wins the day on the big media.

Rudd, by contrast, is talking about moving Garden Island to Brisbane, just about the most boring thing anyone to say to anyone anywhere. But of course it’s micro-strategy again, because there’s a thousand or so freelance tradies in Griffith, etc, who could do with a bit more billing who, listening to the news, suddenly prick up their ears and think about the next five years, and that might be enough for them.

That’s micro-strategy. If Rudd wins this, that is how he will have won it. Under the radar of the News Corp big beasts, the agitprop churners at The Daily Telegraph and the confected reticulated polling, it will be the patchwork, the this and that, the welders and the carers, each given a reason to stay with or come to Labor.

Of course, if it doesn’t, it will just look like the most inept campaign in history. But that’s how history works. Had the Australian Electoral Commission chosen different boundaries in 1997, Kim Beazley would have been the PM who knocked off John Howard, a legend, and Howard himself a footnote, a punchline. That’s how it goes.

Now to the issues …

Joe Hockey, looking smooth, dude. I’m going to run a sweep on when you will regain all your lost weight and donate the proceeds to a medical charity. If you don’t participate, you hate sick people. I will be in touch.

Warren Truss, Warren, call home. You don’t need to come back. Mum and I just want to know you’re all right.

Sophie Mirabella, people diss, but you’re the one. Indi? Go girl! Every since I’ve known you I’ve always thought of you as an Indigo Girl. And so has everyone who ever knew you when.

Chris Bowen, are you actually Anthony Albanese? Is there only one of you? Are you all stamped out in some factory? Is this our last manufacturing industry?

Senator David Feeney, a question: your wife’s name is Liberty Sanger. Doubtless it’s a love match, but were you also attracted by the fact that her name means “free sausage”? Batman voters need to know.

The Morning Show discussing politics. I’m used to US brain-dead TV, but this is like TV being hosted by fuschias. Where do they get these people? From the same vat they grow folks like Troy Bramston I guess.

Wyatt Roy, seen at the Liberal launch, is not Abbott’s mini-me. He’s mini-me’s mini-me. Bonsai Liberal. The fat kid from Hey Dad on the Hockey diet. Were he abducted, his milk carton photo would be a life-size portrait.

“Memo to minders: Rudd has to stop looking like a panda that zookeepers are coaxing to mate.”

Memo to minders: Rudd has to stop looking like a panda that zookeepers are coaxing to mate.

Albanese has the ability to make a an $800 suit look like a $300 suit. To preserve his working-class credentials he does not remove the dry-cleaner’s coat hanger before donning the jacket.

But enough of the future direction of a country of 25 million. What’s happening with a football club based in Essendon? Let’s talk about that for 16 hours. Even better, let’s not put more journos on the campaign trail. Let’s have them stand outside AFL HQ for two days in case someone comes out.

Who’s that bloke next to Virginia Trioli on the ABC breakfast couch? He looks like he might be the bloke who does her drag version at the Greyhound Hotel, sans maquillage. Freaky like 30 Rock, where Jenna stalks her stalker.

For 10 minutes I watch TV thinking I’m on Sky News only to realise it’s the hotel check-in channel. I tune to Sky and then ABC News 24. Then I tune back to the hotel channel.

There is no question that the only show on which pollies get a genuine no-bullshit grilling is The Project. Is that a cause for despair or rejoicing? Discuss. Show your work.

Further to that, and re Wil Anderson on Gruen, why is every Oz male comic trying to look like Ben Chifley? The hair, the suits. It’s like I’m watching a newsreel.

The Daily Tele journo on the trail, laughing in embarrassment at her paper’s front pages, saying something about The Sydney Morning Herald doing the same. Mate, you didn’t believe it, even as you said it. You produce raw material for a propaganda outfit. Don’t waste your youth, your life. Get out while you still can.

Dear Greens: the reason there’s only two continents without high-speed rail are Australia and Antarctica are LOOK AT A DEMOGRAPHICS MAP! This is public transport fetishism IMHO. Put the money into a research institute for a clean jet engine — thus creating an Australian smart industry — and short high-speed links from city centres to airports, fast light rail going directly to the gate. By the time you build a high-speed rail system in 2035, the Chinese will be running hyperloops from Beijing to Shanghai. It’s over.

Press tip: Mark Riley, of Seven, is actually 159 years old. He was Henry Parkes’ press officer. After that, he was lead singer with the Huxton Creepers. Somewhere, in an attic, there’s a portrait of a very old dude with tousled hair. This is all true, ‘cos I read it in the Tele.

Paid parental leave, the missing story: the strategy was got from Sweden in the ’90s, when the right-wing moderate party (Sweden has a Moderate Party and a Centre party, the only place where the Centre has a split). Knowing that Swedes were wedded to socialism, the Right found a different version of it, familialist, as opposed to the Left’s focus on free childcare. Huge and instant success. My role in this, here: in 2007, living in Sweden, I had a long conversation with the late Christopher Pearson about how great it was to live in a place with a high birth rate (1.8 children per women), and where middle-class women had kids in their 20s, because there was no huge professional backstep from doing so. So the streets and cafes filled with mums and dads and kids — and actually better fulfilled the familialist vision of the Right than Italy or Spain (birth rate 1.1 cpw) where every child in the street was mobbed by child-hungry would-be grandparents, like something out of Children By Men. “Very interesting,” said Christopher. Make of this what you will.

Abbott’s presser this am, tears everywhere, Bali bombing victims, hugs. Rudd’s presser late am. About Garden Island, like stocktaking day at Bunnings. Man, this better be a strategy and not pathetic vamping by the hopeless time-serving secondraters who now constitute much of the Labor core staff …

Terror compensation, moving a base that was going to be moved anyway. Who can deny we are vamping? But the proposition at least — by nips and bites, here and there, by relentlessness, and going the tonk on PPL — Rudd and Labor are getting this back in range.

Sounds like you’re a bit tired and emotional Guy. Don’t worry I’ve had enough too. But lay off the fuschias, they have far more intellect that your average morning show host.

Mr Rundle, have you been in the UK too long? A “sanger” is a sandwich, not a sausage! Easy mistake to make I suppose, given the similarity of the terms “banger” (notwithstanding the recent Gok Wan usage) and “snag”.

Even if a research institute that succeeded in coming up with a clean (and arguably more importantly, cheap) jet engine, it would create a Chinese smart industry, not an Australian one. Just look at what’s happened to the German solar industry. As Keane says above, we don’t do manufacturing.

Guy, I wish we all had a hotel check-in channel to relieve the standard televised dreck.

PPL, the NBN and the LNP’s latest prediction of an identical date to the govt’s tp return the books to black ink should give Rudd plenty to work with.

Now the suspense of knowing if – or if not – the Opposition Leader is man enough to appear on Q&A. Why is he so afraid? What is this fearful condition to be commonly known as: Jonesaphobia? Q&Aaphobia? ABCaphobia? Gutless?

Speaking of Sky News, is anyone else getting fed up with Kieran Gilbert’s sycophantic interviewing of most of his LNP guests, and his almost rabid attacks on their Labor counterparts. I know Rupert pays part of your salary Kieran, but is there any chance of you trying to approach your interviews from a non-partisan position?