Kevin Rudd has mapped out his foreign policy priorities for the next term, talking Syria while shifting a major naval base and resisting the temptation to boost DFAT. Freelance journalist David Donaldson tuned in. 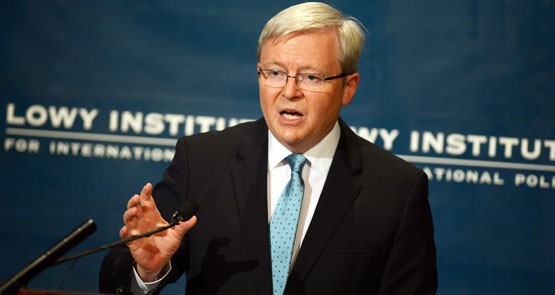 Prime Minister Kevin Rudd appears to be gearing up for an allied intervention in Syria, telling an audience at Sydney’s Lowy Institute this morning that he would not “turn a blind eye” to the crisis.

“This is a crisis of historic proportions. It is not just one of those crises that happen,” Rudd said. “In the hindsight of history I do not want to be in a position of responsible political leadership where I was party to turning a blind eye, and I won’t.”

Stating that Syrian President Bashar al-Assad “is in all probability responsible” for recent chemical weapons attacks, Rudd said the international community could not ignore the attacks. The PM spoke to US President Obama this morning, and said the US is consulting allies and considering “the full range of options” on Syria.

America and its allies must send the message that the use of chemical weapons by anyone is unacceptable, Rudd said, framing any potential military intervention as a response to a violation of the norm against chemical weapons.

Security and economics were the twin focus points of Rudd’s speech today, in which he sought to map out his foreign policy priorities for the next term — should he win.

He detailed the plan to move Australia’s main naval base (currently located Sydney’s Garden Island) north and west. In a policy previously costed at up to $6 billion, the government plans to move parts of the Sydney base base to Brisbane and Perth. Rudd argues that this would free up space in inner Sydney while placing naval assets, including new amphibious assault vessels, in a strategic position closer to any potential threats.

Such changes would take advantage of Brisbane’s role as a transit point for submarines, claimed Rudd today, and allow for increased co-operation between navy and army forces, the latter of which are primarily based in northern Australia. Rudd also flagged upgrades to military capability in Darwin, Cairns and Townsville.

Explaining the changes in terms of Labor’s “Northern Australia” policy, Rudd said the move would create jobs in Brisbane, Darwin, Townsville and Perth. Disputing New South Wales Premier Barry O’Farrell’s claim that it was a threat to the NSW economy, Rudd argued that the plan would also bring jobs to Sydney by freeing up capacity for the cruise industry and offering more green space. Rudd pledged he would create a taskforce to report back after two years on how this move will proceed.

Earlier this year, the government’s Defence White Paper concluded “the government has decided not to proceed at this time with long-term planning for establishing a supplementary east coast fleet base in Brisbane” because it “would be challenging and require significant continued investment for it to remain sustainable”. Instead, Rudd today cited the 2012 independent review that suggested that increasing cruise ship traffic in Sydney Harbour would eventually require moving the naval base north.

In keeping with the security focus of today’s speech, the Defence Department received another boost with Rudd promising to raise spending to 2% of GDP, though he did not specify a timeline for achieving it. Australia’s military budget currently sits at around 1.56% of GDP, putting Australia in line with many European states.

Looking to Asia, Rudd argued that strengthening the security architecture of the region was important, as recent crises in Kashmir and the East and South China Seas have demonstrated. He said the government would continue to keep up its efforts at being a “creative middle power,” which has seen Australia elevated to the most important security and economic fora in the world, the UN Security Council and the G20.

Among the usual discussion of engagement with Asia, Rudd asserted that Australia “cannot afford to have all our eggs in one basket” — i.e. China — now that the mining boom is coming to an end, and would be well-placed to export services like education and training to a growing Asian middle class. He also announced that Australia would take “an activist role” in putting jobs on the agenda of the Brisbane G20 forum next year, and said he believed China should become a part of the free-trade Trans-Pacific Partnership scheme currently under negotiation.

Interestingly for a former diplomat, Rudd declined to commit to increasing DFAT’s notoriously threadbare budget, citing recent diplomatic successes such as the Security Council seat as evidence that the foreign services were already doing a good job regardless of the numbers.

This is yet another indicator of the strategic brilliance, not to mention arrogance, of our latest Prime Minister. It may have been rude of KRudd to not tell the Barry O’Farrell first, but perhaps even Mr Rudd is no longer believing his own thought bubbles (fantasies may be a more appropriate word); after all, so far he seems incapable making his many and varied thought bubbles actually happen (although his predecessor and the ALP may hold a different view). I prefer to think he is merely capricious. And just a thought, if the Naval base ever moves, would the unemployment it causes benefit the business interests of the PM’s partner (Ms Rein)? I don’t know.

So little Kevi got his orders from the Gr8 Satan’s warmongering leader & will toe the line given that the US takes 35% of our GDP…..nice work Kevi, as it would have been identical if Little Tony was PM.

As the National of Islam’s leader Louis Farrakhan has said on the record, “There’s a murderer in the White House”. For mine all Australians who refuse to speak up against further US war crimes globally are accomplices to the murders about to take place in Syria.

Once again the Pentagon hawks & their MIC boosters hold sway over global geopolitics…and of course Bibi & his fascist cronies are salivating at the prospect of a regional war across the Middle East.

So, the UK and the USA need to boost their economies with a new war. They’ve chosen Syria claiming they don’t need any evidence that the Syrian government is responsible for a so-called “chemical weapons” attack. It is interesting that UN inspectors cannot get to the site to check on these claims because of snipers. The Syrian Government gave the permission for inspectors to investigate.

I’m asking everyone to look at who has most to gain from the invention of the USA and UK (with Australian being dragged along on their coattails) in the Syrian conflict. Those with the most to gain are the British and US defence industries and also the Syrian rebels. The Syrian Government would have everything to lose by a chemical attack on their citizens. Is the Syrian government completely stupid or are they not responsible for this attack?

I cannot believe what I’m hearing from the US,UK and Australian warmongers. They are going in without UN sanction and without evidence. Is this going to be Iraq 2 all over again?

It’s hypocritical to say the least to criticise Obama for war crimes when possibly going head to head against Bashir of all people. How many war crimes has he committed?

FYI technically the US’s use of drones is not a war crime as the targets are identified enemies of the state.