Both parties are so wedded to the idea of balanced budgets that they are making election promises for their grandchildren to carry out.

Campaign reading. This election campaign gets stranger and stranger. Politicians from both the major parties have got themselves so tied down with their promises of balanced budgets that they have to push their promises to spend anything substantial further and further into the future. Yesterday it was Labor’s turn to add moving military bases to the north to its promised very fast train between Brisbane and Melbourne, with both projects not actually scheduled for decades.

David Wroe tells part of this future news story in his Sydney Morning Herald piece “Garden Island naval base faces closure under Kevin Rudd“. It previews an option unveiled in a speech to the Lowy Institute that will involve the complete closure of the navy facilities at Potts Point, opening the land to commercial development and dramatically increasing berthing access for cruise liners.

“Mr Rudd will pitch the proposal as a sensible strategic plan to move defence facilities closer to any further threat from Australia’s northern approaches.

“It is understood he favours scaling back Garden Island and possibly closing it over time, even though this is likely to bring him into conflict with military chiefs.”

While Prime Minister Kevin Rudd tells us about what he will do years down the track, Opposition Leader Tony Abbott keeps refusing to talk about his actual plans for an immediate future. That’s something Alan Kohler touches on with “Abbott’s secret Fightback plan” on the Business Spectator website:

“… the thing that sets this election apart from all the others is that it comes at the end of a rare period of minority government, for the first time since the election of 1943. Following the 2010 hung parliament election, the Opposition decided it could be asked to form government at any time, so it developed a complete set of plans for government at the beginning of the term rather than the end, as usual. So you wouldn’t know it, but the Liberal National Party Coalition has for almost three years been sitting on a full, written plan for governing Australia. It is, by all accounts, one of the most detailed and exhaustive plans for government ever prepared by an opposition party.

“But it has never been made public. That’s because the person charged with pulling it together from detailed discussions with shadow ministers as well a huge range of community leaders, has been Andrew Robb, the shadow finance minister, who was also responsible for Fightback! — the detailed policy that cost John Hewson the ‘unlosable election’ of 1993.”

The Age’s Tim Colebatch, the leader on our campaign journalists’ honour board, has secrecy about the actual plans prominent on his list of “Why we should not trust Tony Abbott“:

“The real disappointment of Abbott’s campaign is that he doesn’t trust us. Economists estimate the funding gap in the Coalition’s promises at $30 billion to $35 billion over the next four years. But Abbott won’t tell us how he will close that gap until the final days, fearing we would be less likely to vote for him if we knew what he plans to do.

“How can we trust anyone who won’t tell us how he will make us pay for his promises? Let buyers beware.”

“Time for Rudd to give a full-throated defence of Keynesian stimulus” — John Quiggin on the Guardian site writes that as long as the Liberals are seen as superior economic managers, cuts can be presented as a matter of stern economic necessity. Rudd is well placed to fight this.

Other views: blogs and tweets of note about opinion polls and things.

Another politics-free day on the nation’s most-read news site. 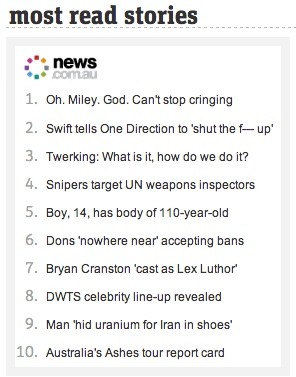 Campaign listening: Ray Hadley 2UE Sydney. He tops the ratings in his city, but all that says to me is there must be a lot of converted people who like being preached at. It was not what I would call a pleasant way to spend a morning. Ah, the things I do to earn my dollar.

Ray has dollars on his mind much of the time, too. This morning’s obsession was with the corrupt officialdom in Papua New Guinea, which keeps getting its hands on the millions of dollars of aid money we send to the country. His story, based on a Seven Network current affairs show last night, was interesting enough with its suggestion that Australian banks happily handled the ripped-off money. But then there followed the fear mongering that a failed country would end up flooding Australia with thousands of Papua New Guineans coming down here to seek asylum as refugees.

The nightly television news. There was Kevin Rudd on the floor at a childcare centre with the kids building things with Lego while talking about very fast trains sometime in the never-never future. It beat the Abbott claim that he would be the infrastructure prime minister. The Opposition Leader had no vision to go with his talk about spending more money on roads, and that couldn’t compete with pictures of a very fast train.

The daily election indicator – Labor at a new low. On the Crikey Election Indicator this morning Labor hit its low point for the year – down to 8%. That assessment of the probability of the government being returned is lower than the previous low of 8.7% recorded back in May when Julia Gillard was still Prime Minister. The fall on thee day was two percentage points.